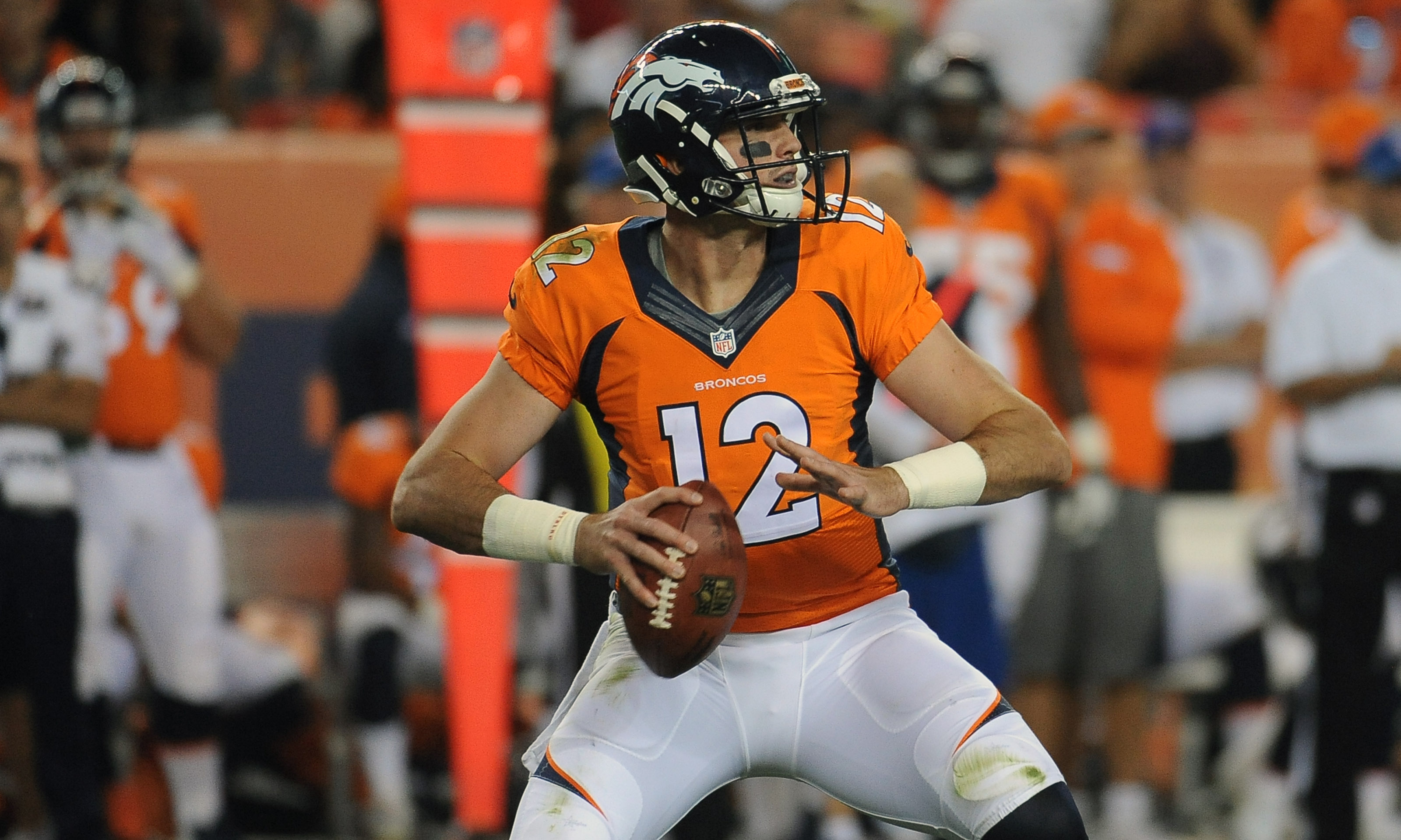 In the NFL, sometimes players bust and sometimes they pan out big time. As for former first-round QB Paxton Lynch, the Denver Broncos placed him near that bust label officially after waiving him this past week during the final roster cut-downs. The Broncos signed Case Keenum to a two-year $40 million deal in the off-season and have decided to roll with 2017 Mr. Irrelevant Chad Kelly and recently acquired Kevin Hogan as the backups. Lynch now is a free agent after clearing waivers and teams around the league are likely to be interested in the potential of the 24-year old raw QB.

Our friends over at Draft Diamonds confirmed that while the Rams could have interest, they have yet to reach out to Paxton Lynch in the event of a potential signing to the active roster or a placement on the practice squad. I brought up the idea of the Rams bringing in Lynch as a developmental QB on the podcast and on social media. It seems to me his fan approval rating is like is draft label “boom or bust” and so it remains to be seen if the team could in fact bring him in. Overall, the Rams like Sean Mannion as the backup at least one more year but their puzzling keep of Brandon Allen on the 53-man roster leaves a bit to be desired. Today is Brandon Allen’s birthday and he just turned 26, which means he’s now three-years older than starting franchise QB Jared Goff and the same age as backup Mannion. As far as long-term potential and developmental project is concerned, I just don’t see how you can justify Allen, at 26 years of age makes sense to keep around when he’s three years younger than the starting QB now and is nowhere near his skillset.

That’s when Paxton Lynch steps in for me, Lynch is still extremely raw but the talent is there. Running a traditional offense in Denver alongside Offensive coordinator Bill Musgrave was an absolute nail in the proverbial Denver career coffin. Lynch needs more of a creative coordinator, creative scheme as NFL Insider Benjamin Allbright put it recently on our podcast. If you are designing plays to play to the strength of Lynch which are read options, some RPO’s and quick reads altogether, you are likely to see production out of Lynch. It’s when Lynch has to think, he has to run 5-to-7 step drop-backs, make multiple reads without mirroring routes and even has to look off a safety or pump fake the streak down the field and throw the out route towards the sideline, that’s when Lynch struggles. He has not developed well in that regard but who’s to blame? Sure, Lynch should get a big portion of the fault here as people have questioned his overall work ethic but it’s not like GM John Elway has a great track record with finding and developing QB’s. Aside from Peyton Manning, the list of QB’s Elway has brought in since 2011 are extremely underwhelming: Adam Weber, Brock Osweiler, Caleb Hanie, Zac Dysert, Bryn Renner, Trevor Siemian, Christian Ponder, Mark Sanchez, Austin Davis, Chad Kelly & now Kevin Hogan.

The Rams have four QB’s in the building with Goff, Mannion, Allen on the active-roster and Luis Perez on the practice squad. The fan-favorite Perez may not make much sense to keep on the practice squad if the Rams can grab Lynch. Perez is already the same age as Lynch and is severely more limited as a QB with a much lower overall ceiling and potential. Lynch, in reality, should be the third QB on the active roster if the Rams want to keep three QB’s. Allen doesn’t make much sense if he’s lost the battle to Mannion and if you are keeping Mannion as a guy that’s familiar with the offense, you can bring in Lynch to develop and ultimately take his spot next year. The Rams made a mistake in not bringing in any QB’s via the draft this season, if Goff goes down it could put the Rams Super Bowl-caliber team in the grave. Last year, the Eagles were able to win it all even after their franchise QB went down and that was because of Nick Foles, the pieces around him and the creative offense of Doug Pederson. Now, the Rams have the chance to sign Lynch, they have pieces and a creative offense in Sean McVay. It’s not as ideal as you would like but when a player like Lynch becomes available in his third year in the league it’s fair to test the waters, kick the tires and try to scrape and claw at any of the potential that might be there for the taking.

If Lynch doesn’t pan out, no problem. The Rams have easily the worst QB room outside of their starter in the league. If they can try and salvage what is there from the 24-year old former first-round pick they might be able to find a long-term backup with the potential to start should Goff’s contract extension talks go south and Lynch makes a major improvement. Paxton Lynch may not be the answer to solve the Rams backup QB woes, but no one on the roster is, Robert Griffin III is not being traded at this time (who the Rams called about trading for) and you do not have a legitimate developmental QB in your facility. Davis Webb, who was recently cut from the New York Giants recently signed with the New York Jets practice squad so now it’s just really all about Lynch. I believe ultimately the Rams should cut Brandon Allen and sign Paxton Lynch to the active roster. It could be a huge project but it could also end up being one that pays off in the end as well.