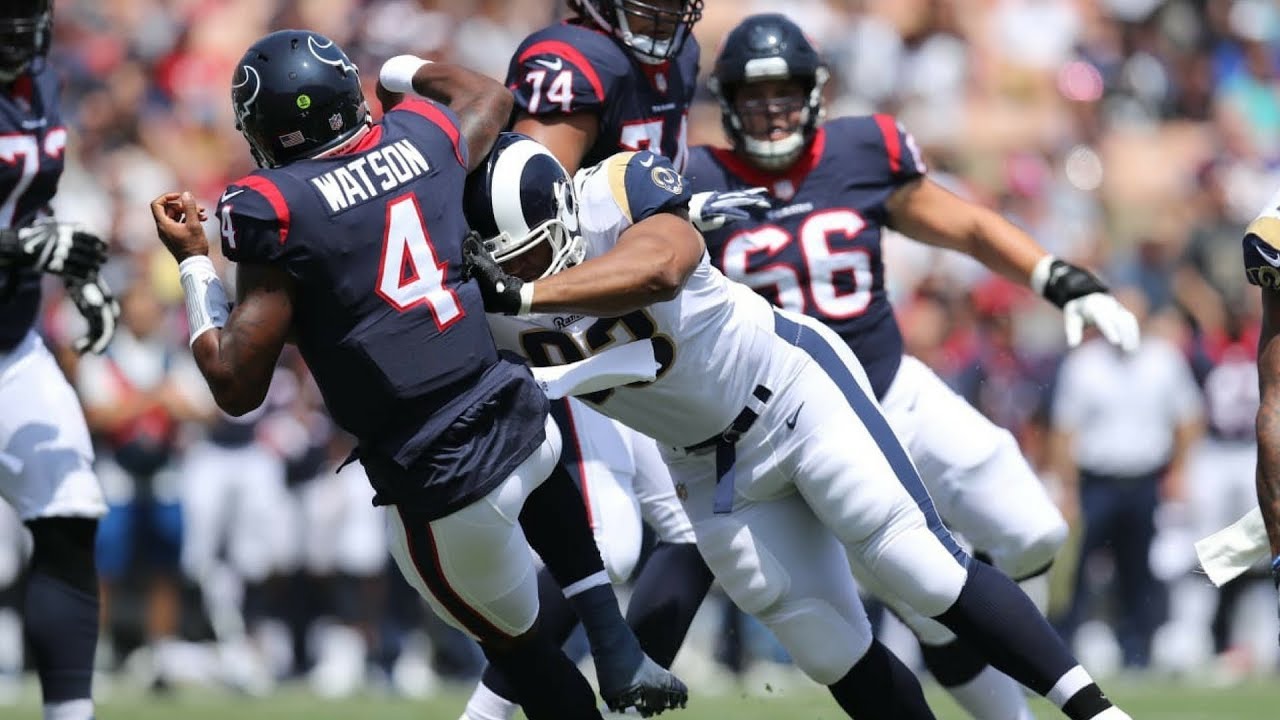 The Rams snuck by the Texans 21-20 on Saturday in a game which the Texans played their starters on both sides of the ball for multiple series while the Rams rested their starters on offense. With any preseason game, the actual product on the field is secondary to whether these players competing for roster spots look like they belong and their storylines. With that said, there are still takeaways from any game, and here’s 5 from yesterday.

The third preseason game is typically a dress rehearsal for teams approaching the regular season. Starters on both sides of the ball typically play at least a quarter, if not the entire first half. McVay, however, opted to rest his entire offensive starting lineup for the 3rd straight preseason game, minus Jamon Brown, who has started in all 3. Many speculated that we would see the starters for a drive or 2, but Head Coach Sean McVay decided against risking injury to his offensive stars. This has been an ongoing debate over the past few years, and no preseason action for the likes of Jared Goff, Todd Gurley, Brandin Cooks, Robert Woods, Cooper Kupp, and the rest of the offensive starters may lead to a slow start at the beginning of the regular season. McVay, the ever-progressive football mind, continues hedging against this theory this preseason, holding out his offense, and I do not expect this to change in next week’s game in New Orleans.

2. Rams Defense Is Hungry And Versatile.

The starting defense did not receive the same treatment as the offense, with the entire projected starting defense, minus Mark Barron (Precautionary, Shoulder) and Aaron Donald (Contract Dispute), playing the first couple series against the Texans starting offense. The defensive starters imposed their will on Deshaun Watson and the Texans, consistently applying pressure on Watson, forcing a 3 and out and a turnover. Cory Littleton, Ramik Wilson (starting for Barron) and John Johnson III each had nice defensive stops, and LaMarcus Joyner picked off a deep ball after Ndamukong Suh laid a huge hit on Watson on what would be the last play of the game for the Rams starting defense. We also got our first look at Dominique Easley this preseason, who is transitioning to an EDGE role this season, and did not look tentative after returning from ACL surgery. The Rams also continued to move around their defensive front, with rookie John Franklin-Myers playing snaps at 5-technique and off the edge, as well as Michael Brockers and Suh lining up in a variety of gaps. Marqui Christian also stepped in with the starters as a Dime linebacker.

3. The Backup Offensive Line Held Their Own.

The Texans defensive front that includes JJ Watt, DJ Reader, and Jadeveon Clowney is enough to intimidate even the best offensive lines in the league. With the Rams resting their offensive starters, the backup O-line got a look at what one of the most talented defensive lines in the NFL looks like up close and personal over the first few drives of the game. The Rams second team offense did not move the ball very well against the Texans first team D, with two 3-and-outs and a turnover in their first 3 possessions, but the bigger takeaway is that the O-line, headlined by Joseph Noteboom and Austin Blythe, more than held their own against the Texans starters in pass protection, allowing just 1 QB pressure over the first 3 series. Throughout the remainder of the game, the Rams backup offensive linemen continued to succeed, opening up running lanes for John Kelly and Nick Holley, and excelled in passing situations, allowing just one sack on the day.

It’s hard to assess backup quarterbacks in the preseason, especially when we as spectators don’t know whether playcalling is purposefully holding them back or if they’re just that limited as passers. Although their box score stats may not jump off the page, Sean Mannion and Brandon Allen appeared more confident and more commanding of the offense than weeks past. Mannion started slow, misfiring on his first 5 passes which included a poor interception. However, Mannion went 11/12 on his next few drives, finishing out the 1st half with 68 yards and a touchdown. After the interception, Mannion appeared to settle in, consistently finding  open receivers in the short areas of the field, and doing enough to move the chains and lead a few sustained scoring drives. The 2nd half belonged to Brandon Allen, who started out the 3rd quarter with a 19 play, 74 yard drive that ate up 12 minutes, capped off by a John Kelly Touchdown run. Allen went 8/9 for 47 yards and had a couple nice scrambles for another 14 yards on the drive. The rest of the 2nd half was pretty conservative, and Allen only threw 4 more passes, but did not appear overwhelmed in crunch time. Between the 2 backups, Rams fans can sleep a bit easier at night seeing the development Mannion and Allen have shown over the preseason, but have they done enough? Whether the Rams decide to keep one, both, or none remains to be seen.

Coming out of college, running backs are always tough to evaluate. Scheme, running style, and traits all muddle together, and guys can slip through the cracks just as easily as others rise to the top. John Kelly clearly slipped through the cracks. Watching Kelly at Tennessee you saw a well-rounded, decisive, downhill runner who never went down on first contact, who I had graded as a 3rd-4th round back. Throughout the preseason, Kelly has demonstrated these same abilities and more en route to being the leagues 2nd leading rusher of the preseason. Kelly has rushed for 197 yards on 46 carries and 3 Touchdowns and appears to be an absolute steal. In this game against the Texans, Kelly rushed for 64 yards, averaging 4.3 YPC, and was a workhorse on 2 of the Rams scoring drives, capping both off with touchdowns, including this 15 yarder.

On this basic inside zone, Kelly sees his hole, explodes downhill, and maintains excellent balance through contact, spinning off a defender and continuing to churn his legs until he is in the endzone. Throughout the game, Kelly also displayed his pass blocking chops as well as the ability to catch the ball out of the backfield. There may not be many touches available in the Rams backfield this season with reigning Offensive Player of the Year Todd Gurley primed for another big campaign, but in my opinion, Kelly has to be the favorite for RB2 and should gain every opportunity to spell Gurley this season.