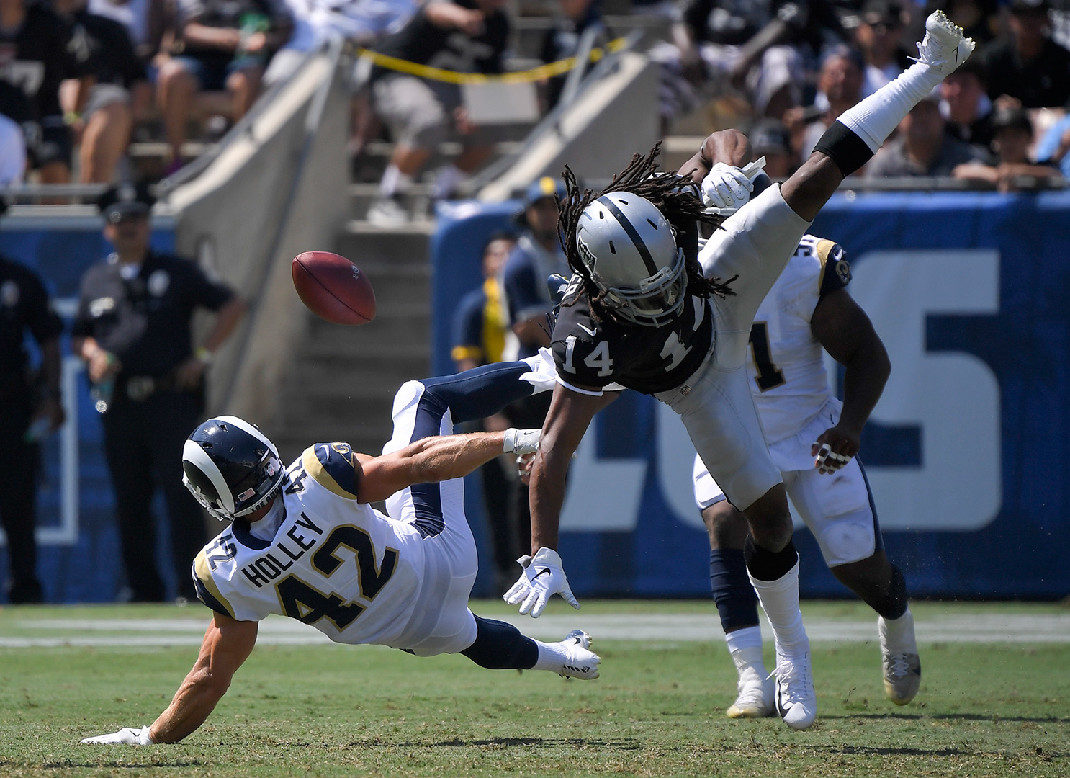 The Rams bounced back this past Saturday after picking up their first win of the 2018 preseason. Another preseason game means another week of stock up, stock down and there is plenty of stock to go around.

Mannion found himself in the “stock goes up no matter what I do” category. With all due respect to Mannion, you cannot play much of a worse game like he did in the preseason opener in Baltimore. Instead, Mannion came out looking a little more confident albeit not blowing the doors off the hinges either but playing well enough to move the ball. His highlight of the game came when he put the ball deep down the field near the right sideline in which became a highlight reel catch for WR KhaDarel Hodge.

John Kelly’s abysmal 3.1 yards per carry do not tell the story of the kind of game he had. This was Kelly’s first crack at really playing against competition that will be on an NFL roster for sure come week one of the season. Kelly displayed his overwhelming confidence, decisiveness and toughness which led him to finding the end zone for the first time in his NFL career. Kelly took advantage of the fact that second-year RB Justin Davis was out battling a hamstring issue. It’s become more and more likely that the Rams found a gem and stole it in the sixth round of the 2018 NFL Draft.

Although KhaDarel Hodge failed to find the end zone for the second consecutive game no one is complaining with his performance. The late year signing of Prairie View A&M WR Hodge has really paid off for the Rams so far in the preseason. Hodge has by far no matter who he has been up against looked the best out of the Rams preseason receivers. Hodge has great size at 6-foot-2 and 205 pounds but what is most impressive about Hodge is his ability to play through the contact. As a receiver you are bound to be held at some point by a trailing defensive back or hit right after you make a catch. Hodge has proven that he does not fear anything, he went up and made a big-time gem of a catch this past week and made another catch where he was once again forced to make a play while the defender was draped all over him. Hodge might have a massive uphill battle in trying to make this roster with the Rams wideouts already set but make no mistake the Rams have something here, Hodge, in two games looks the part and acts the part of an NFL wideout. Pro Football Focus even graded him as the highest offensive Ram player in the game. It will be interesting to see if the Rams try to feed Hodge more and really give him a shot to try and make this team. Could the Rams keep seven receivers? Hodge doesn’t care, he’s trying to be one of the six expected.

Not sure how the third-round pick’s stock keeps on rising but it does. Noteboom has put the Rams and others on notice that he will be ready to adapt to whatever is thrown his way. He’s been a wall as a pass blocker and has helping carve out lanes in the running game. His athleticism is a sight to see and to think how raw Noteboom is and how much better he can be is a joyous vision. With Andrew Whitworth not suiting up with the majority of starts in the next preseason game, Noteboom could potentially have the opportunity of blocking for franchise QB Jared Goff.

Demby just continues to display is power in the trenches and he put it on full display in blowing up his assignment and creating holes for John Kelly. Demby in just two games has really given the Rams everything they could have hoped for to start. It’s early but from everything you see on film you have to imagine sixth-round pick or not Demby is going to be a long-term starter for the Rams.

JFM made his debut this past Saturday and was not a disappointment. Franklin-Myers or rather “The Law Firm” as the broadcasters called him during the game really flashed some serious long-term potential. It’s become very likely that everything that was said in camp and combining that with this preseason showing means the Rams found a diamond in the rough. John Franklin-Myers even showed off the ability to play the OLB position, while he is a slight tweener, his power and quickness push aside the notion that he will have a hard time sticking in the league. Franklin-Myers was a menace in the backfield and put plenty of pressure on the QB which ultimately resulted in a sack and a hit on the quarterback. Once again, it’s early, but the rookie is going to be a big contributor this season whether he starts or not.

Impressive is an understatement in describing Ethan Westbrooks’ growth. Westbrooks just continues to shine and it seems like he gets better every year. It wasn’t long ago he was battling Rams seventh-round pick Michael Sam as a UDFA for one of the last roster spots. Westbrooks has made great use of his opportunities and in preseason this year he has looked like a starter. His ability to get in the backfield as often as he’s shown leaves a lot to be excited about. The Rams defensive line depth looks bigger than ever and a lot of that has to do with Westbrooks.

After quite the rough outing in his first preseason game, Justin Lawler turned his fortunes around and put together an impressive display. The SMU product forced a fumble and was in the face of the QB most of his time spent on the field. Lawler really needed this performance and the rookie seventh-round pick can build off this after getting back on track this week. He’s no guarantee to make the roster but he’s one you would expect has a better chance than others. Lawler finished with an impressive 84.1 grade on Pro Football Focus.

Every year you watch as one player that is expected to really find his stride, take off or just make the roster goes down with an injury and opens up the door for another player. That was Kevin Peterson’s injury in relationship to Dominique Hatfield. The second-year CB had his fair share of flashes and issues in his rookie season. He seemingly came out of nowhere to make the roster and then the Rams at one point had to start him against the high-powered Minnesota Vikings offense due to injuries suffered in the secondary. Hatfield struggled but it appears he’s made significant strides and could make the roster now if the Rams decide to keep six corners. Hatfield had three tackles but he was a pest in coverage and he racked up Pro Football Focus grade of 87.1. Hatfield continues to develop and his play on Saturday was no joke.

Nate Holley is actually living the dream right now of competing for an NFL roster spot with his twin brother Nick on the same team. However, this is a business and Nate isn’t just some cool story. Nate Holley has quietly had two top notch games played in preseason. He’s dropped two interceptions in back to back games but Holley has been a menace in coverage. He racked up four tackles and two pass breakups while also nabbing an elite Pro Football Focus grade of 90.5 and a spot on PFF’s Preseason Week 2 Team of the Week. Holley has some serious competition but if he keeps making plays like he’s making, he will give the coaches a lot to think about when the roster cuts come.

He may not be the flashiest on the field but Afolabi Laguda has really shown up the last two games. He has great range and is one of the more sound tacklers the Rams have out of their rookies. Laguda is facing an uphill battle going against established team contributors from last year like Marqui Christian, Blake Countess and Isaiah Johnson but if Laguda can continue to make the low key tackle that saves the big play and just remain consistent, the fans may not notice but the coaches will. He’s on the bubble but he’s trending up.

Complete 180 of last week when Sean Mannion was on the stock down portion of the article and Brandon Allen was riding high in the stock up portion. Unfortunately, the Rams got nothing out of Allen after he intriguingly made the backup QB job up for grabs with his solid performance last week. Allen struggled this week however and threw a questionable interception in a close game. On top of that, Allen missed WR Steven Mitchell wide open in the back corner of the end zone. Allen’s stock goes back down to a little bit above where it was last week but this performance should definitely give Mannion a longer leash or at least put the Rams in panic mode and in the market for a new backup.

It was a game that Fred Brown could not afford to have. The former Rams practice squad wideout dropped three passes, he only ended up hauling in two of seven targets. The Rams gave him opportunities and Brown did not make the most of them. Brown already has a slim chance of making the 53-man but with performances like this, he will be fighting and clawing his way back on the practice squad.

Once again it was a less than stellar outing for the Rams 2017 sixth-round pick. Smart is being overshadowed by the new guys and is getting stuck with the later reps which is never a good sign. At this point with the production the Rams are getting out of Sebastian Joseph-Day, Smart is officially in trouble. There are two more preseason games but he really needs to make an impact moving forward.

Ryan Davis went from a potential sleeper starter in camp to barely being noticed on defense. Unfortunately Davis was once again held in check and was overshadowed by guys like Marcus Martin who have been on the roster for about two weeks as well.