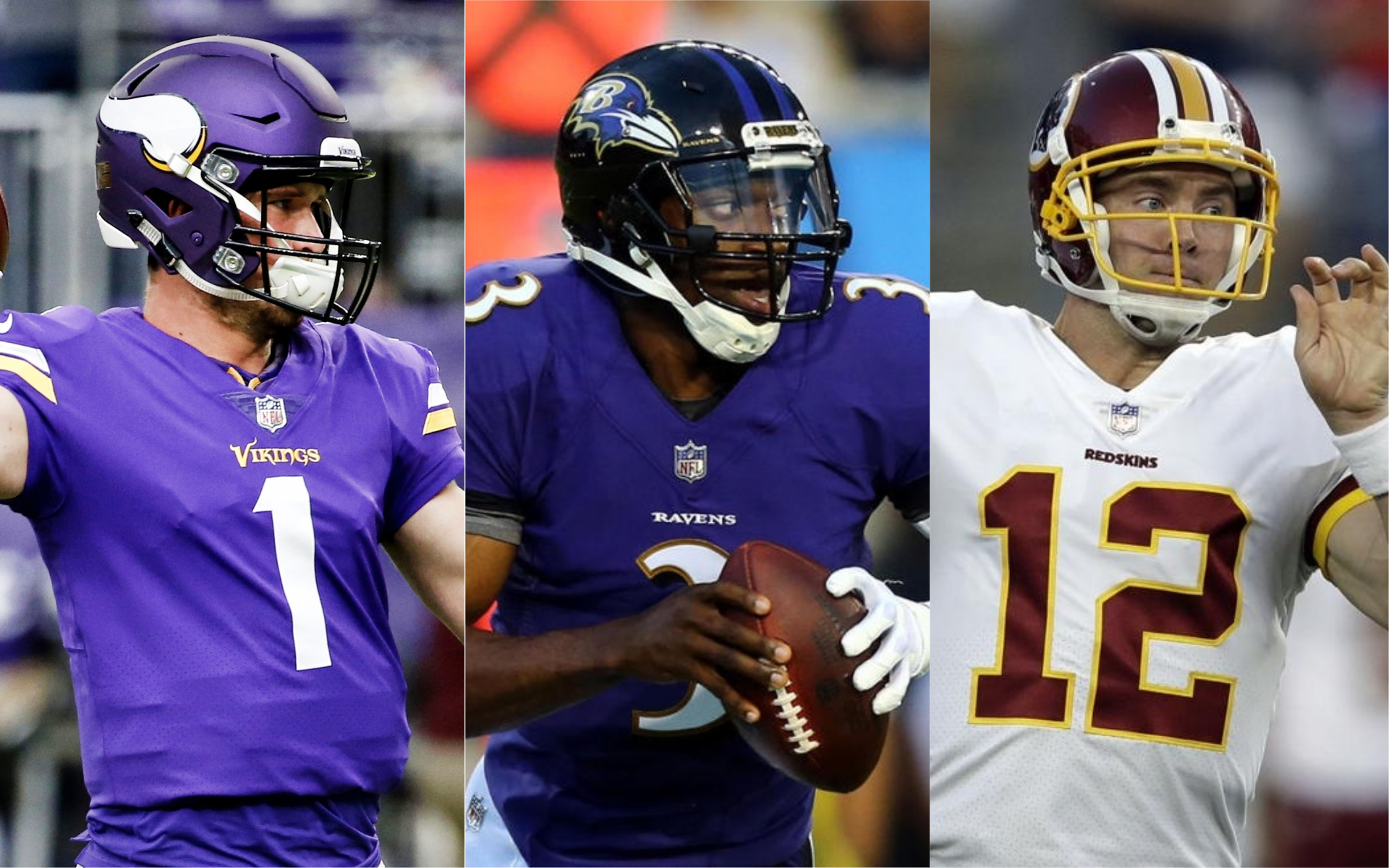 For the first time in a long time, we aren’t spending our days questioning if the Rams have a Quarterback if the Rams should already be looking at who is in the next upcoming NFL draft or whether or not the team has a long-term future with the QB they have. Instead, now, the Rams have fallen into the category of having a franchise QB but a question mark at the backup position. If Jared Goff were to go down due to an injury, the Rams would have to decide between Sean Mannion who was a third-round pick drafted in 2015 and has only logged one start in his career or Brandon Allen who was a sixth-round pick drafted in 2016 and just logged his first game played with the Rams. Not great options on paper and when you watch the tape Mannion leaves you uneasy while Allen could be a solid option but has little to no experience in the NFL. That leaves the Rams with some options heading into 2018 and some serious thinking about what they ultimately want to do behind Goff in a year where the team is eyeing Super Bowl more than ever.

After a team looks at the options in-house and comes to the conclusion they aren’t good enough, they can acquire another player via trade, free agency or waiver claims after the final cut day. The Rams claimed Brandon Allen after the Jacksonville Jaguars cut him last year so they are not opposed to doing such a thing. First, you have to measure which QB will be a fit, which one will be able to step in if need be and clearly be an upgrade over what you have. Then you can also filter out the QBs that have something extra such as familiarity with the current system, mobility and perhaps an affordable contract.

In that first wave of filtering, you would have to look at 31-year old Washington Redskins backup QB Colt McCoy. The veteran signal-caller has been with the Redskins since 2014 and has had plenty of time with current Rams Head coach Sean McVay from his days as the Offensive coordinator in Washington. McCoy just put on a nice showing in preseason against the New England Patriots completing 13/17 passes for 189 yards and two touchdowns. He looked about as crisp and reliable as you could find in a backup QB and that’s no surprise since that is something McCoy has plenty of experience with. The biggest thing would be if the Redskins do or do not want to trade him and the reason this is even a consideration is that the Redskins went out and traded for 25-year old QB Kevin Hogan from the Cleveland Browns this off-season. With the 34-year old Alex Smith brought in via trade, it’s become clear the team wants to develop a young QB like Hogan for the long-term and if they do decide to only keep two QBs on the roster, one would have to imagine McCoy would get the ax. The Rams are likely only to keep two signal-callers on the roster due to the overall talent on this roster. That makes it pretty hard for the Rams to consider moving on from anyone like Mannion or Allen who have been around the team and know the offense. However, if you were going to replace them, trading a late-round pick for McCoy now to reunite him with McVay would be the right move. Goff will turn 24 years old this year so the Rams could look for a seasoned veteran to back him up and give the Rams the best chance to win if he happens to suffer an injury of some kind. McCoy is probably the best option for right now and if you want to move on completely from the in-house options presented.

Option two happens to be another former Sean McVay QB and that is Robert Griffin III. “RG3” is 28 years of age now after he was once the most exciting player in college football and the same player the Rams used to pry away three 1st-round picks from the Redskins organization. Griffin III did not pan out as a franchise QB due to injury but the mobile QB has made an attempt to get back into the NFL. He is now with the Baltimore Ravens and oddly enough, he just not only played against the Rams but took part in a joint practice with them as well. Griffin III even had rumors swirl about going to the Rams if the Ravens failed to keep him on the active roster. The rumors, of course, started to swirl after being seen smiling alongside his former Offensive coordinator Sean McVay. The whole idea of Griffin III becomes an interesting dynamic due to the fact the Ravens have their starting QB Joe Flacco who they are paying too much money to not play and would incur too much of a cap penalty to get rid of and then the team drafted a first-round QB in Lamar Jackson. Just like the Rams, it doesn’t seem like the Ravens would keep three QBs even if one of them is “RG3” and that is where the Rams could capitalize. Griffin III would likely be cut which would make him available, he also would have familiarity with McVay and his offense due to spending his last season in Washington with him. Griffin III has also looked sharp in preseason and at only 28-years old as a team you could bank on the idea he has molded himself into a solid pocket passer with mobility that knows his limits as a runner. The only issue to really even think of with “RG3” is his durability. This is the same QB that has had two grade 3 ACL tears, three grade 1 concussions, an LCL sprain, an ankle dislocation and a shoulder fracture. One wouldn’t question his toughness but the worry is the frequency of injury and the question would be “Has Robert Griffin III learned his lesson and has he fully committed to being a QB first and a runner second?” that is the main question. He, like McCoy, would be an upgrade over what is left on the roster behind Goff.

The last option is rather a different tune. One would expect if the Rams actually moved onto a new QB outside the organization it would be a veteran. However, in this case, the last option would be due to the talent of a future starter caliber player Kyle Sloter. You may not know who he is because he just entered the league via undrafted rookie free agency following the 2017 NFL Draft. Sloter was one of the bright young preseason stars last year and had Denver Broncos fans screaming for their team to retain him and even start him. The Broncos decided to keep him on the 53-man roster originally until former Bronco QB Brock Osweiler became an available free agent. Sloter was released and signed onto the Minnesota Vikings practice squad. During last season even despite the fact, the Vikings had Sam Bradford, Teddy Bridgewater and Case Keenum, Sloter was kept on the 53-man roster. They clearly like him as a developmental QB with a combination of both of the previously mentioned QB options for the Rams. Sloter is reliable with the ball in his hands, throws with accuracy, stands confident at 6-foot-5 in the pocket and shows his former WR athleticism with his mobility in and out of the pocket. Sloter finished last night’s preseason game against his former team 6/9 for 69 yards passing and a touchdown. The 24-year old QB didn’t stop there as he ran for 19 yards on two carries including an impressive rushing touchdown. So why would the Vikings up-and-coming young gun even be available for the Rams? The Vikings traded for his former teammate on Denver, Trevor Siemian. Siemian jumped Sloter on the depth chart as soon as the trade was made. Is Siemian better at this point in his career? Perhaps. Does he have the experience of starting in NFL games in case Minnesota’s 30-million-dollar QB gets hurt? Definitely. That is why the Vikings, who did keep Sloter on the roster with three other QBs last season could still get rid of him depending on the price. Things may have definitely changed when the team acquired Kirk Cousins in free agency. If the Rams were to offer a 5th-to-7th round pick for Sloter they could likely acquire his talents. Sloter would give the Rams the opportunity to develop someone long-term in case Goff was not re-signed long-term. With Sloter’s mobility, awareness, accuracy and overall feel for the game, he would fit in right away with McVay’s offense. It’s not the most likely of the three options but as far as the most exciting and the most beneficial one long-term, a trade for Minnesota’s young signal-caller would check all of the boxes.

It’s unclear if Rams backup QB Brandon Allen won over any coaches on that staff after an okay performance in tough conditions but Mannion certainly didn’t. Luis Perez, the UDFA out of Texas A&M-Commerce did not even see a snap in preseason game one. That was more about the Rams anxiousness to see what they have in Allen as the backup than it was about Perez not being good enough to get on the field. In fairness, no one knows what Mannion would be under a first-team offense but after a performance like the one he had on Thursday in Baltimore, it’s safe to be cautious if such a thing were to ever happen. It may seem unfair but players that have shown more than Mannion has in a lesser amount of time and in lesser repetitions have been kicked to the curb much faster. The Rams may have a Super Bowl-caliber roster and an all-star coaching staff but they have the worst backup QB situation in the league and that will need to be fixed sooner than later.