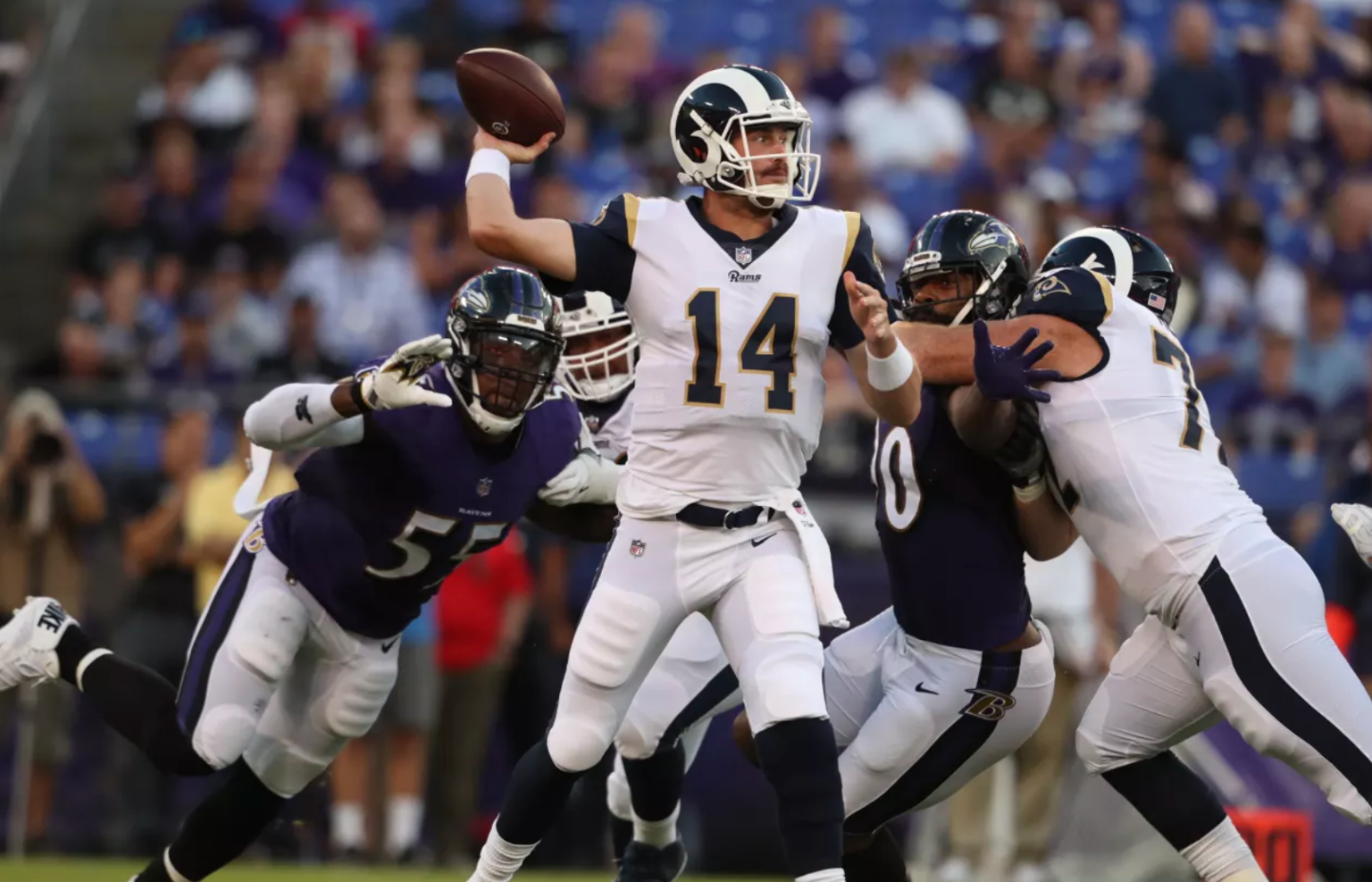 The Los Angeles Rams were dismantled in their preseason road opener against their training camp partner Baltimore Ravens.

It was quite the disaster from the start. Although the Rams second-team offense and defense started the game (besides Jamon Brown and Samson Ebukam) against the Ravens first-team. Joe Flacco, who sat out last week’s Hall of Fame game marched the Ravens down the field on five pass completions for 71 yards. The Rams defense had put on some pressure but they were unable to bring down Flacco as the Ravens set the tone from the first drive of the game.

As for the next drive, it was the same pretty much all the way around with backup QB Sean Mannion starting and the Rams offense practically running in place. Mannion at one point of this game had a 1.7 passer rating. The highlight of the Rams offense in the first half was Justin Davis who was averaging almost six yards per carry. Davis was the only bright spot in the first half.

Ravens rookie QB Lamar Jackson stole the show. The rookie QB had himself hung out to dry in multiple occurrences but the enigmatic Jackson was able to use his athleticism and get out of trouble which ultimately led to him gashing the Rams. There was solid pressure from veteran DL Ethan Westbrooks who had two sacks and two tackles for a loss, but Jackson continued to battle through the pressure while holding a 23-0 lead into the half.

Brandon Allen came out for the Rams in the second half and while he didn’t set the world on fire, he didn’t have to. Mannion struggled so badly that Allen really just sufficed just off the fact he was moving the ball. On the other side Robert Griffin III came in as well and threw a touchdown. The story of the second half was Tennessee rookie RB John Kelly who had himself a half. He displayed the ability to run, receive and block as an all-around back. Kelly broke off multiple runs and showed excellent vision and patience that will make him a godsend when it comes to giving Todd Gurley a break.

Other players that showed out were rookies ILB Tegray Scales, ILB Micah Kiser, WR KhaDarel Hodge who caught a touchdown, return man JoJo Natson and Joseph Noteboom among others.

Overall, the Rams received some flashes of brilliance and a terrifying reality that they truly do not have a capable backup behind Jared Goff. That is why UDFA QB Luis Perez did not see the field. The Rams were seriously trying to get a good look at Brandon Allen and see if he can be the backup. The Ravens had a dominant performance but played most of their starters early on. With the Rams resting most of their starters there is very little to worry about aside from the QB depth.

Rams @ Ravens Preseason Week One: Stock Up, Stock Down