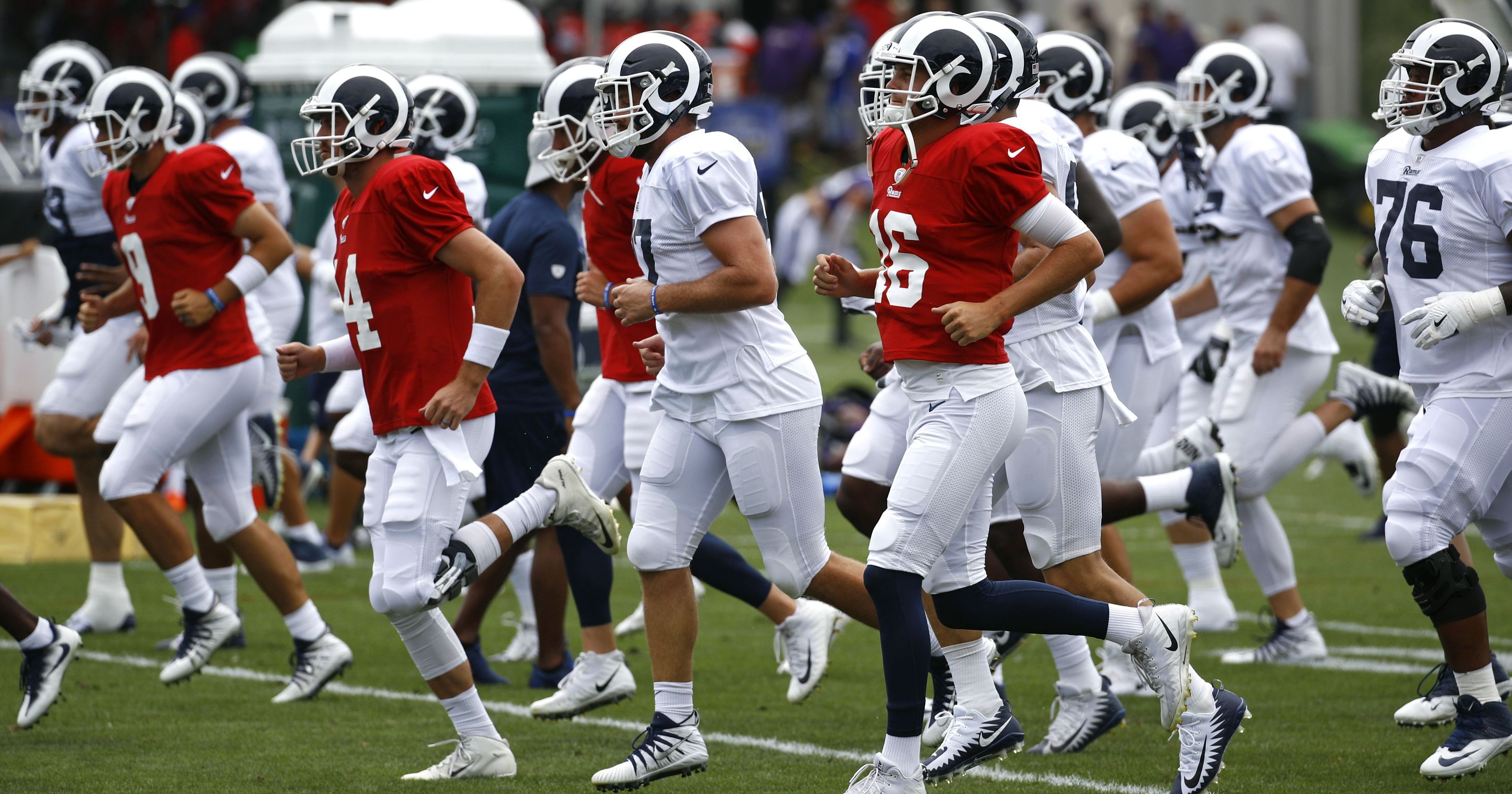 We have Rams football right around the corner and so it’s time to make a prediction before any action gets underway about who will be making the 53-man roster. 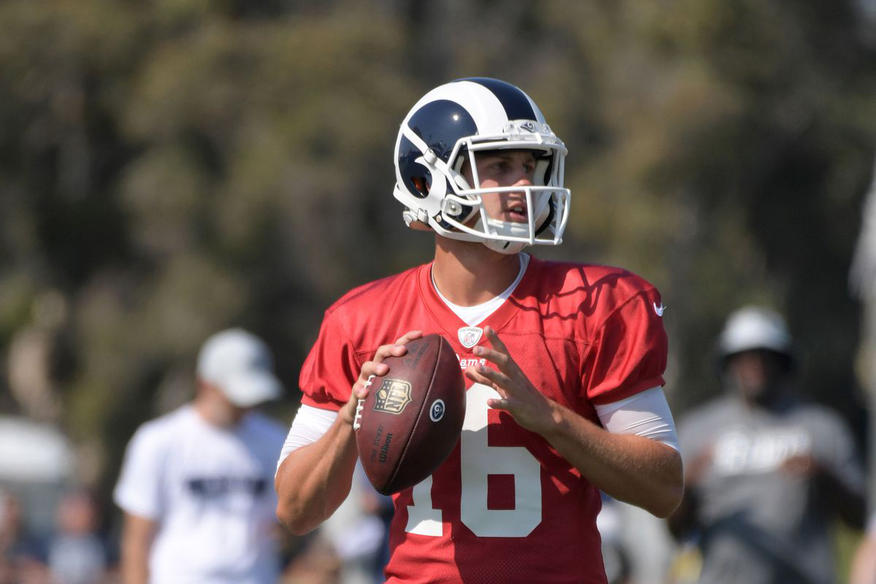 Jared Goff is obviously going to be the starter but the real question is who is going to be the backup? Sean Mannion, I would wager has the best chance since he’s highest on the depth chart, started a game last year and the coaching staff seems to really like him. The issue with the Rams is that they simply haven’t seen the production they need to see out of Brandon Allen and Luis Perez to justify taking up an extremely valuable roster spot.

Perez is likely a practice squad candidate while Allen is on the Rams speed dial in case an injury transpires. I just don’t see the Rams, who are now a serious Super Bowl contender, keeping three QB’s. Allen will need an amazing preseason to steal this from Mannion. 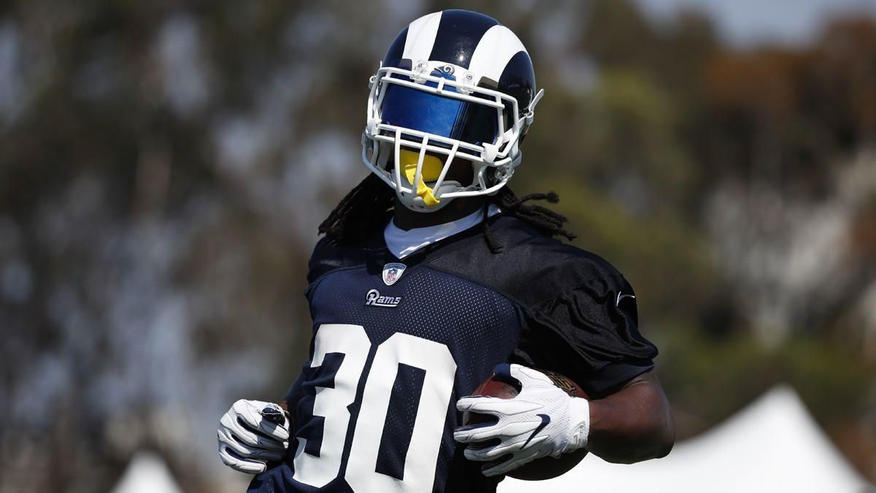 Once again, no competition with the starter here who was just signed to a big-time contract extension.  The roster battle is the backup job behind Gurley. Malcolm Brown has been around the longest of the competition and he’s been extremely solid, but Justin Davis is someone the Rams like a lot and they showed that by keeping Davis stashed on the roster all season long. Lastly, the sixth-round pick John Kelly is really turning heads in camp and should be considered a lock at this point. Nick Holley is an intriguing bunch of camp legs but I don’t see him knocking a Justin Davis or John Kelly off the roster. 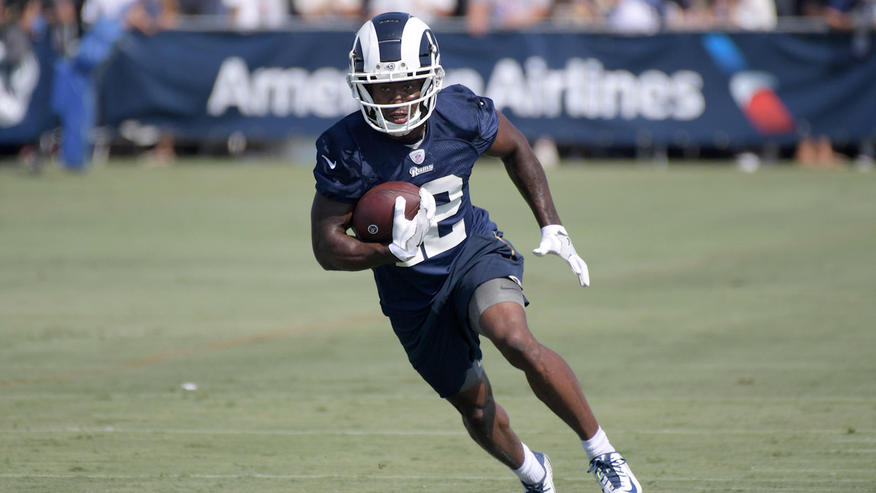 Aside from the big three that is settled between the combination of Brandin Cooks, Robert Woods and Cooper Kupp. The Rams have 2-3 receiver spots left to fill. I would say they are already filled between two 2016 picks in Mike Thomas, Pharoh Cooper and a fourth-round pick from last year’s draft, Josh Reynolds. UDFA Steven Mitchell is the one to really watch out for as someone that could force the Rams hand to cut someone like Thomas. At the end of the day, the six projected should be the six selected and Mitchell will likely end up on the practice squad. 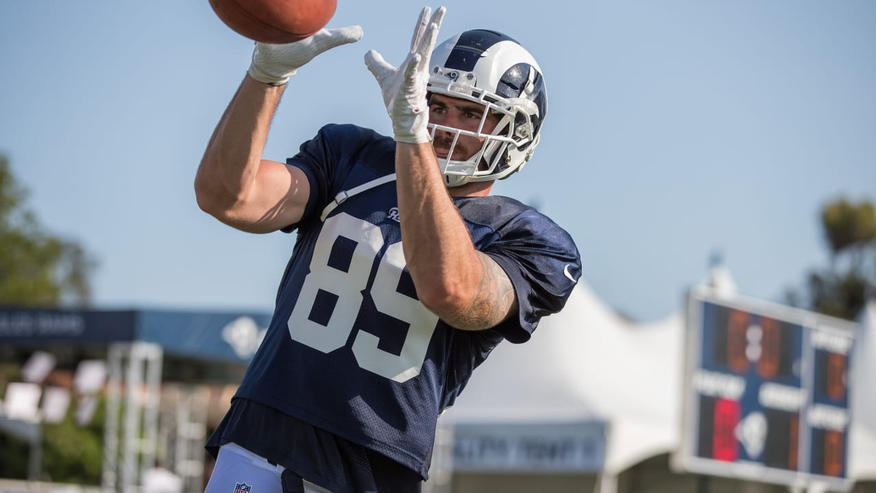 This is the one position group on offense that finds the Rams just waiting for someone to emerge as the guy. Tyler Higbee has been the starter but the team does have a second-round investment in Gerald Everett and a very interesting talent in Temarrick Hemingway. Will the Rams keep four TE’s? They may have to with Everett’s shoulder banged up but regardless, Johnny Mundt is worthy of a roster spot and I believe the Rams will agree. 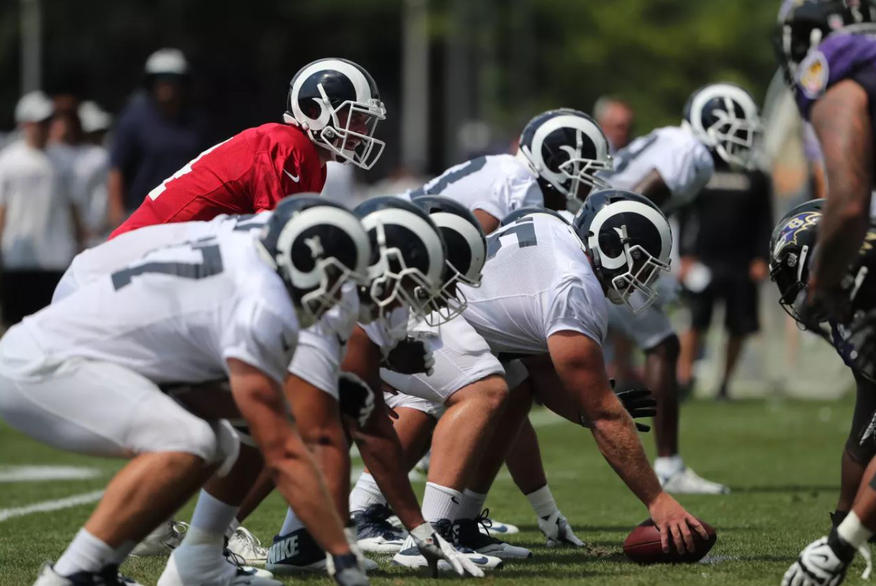 This is going to be interesting because the Rams have more talent in areas of strength but good enough talent where they might have to stash some players on the roster so they don’t lose them. On the offensive line, the Rams have what you would call a mulligan because Jamon Brown is on the suspension list and the Rams will not have to put him on the 53-man roster yet because of it. You have to expect the Rams will keep the other four starters on the line and all of the three draft picks. The real question once again is the back end of this positional depth chart. Who is going to be kept in addition to those groups and with that being said you have to include Austin Blythe who was claimed last year off of waivers and played very well when needed.

Due to the perks of having Aaron Kromer as your offensive line coach and the fact he cross-trains his linemen, the Rams will be able to go with all of the aforementioned and not have to settle on keeping a lesser talent because he plays the tackle position. 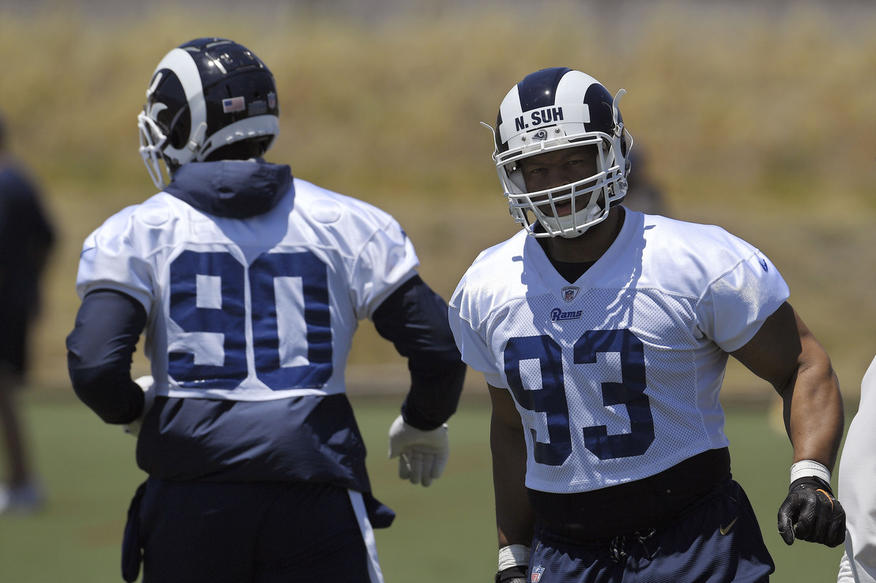 Okay, so, the offense was easy but now we get into the nitty-gritty and that is the defense. The Rams arguably have more question marks on defense and that is exactly why it will be the hardest to decide who to keep on the roster. The obvious ones are Aaron Donald (as long as he signs), Ndamukong Suh, Michael Brockers and honestly, at this point, I would say Ethan Westbrooks and rookie John Franklin-Myers. After that, it’s a toss-up, do the Rams keep six or more defensive linemen?

The tough choices are always draft picks that made your roster the year prior which would include Tanzel Smart and even the undrafted rookie from last year Omarius Bryant. Once again, the Rams have a mulligan because Dominique Easley is still working on his return from his ACL tear. With Morgan Fox on injured reserve and Easley on the PUP list, it appears possible that a player like McKay Murphy has a chance of making this roster. Overall, I expect the Rams to keep six only and go with Sebastian Joseph-Day. He may not be the best of the bunch but he offers the ability to play the nose tackle position. This is going to be won in preseason games and any of these guys could make this team. 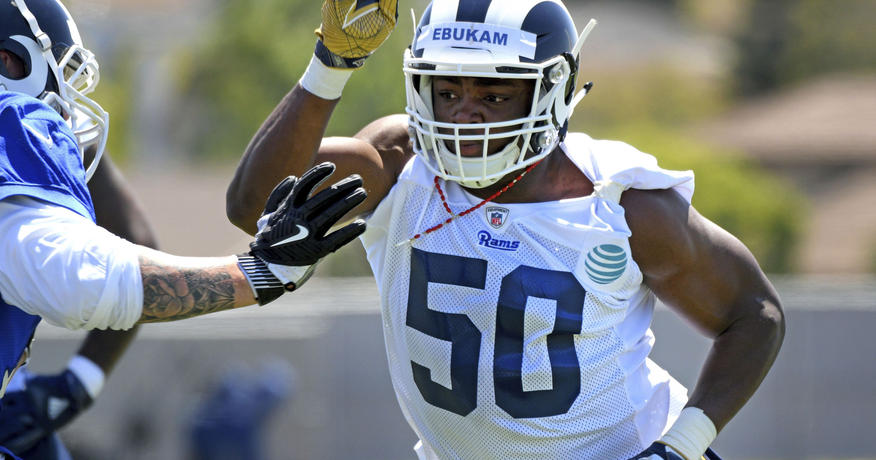 The Rams did trade away Robert Quinn in the off-season and made their outside linebacker unit more unproved and young. It wasn’t just Quinn that left the team but also Connor Barwin. Well, the Rams are rumored to sign Junior Galette so I threw him right in this outside linebacker projection. All of the sudden, despite the lack of proven talent, the Rams have a dilemma and that is like the other positions: who is going to remain on this roster? Samson Ebukam will headline the position group but Matt Longacre, who is also supposed to start next to him has been battling injuries.

Rookies Ogbonnia Okoronkwo and Justin Lawler are expected to make an impact this season in some facet. Okoronkwo could see himself staying on the PUP list a little longer due to a foot injury, whereas Lawler has been taking first-team snaps and has a chance to really be a key rotational guy in his rookie year. The rest have arguments to remain, you talk about Trevon Young who has come back from serious injury and has a lot intriguing talent at his disposal, Ejuan Price who was drafted last year and has remained around the team, Brian Womac, the interesting UDFA, Marcus Martin, the all-time collegiate sack leader and of course Ryan Davis, the guy that came out of literally nowhere to making noise in camp and running with the one’s. I would not be shocked if the Rams kept Davis but the signing of Galette will jeopardize his spot on the roster which looked very promising at one point.

As far as next year goes, the Rams will be able to carry Carlos Thompson and Garrett Sickels over onto next season’s roster via injured reserve. 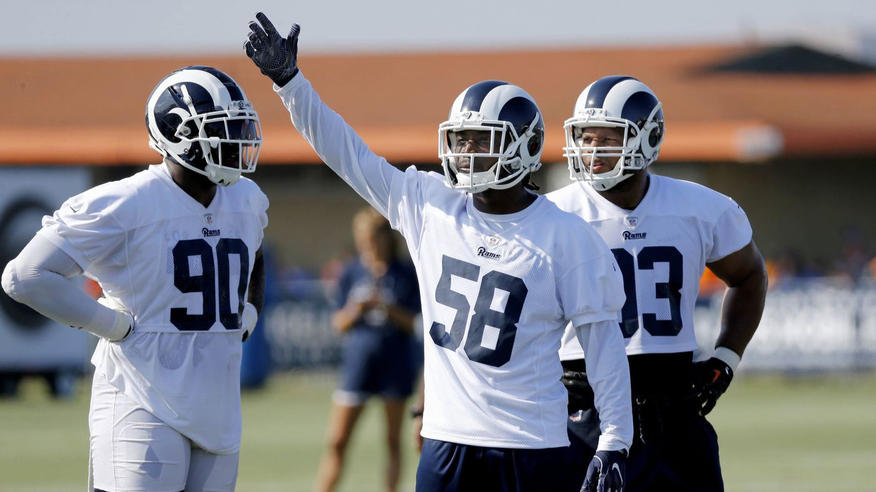 This unit is going to shock the NFL media. No one is giving the Rams the benefit of the doubt at linebacker despite the fact that Wade Phillips is the defensive coordinator. I firmly believe the Rams traded away Alec Ogletree because they realized what they had in Cory Littleton who is going to be starting next to one of the more efficient linebackers in the league Mark Barron. The team signed Ramik Wilson in the off-season to a one-year deal so while he isn’t untouchable he still will likely have a role on the roster. Bryce Hager is still on the team from the Fisher era and has carved out a special role on special teams but this training camp he has really flashed and I don’t know if I’m ready to say the Rams part with him.

After the veterans, you have a whole lot of potential and unproven rookie talent. Tegray Scales is someone I believe will turn heads in preseason. Scales has been stuck behind draft picks Micah Kiser and Travin Howard but I believe overall he is the better linebacker of the three. Kiser appears to be the high IQ thumping old-school style linebacker the Rams will definitely want to keep around and Travin Howard adds a ton of versatility and athleticism. Scales is going to force the Rams hand and they are going to end up letting go of Howard. Howard will likely be thrown on the practice squad and potentially “called-up” next year when Wilson’s contract is up. 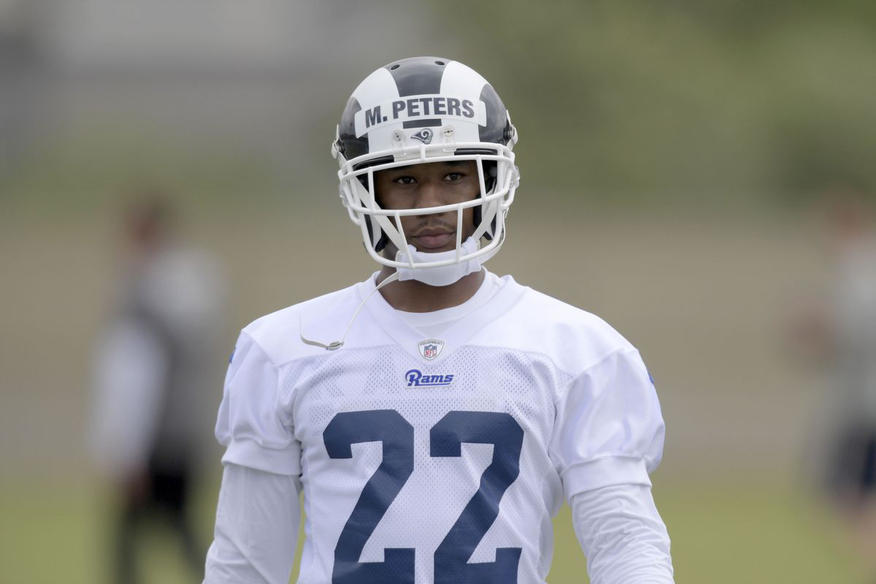 The Rams have too much talent at cornerback to the point of no return. The team let go of last season’s starter Kayvon Webster and will likely have to make a tough decision again. Aqib Talib and Marcus Peters rival Jalen Ramsey and A.J. Bouye as a duo of corners that is one of the best in football. It also helps the Rams have one of the best nickel corners in the league in the form of Nickell Robey-Coleman. When you factor all that in and then add the fact that the team acquired Sam Shields who has elite level talent when healthy and Troy Hill who played at an elite level in his first playoff game last year, the Rams depth is off the charts.

Unfortunately, that’s five already which leaves Kevin Peterson who is really developing into a stout cornerback and building off a strong finish of last season, Dominique Hatfield who made the roster last year and has had an impressive camp. I just can’t see the Rams cutting Peterson, Mikell and Hatfield are candidates for the practice squad and Peterson will likely be traded because he’s simply too good to just cut. The Rams could cut someone expected to make the roster just to keep Peterson especially with Shields on only a one-year deal. 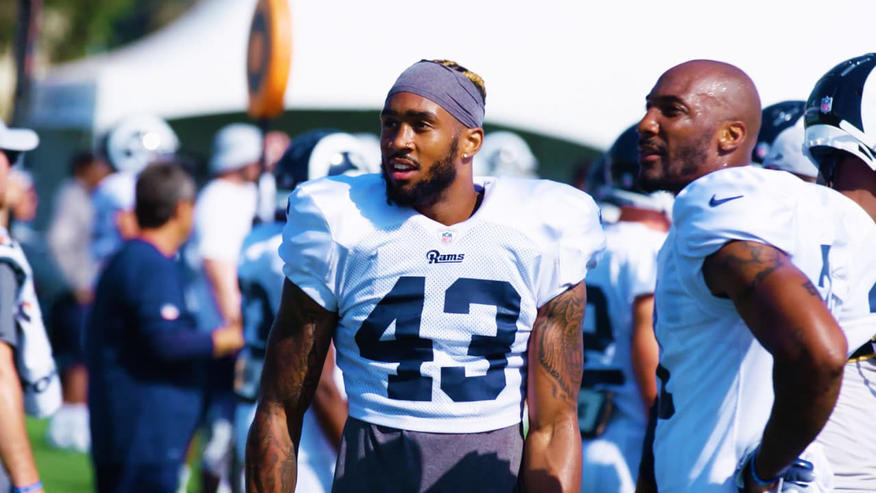 The Rams really don’t have much space left and can only keep four safeties with what they have done so far in this projection. I would imagine Steven Parker and Ramon Richards would give the team something to think about but this team is just too talented to keep five or six safeties. Instead, the Rams opt to go with the duo of Marqui Christian and Blake Countess that have stuck on this roster like glue since they arrived. The starters are non-negotiable, John Johnson III is a budding star and LaMarcus Joyner is one of the best in the league already after one season at safety. As far as next year, Joyner’s future seems about as uncertain as it gets and that could be a huge opportunity for Christian to assume a starting role. 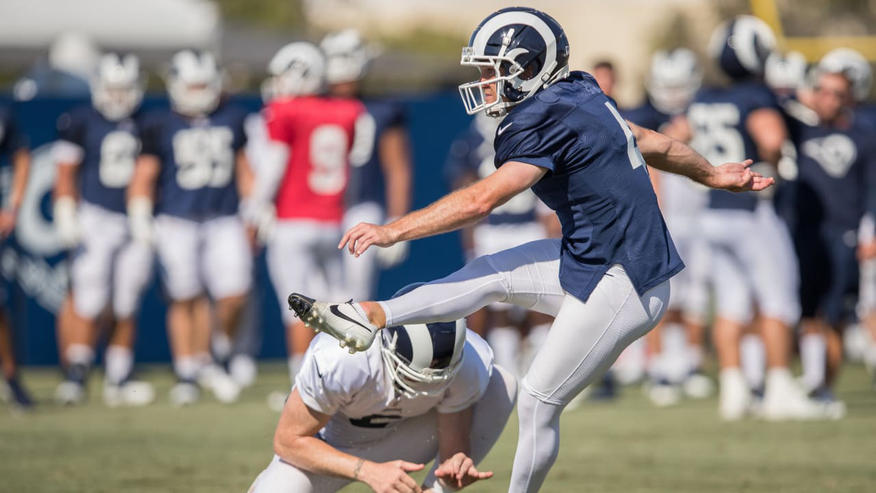 Arguably the best kicker, punter and long snapper trio in the NFL resides in Los Angeles. There isn’t much to say after that. Sam Ficken has looked good in camp but it won’t be enough to dethrone Legatron and he knows this. The Rams job he received in Zuerlein’s absence is what will keep him trucking in the NFL. He will certainly be on speed dial in case GZ has another set back with his back but I would expect Ficken to find a jump pretty quickly when the Rams cut him and end up like former camp leg Michael Palardy who has found a role in the NFL.