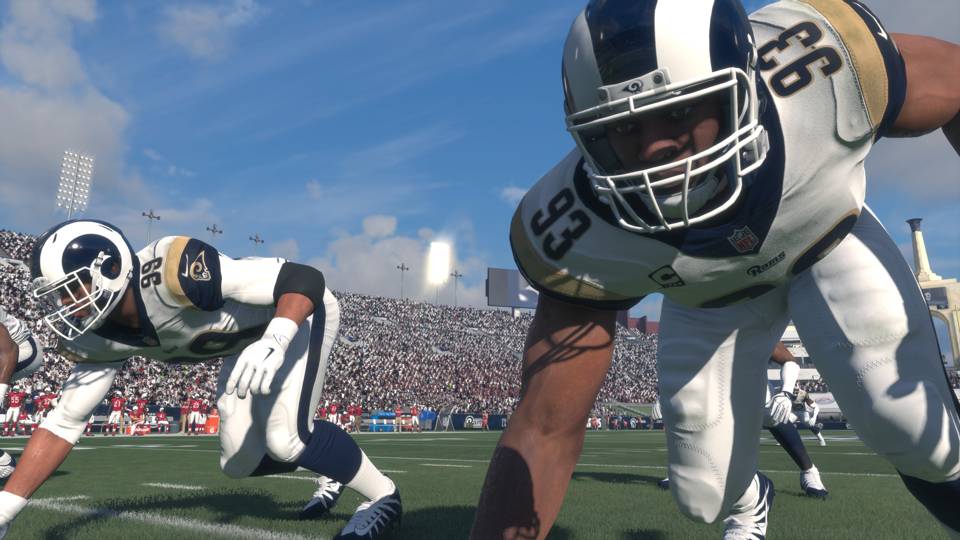 It’s that time of year again. Madden NFL 19 will hit stores on the 10th of August but if you have EA Access for the XBOX One as part as the exclusivity plan with the NFL, you can play the game right now. I did just that and decided to simulate the Rams season all the way through. Here’s what happened…

The Los Angeles Rams went into Oakland on a Monday Night season opener and beat the Raiders 27-10. The Rams started off the season 1-0 and continued on into the home opener against Arizona winning a competitive contest 31-21. Week three came along and all of the sudden the Battle for Los Angeles was underway, of course, the Rams took care of the Chargers 24-7. Thursday night football at the Coliseum brought a close one but the Rams advanced to 4-0 after a win over the Minnesota Vikings. The Rams would follow up with three straight wins on the road: 31-17 @ Seattle, 45-15 @ Denver and 17-14 @ San Francisco. Los Angeles would go 7-0 and continue their dominance with a 31-21 win of the Packers as well. However, at 8-0 the Saints hosted the Rams and were able to hand them the first loss on the season in a close 35-28 game. The Rams would go right back into their winning ways scoring 40+ points in blowout wins over Seattle and Kansas City as they stormed into the bye at 10-1.

After the bye week, the Rams would win two more on the road against Detroit 28-21 and Chicago 13-10. Next up, however, the defending Super Bowl champions would steal one on Sunday night by a score of 27-24. The Rams would finish up the regular season with two division wins against the Cardinals on the road 17-14 and finishing out the season against the 49ers with a 28-7 victory over them. That means after all the off-season acquisitions (in Madden) they lived up to the hype in the regular season as they would secure the top overall seed in the NFC at a 14-2 record heading into the playoffs. After a first-round bye, the Giants would come into the Coliseum and steal a divisional round playoff win against the best team in football 26-22. The Rams season would once again come to an end on another first game playoff loss in a year they looked to be the odds-on favorite.

I was a little dumbfounded by half of the things that happened. Madden does have a mind of its own and so things like Ogbo breaking out with such a minuscule rating they gave him was a little shocking. Jared Goff had a season that many are expecting in this simulation. He was efficient as can be and spread the ball out. It is worth mentioning how the Rams did rely on John Kelly for about 5-10 carries a game and he actually had some touchdowns as well. The weirdest thing was the fact that players like Pharoh Cooper and Josh Reynolds barely saw the field on offense.

Goff was rated the third best QB in the league right ahead of Tom Brady and right below Carson Wentz and Aaron Rodgers. Todd Gurley was once again the best RB in the league adding even more backup to that contract. It was a wacky simulation that saw guys like Danny Amendola break out for a 1,000-yard season and 12 touchdowns. Aaron Donald finished just one and a half sacks behind Jadeveon Clowney in this simulation while Talib finished with two fewer interceptions than the league leader Trumaine Johnson. Even though Brandin Cooks didn’t have the season I would have expected his 942 yards on 69 receptions bested the former Ram wideout Sammy Watkins who finished with 612 yards on 62 catches.

Notable injuries included Matt Longacre who was eerily out for the year after week one with a back injury which allowed Okoronkwo to take over, Jamon Brown who tore his ACL after week three and was replaced by Jamil Demby and lastly Micah Kiser who broke his leg in preseason and was lost for the year.

There is a lot to love with this simulation and a lot to dislike. Hopefully, the Rams have a similar offensive production and end up hoisting a Lombardi trophy at the end of the season. I think Rams fans will take a lesser regular season over a dominant one and a first-round playoff exit.