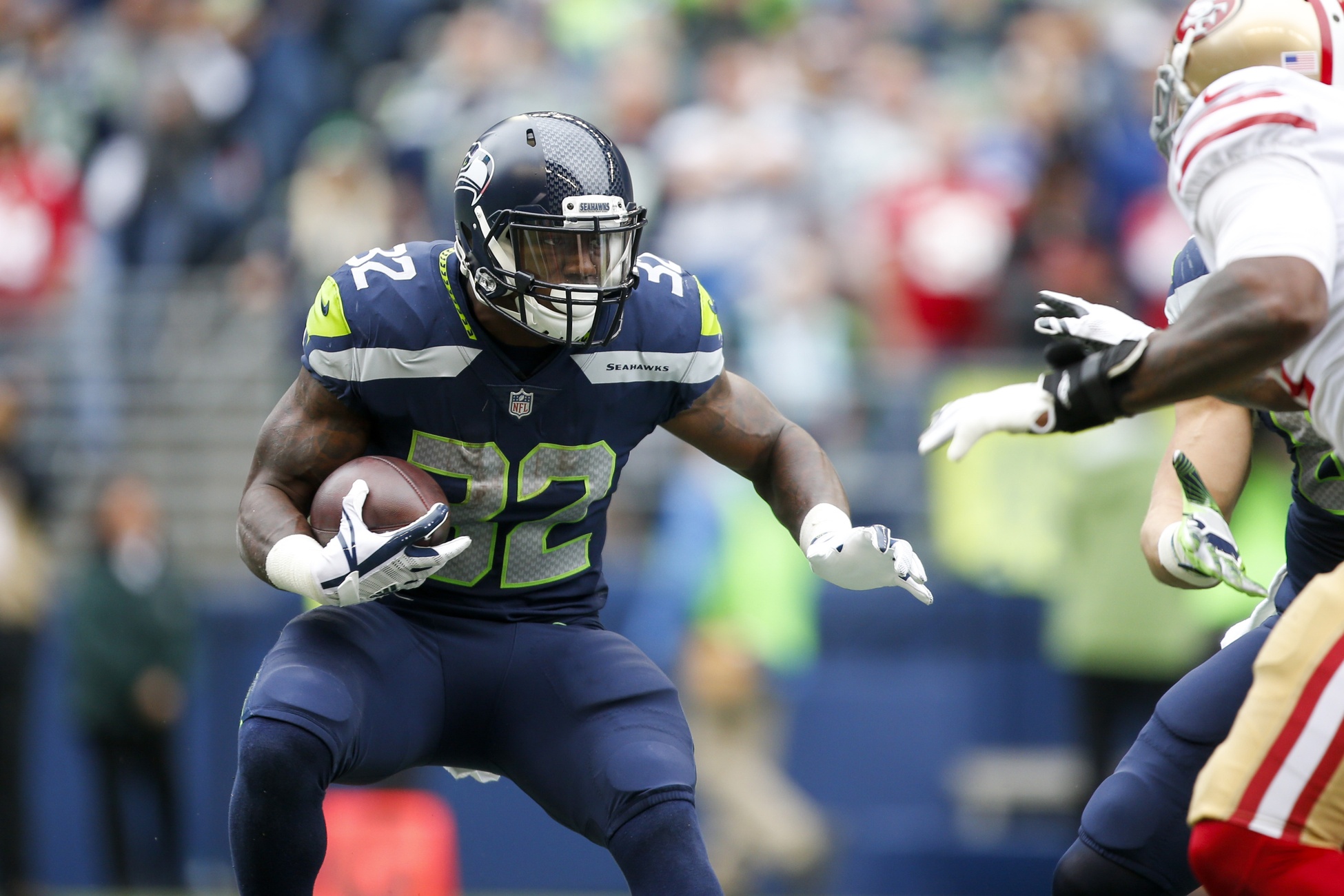 We have been following Rams camp consistently but the rest of the NFC West needs to be spied on. In this piece we go “behind enemy lines” and talk about the San Francisco 49ers, Seattle Seahawks and Arizona Cardinals training camp buzz. 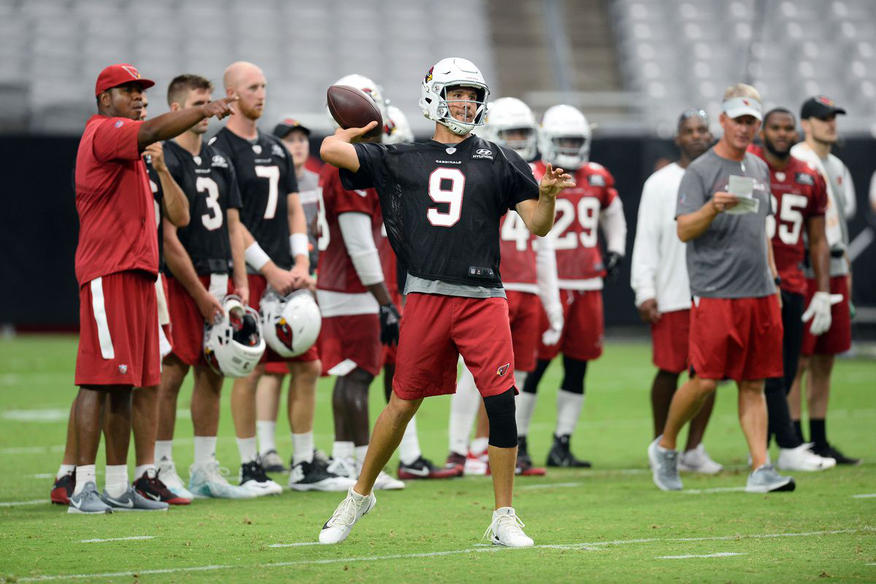 The Cardinals made some serious power moves this off-season. One of which was acquiring QB Sam Bradford via free agency. Bradford has since been named the starter by first-year Head coach Steve Wilks. The Cardinals also have 1st-round pick Josh Rosen and free agent signing Mike Glennon at their disposal as well. Arizona gets one of the best RB’s in football back in David Johnson and just recently made a steal of a move picking up young stud safety Tre Boston. The team placed EDGE Markus Golden, TE Jermaine Gresham and CB Christian Campbell on the PUP (Physically Unable to Perform) list. Campbell, the rookie from Penn State has since been activated from the PUP list.

– WR Brice Butler is winning the starting gig at the moment next to Larry Fitzgerald. As far as reps go the depth chart would show Fitzgerald, Butler, J.J. Nelson, Chad Williams and Christian Kirk in that order.

– Newly-acquired CB Jamar Taylor has taken over as the starting CB alongside Patrick Peterson. Brandon Williams has practically been phased out in camp which leads Bene Benwikere and Lou Young to be the beneficiaries in what appears to be a souring on the part of the Cardinals organization on the former starter.

Seattle saw the fall of Rome firsthand when the Los Angeles Rams ripped the NFC Championship out of their hands with authority last season. Now, the Seahawks seem to be trying to pull the parachute instead of trying to figure a way back up onto the private jet they they continue to free fall from. The Seahawks had a questionable draft which included drafting a 1st round RB that other teams had as a day 2 or 3 pick and trading up to draft a punter high. They added intriguing talents in Shaquem Griffin and Jamarco Jones but aside from that they just lost more than they gained. It doesn’t help when All-Pro players like Kam Chancellor retire, Cliff Avril retires, Richard Sherman is released, Earl Thomas wants to be traded and the team loses Sheldon Richardson in free agency.

– WR David Moore is a camp standout so far. Seattle lost Paul Richardson to the Redskins in free agency and added veteran WR Brandon Marshall but they will certainly need consistency and perhaps Moore is the start of something exciting.

– S Bradley McDougald is the favorite to start next to Earl Thomas. McDougald has been lining up as the team’s primary strong safety and will have a big hole to fill in replacing Chancellor. Another safety that has really emerged in camp is second-year safety Tedric Thompson who has made a couple of stellar plays in the secondary. Seattle also just signed Lorenzo Jerome and they have Mo Alexander as well.

– RB Chris Carson broke out last year and was the talk of camp, then he broke out during the regular season until a leg fracture ended his campaign early. Now, he’s back and it’s deja vu. Carson is by multiple reports “tearing up” training camp. C.J. Prosise appears to be the next back in line and then 1st-round pick Rashaad Penny, Mike Davis and J.D. McKissic round out the RB room. If Carson turns into an elite RB like he could do, it really makes you wonder what the point of drafting Penny was for.

– LB Shaquem Griffin has made some nice splash plays including and interception of Russell Wilson. He’s definitely someone to watch for as someone to blow up in this defense.

– DE Jacob Martin, the rookie out of Temple has really showed his versatility and will give the Seahawks options to move him around as a pass rusher and run stopper.

The 49ers are coming off an outstanding end to the season. They caught fire after switching to franchise QB Jimmy Garoppolo. But here’s the thing. The Niners still finished as a top 10 picking team in the draft. While they improved and have a great coaching staff, they aren’t there yet. Playoff potential? Yes, but Super Bowl? Pump the breaks. Here’s what has been said about the 49ers this camp season.

– CB Ahkello Witherspoon is getting destroyed. The second-year CB is just having a hard time and while these drills are often advantageous for the WR’s, it still doesn’t mean you should be getting destroyed by seemingly every one of them on the roster. Victor Bolden Jr.? Torched him. Richie James? Burned him. Dante Pettis? Dominated him. He’s having a rough time, it’s to be expected, he’s still raw but not a good look.

– Speaking of Pettis, it appears he has sealed the deal as the return man going forward and has looked great fighting through contact off the line of scrimmage. Pretty much everything that had me calling him the top receiver is being displayed in camp. His flexibility and acceleration make it nearly impossible for cornerbacks to get the best of him.

– CB Richard Sherman is still obviously recovering. He’s lost speed, he’s not as young he used to be so that was obvious. Sherman was seen being blown away by WR Marquise Goodwin but then again most CB’s are.

– RB Joe Williams in his second season has coaches and fans turning heads. The rest of the RB’s look good as well which includes the addition of Jerrick McKinnon and Matt Breida but Williams has the potential to be really good and we pretty much already know how good McKinnon is.

– QB Jimmy Garoppolo struggled in his first padded practice with the deep ball. He still excels in the short and intermediate game which should leave 49ers fans with hardly anything to worry about. Garoppolo is in for a nice year if everything stays intact.

– LB Brock Coyle is standing out in camp. An unusual breakout in camp award would likely go to Coyle. Someone that many Niners fans would rather replace with newly-drafted Fred Warner. That’s fine, Warner is very talented and I saw that first hand at the Senior Bowl but Coyle is not about to go down without a fight.

– RB Jerrick McKinnon we talked about earlier. McKinnon has essentially become Garoppolo’s security blanket and could be in for a monster dual-threat season depending on how much he’s leaned on. The 49ers love what he’s done to the passing game.

– The Niners pass rush is struggling. Due to the fact Garoppolo has such a quick release, it makes it look even worse for the defense. The 49ers pass rushers are simply not flashing at all and look to be getting dominated by the offensive front.

So that’s what has been said about camp so far for these teams. We will continue to monitor our NFC West foes some more down the line but for all Los Angeles Rams training camp coverage be sure to stay tuned to Downtown Rams.