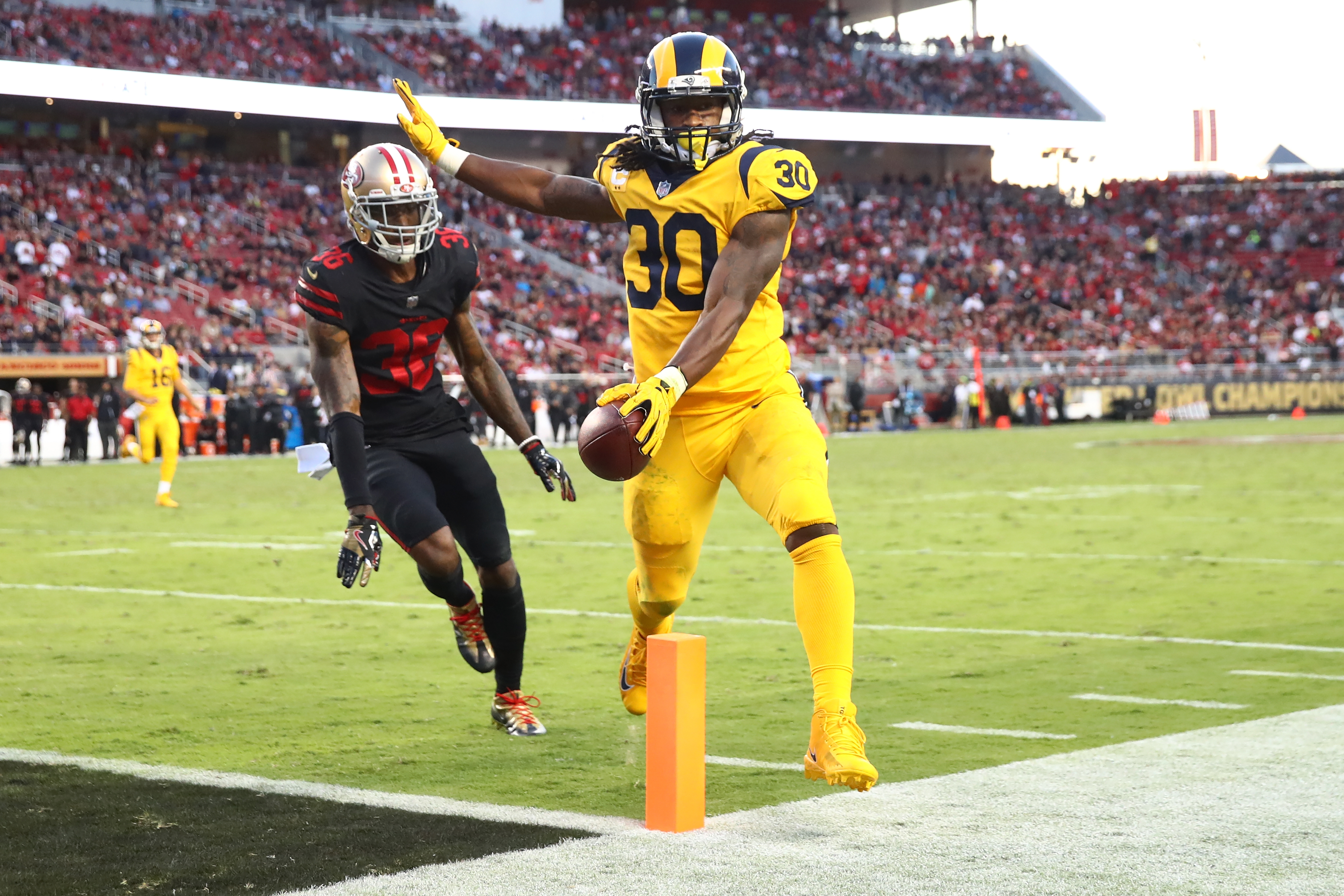 The Rams rush into training camp with one of the best running back situations in the league.  When Todd Gurley is your starting running back, it is hard to not have a positive outlook.  But what makes the Rams’ situation even better is the depth of the running back core and the Rams’ head coach. Sean McVay is an offensive savant who utilizes his running backs in many ways. Under McVay, the Rams got the more out of Todd Gurley and the running back core than most teams.  Gurley not only rushed for over 1300 yards and 13 rushing touchdowns but caught almost 70 passes for almost 800 yards and 6 more touchdowns. This type of production is unmatched around the league and as the offense continues to grows the Rams will be able to continue to compete for a title.  This dynamic play from the running back position is an essential asset to the team. The Rams situation is also positive due to the stable of running backs behind him. These running backs will get a lot of snaps throughout the pre season games and will get an opportunity to show that they can also be dynamic.

Why There is Still a Training Camp Battle:

The second running back on the depth chart plays a vital role for the Rams offense, even with Todd Gurley. The battle for the next man up is also important as Rams running backs have had a history of being signed by other teams to be given a chance to compete for more reps and starting jobs. Coach McVay knows he is lucky to have Gurley and wants to ensure that Gurley is able to contribute to the Rams for years to comes. This means being able to trust the depth players behind Gurley so that when Gurley comes out teams are still concerned about the running back. 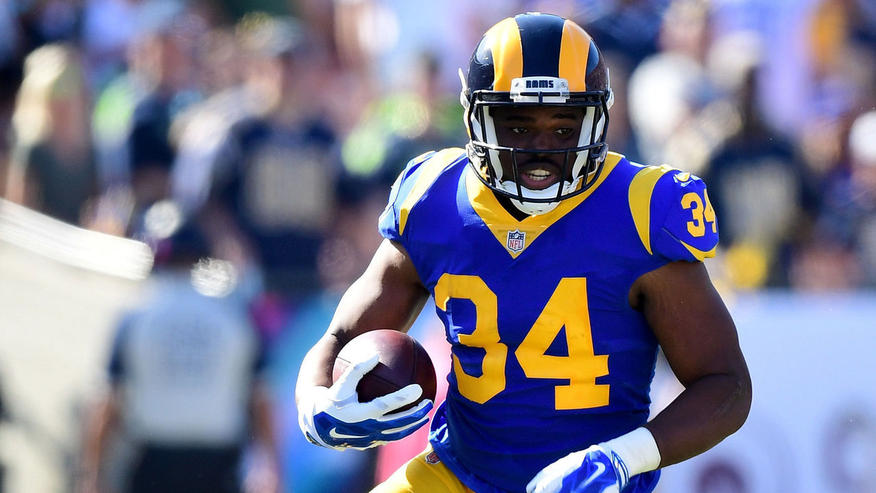 Malcolm Brown: Brown, originally an UDFA signing by the team, is the most experienced backup on the Rams roster and the front runner to secure the primary backup duties. This void was vacated last offseason when Benny Cunningham signed with Chicago. Last season Brown shared the role with Tavon Austin, who was traded to Dallas earlier in the offseason. Austin out-rushed Brown by a small amount but Brown did get the second most carries behind Gurley. Brown is going to need to show the team that he can do it all, as Gurley is a major part of the passing offense as well. Brown only caught 9 balls last season, but did so for 53 yards, more than Tavon Austin. This battle for the primary backup role isn’t going to be won easily or given. Brown will likely earn a roster spot even if he is beat out as the primary backup. 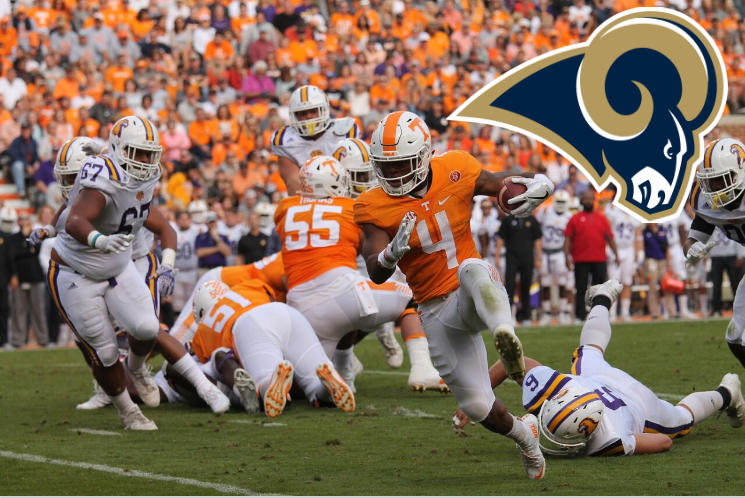 John Kelly: John Kelly, who is eager to show the league what he is made of, was drafted by the Rams in the 6th round of this off-season’s draft. Kelly received high praise from scouts and draft experts but fell slightly due to off-the-field issues. Pundits were disappointed to see Kelly drafted by a team with a strong running back group, as many thought he could fight for a significant role on the proper offense. But Kelly isn’t discouraged by having Todd Gurley in front of him and is a system fit to play behind him. Kelly is a serious contender to win the backup job and defeat veterans Malcolm Brown and Justin Davis. Kelly is a 3-down back who is a reliable pass rusher and someone who can catch the ball out of the backfield. Under Coach McVay Kelly’s receiving skills should continue to improve. Kelly, like Brown, is very likely to make to the roster. Kelly has a future in the NFL and he wants to prove to people that his future is now. 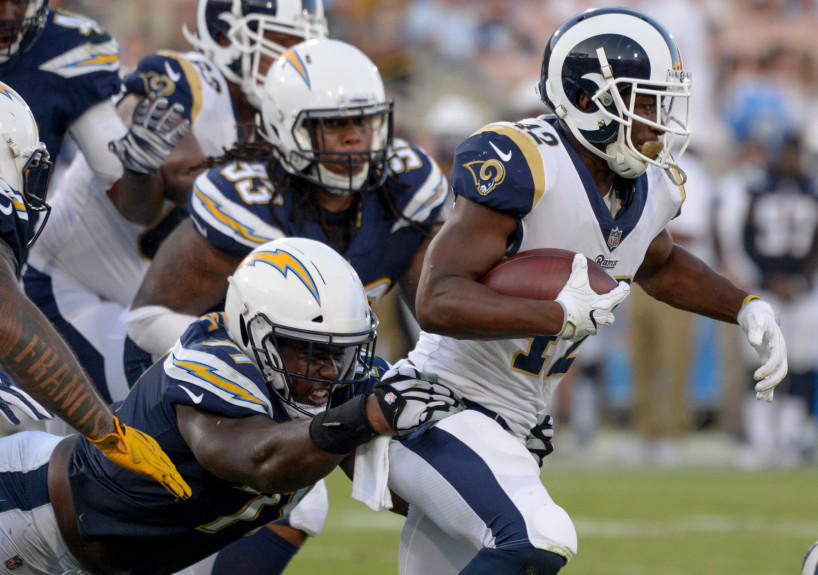 Justin Davis: Davis is a player who deserves a roster spot in the league, but earning one in Los Angeles is easier said than done. Justin Davis was brought in as an UDFA and appeared in 4 games last season. However, Davis only rushed the ball once. He will get an opportunity to prove himself during training camp, but he has an uphill battle to make the roster. It is unlikely the Rams will roster 4 running backs, especially with Todd Gurley on the roster. If Davis wants to give them an excuse to keep him he will have to grind on special teams and look good when running the ball. Davis does have some running ability and can catch out of the backfield but isn’t a great blocker and isn’t super physical. If Coach McVay is doubtful Davis will make the team there is a chance Davis may be released earlier in training camp in order to get a chance to make another roster. 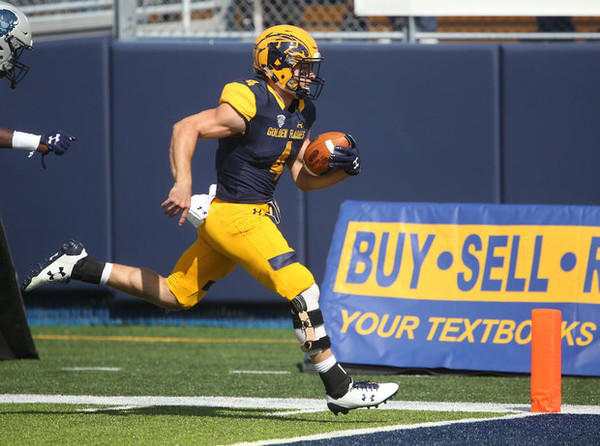 Nick Holley: Nick Holley was signed as an UDFA and has been given an opportunity to be at training camp. Nick is not really a candidate for this backup role battle, but he still may have a future with the team. At Kent State Nick played quarterback, wide receiver, and running back. This versatility is an interesting twist and something Sean McVay may be able to get the most out of. Holley will have to prove that he can play special teams if he wants a chance to make this roster this year or next year. Nick is unlikely to make the 53 man roster but has a serious chance to make the practice squad. Nick will also be an interesting story to follow as his brother Nate was also signed by the Rams as a UDFA and was invited to training camp as a defensive back.