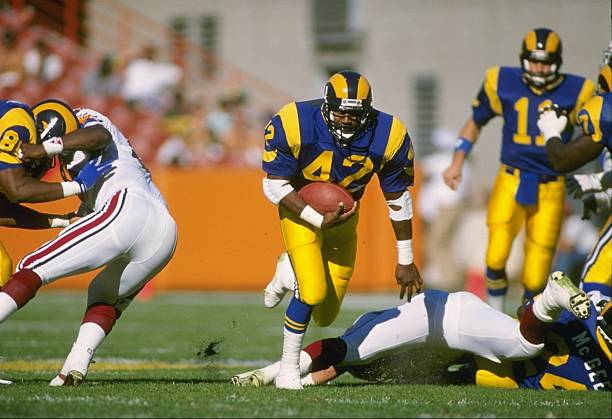 Greg Bell was a former Notre Dame running back that went in the first round of the 1984 NFL Draft. The Buffalo Bills drafted him 26th-overall and he produced immediately. His rookie year, Bell finished with over 1,000 yards rushing and seven touchdowns. It was apparent Buffalo had made a solid choice by selecting Bell in the draft. The next season Bell finished under the 1,000-yard rushing mark but finished with eight touchdowns. His third year would be his last full year with the awful Buffalo Bills who finished a combined 8-40 during that three-year span. Bell only started six games and didn’t amass anywhere near the rookie season he had.

The Rams didn’t really get much out of the trade aside from Flipper Anderson, Fred Strickland and of course Greg Bell. Bell made the Rams look like early winners in the trade starting in 1988. He had over 1,300 total yards from scrimmage and 18 total touchdowns. Dickerson still led the league in rushing, but it was the fact the Rams had a young replacement that had 18 total touchdowns and on top of that the team was going to have more picks incoming. Bell and the Rams had a nice season going 10-6 and falling short in the first-round of the playoffs in a 10-7 loss to the Minnesota Vikings. In 1989, the Rams and Bell picked up right where they left off as the 27-year old RB accumulated over 1,200 total yards and 15 touchdowns. It became apparent that it was going to be time to pay the 27-year old after the team went 11-5. This was the year that the Rams had knocked off both the Eagles and Giants in the playoffs but were ultimately blown out in a game to go to the Super Bowl by Montana and the 49ers.

As for Bell and the Rams for that matter, it was the end of the quick winning era. Bell was one of those dream scenarios when you get a player via trade to replace a star and they do a great job in doing so. Dickerson could never be replaced but Bell was among the league leaders in rushing. Unfortunately, Bell and management didn’t see eye-to-eye. He was loose-lipped in his thoughts and because of it, the Rams felt they weren’t going to sign him to a long-term deal like Bell wanted. The Rams, in turn, decided to trade him to the Oakland Raiders for an undisclosed draft pick. It was a shame the Rams had such a talented back but felt like he didn’t fit the culture of the team. After that last season with Bell, the Rams would go on to have a disastrous stretch until 1999 when they won the Super Bowl.

Bell retired right after his first year in Oakland. He had fallen off a cliff just like the Rams after his departure and others departure. Bell had 33 total touchdowns in two seasons as the Rams starting RB. Dickerson finished with just two more touchdowns in his five seasons with the Colts. The trade simply had no winner or loser and perhaps the winner was the Buffalo Bills who received Bennett. He spent nine seasons with the Bills, racked up 52.5 sacks, 751 tackles, 22 forced fumbles, 19 fumble recoveries and six interceptions. The Bills linebacker was a five-time Pro Bowler and an All-Pro. Bell was great in a limited amount of time for the Rams but the longevity wasn’t there and is why Bennett and Bills won the mega Eric Dickerson trade.