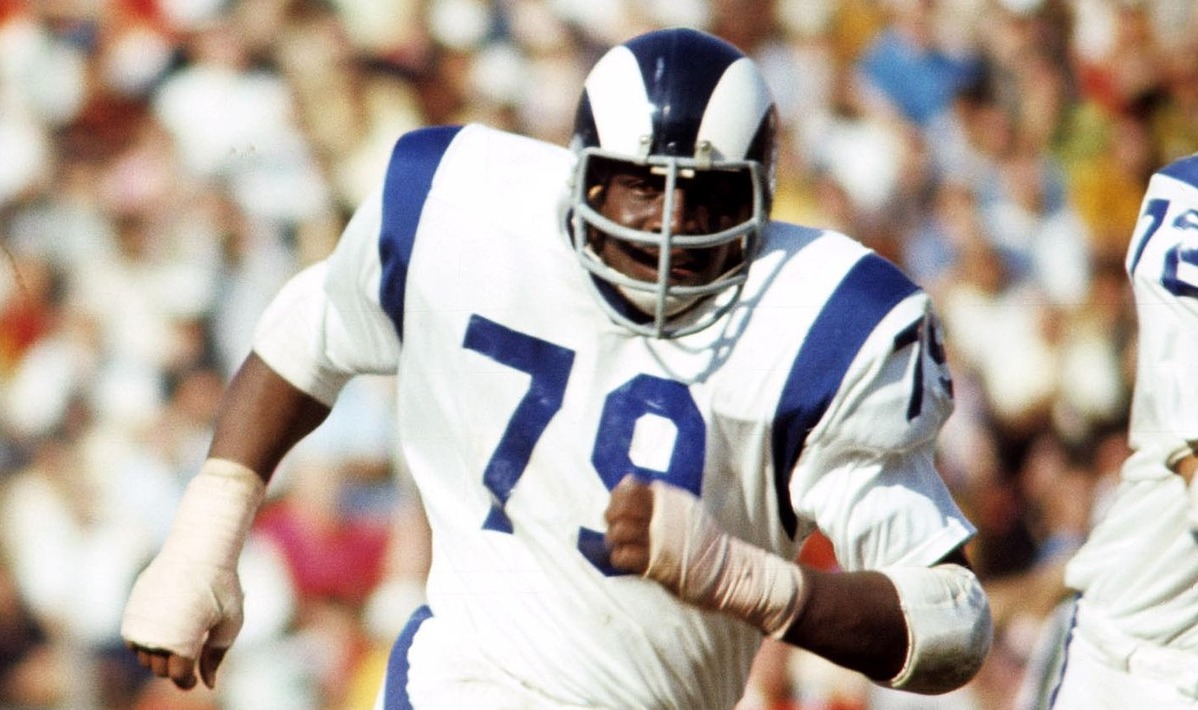 Leandor McCoy (Coy) Bacon was undrafted out of Jackson State and spent his rookie year on the Dallas Cowboys practice squad (taxi squad). Of course, that wasn’t before he was named All-Star of the Continental Football League for the Charleston Rockets in 1966. In 1968, the Cowboys traded Bacon to the Los Angeles Rams for a fifth-round pick. The Rams traded for him halfway through the season and used him as depth behind the Fearsome Foursome squad that dominated the NFL. Bacon ended up playing in seven games that season for the Rams in a season that saw them finish 10-3-1 and still not make the playoffs due to a close loss on the last game of the year to Don Shula’s Baltimore Colts.

The next year when starter Roger Brown went down with an injury, Bacon stepped right in for him at defensive tackle and made his presence known. Bacon finished the season with 13 starts on the year. This season, the Rams had improved and finished the year at 11-3 under George Allen and went to the playoffs. Unfortunately, the Rams fell short in the divisional game against the Minnesota Vikings 23-20 and found themselves eliminated from the playoffs in a season that could have seen them going to the championship.

In 1970, member of the Fearsome Foursome Lamar Lundy had retired and now Coy Bacon was an official starter. Bacon had officially moved to the defensive end spot in which he was about to showcase his incredible overlooked ability. There was a reason the Rams traded away a fifth-round pick for an undrafted rookie free agent. In this season, Bacon racked up an unofficial total of 20 sacks and returned a fumble for a touchdown, he started all 14 games but unfortunately, the 9-4-1 Rams missed the playoffs.

The 29-year old Bacon continued his dominance in 1971 but was finally recognized for it after notching his first honors to the All-Pro Second-team. Bacon had an unofficial total of 21 sacks in his second season starting as a defensive end. The franchise named Bacon the defensive player of the year for their team. Unfortunately, it was a season that ended in yet another miss of the postseason after the Rams finished 8-5-1. When the league expanded to 26 teams it really took a toll on the Rams playoff chances as they were good but unless they won the division they weren’t good enough.

Once again Bacon was named the Rams defensive player of the year but unfortunately, it once again was a season that ended in defeat. This time though, the Rams had fallen from grace after finishing third in the NFC West division under second-year Head coach Tommy Prothro. It was another Second-team All-Pro honor for Bacon but that was all she wrote as far as Bacon’s story with the Rams goes. The franchise decided to trade their star defensive end and their 24-year old up-and-coming running back Bob Thomas in 1973 to the San Diego Chargers for quarterback John Hadl. This marked the point of the organization in which the Rams had given up on the once elite QB Roman Gabriel and had sold the farm to grab a new QB in what looked like a panic-ridden decision.

The next year things worked out for the Rams under new Head coach Chuck Knox, John Hadl and star RB Lawrence McCutcheon. The team finished 12-2 and found Bacon’s replacement in Fred Dryer. Unfortunately for Bacon, the Chargers were a polar opposite type of team that finished 2-11-1 on the year. The only real highlight came on an 80-yard interception return from Bacon. He played another solid season while only starting in nine games. Bacon reunited with Head coach Prothro the next season in which displayed an improved season after going 5-9. There looked like something was being building until the collapse the next season falling right back down to the bottom of the league at 2-12. The 24-year old QB Dan Fouts was miserable as well as the rest of the team. Once again, Bacon was traded after a disappointing year and this time he was off to join the Cincinnati Bengals in a trade for Pro-Bowl WR Charlie Joyner.

At the age of 34, Bacon was clearly not done. The trade to the Bengals brought in one of the most dominant seasons in league history. The NFL did not start recording sacks until 1982 but the Bengals started to long before that and to this day the Bengals accounted unofficially that Bacon had sacked the QB 26 times which would be the record in a single-season to this day. However, things get tricky as they did not count half sacks as a half but more as an entire sack. So, it is said that Bacon finished with 21.5 which was still incredible and was among the elite and still is today. He received another Second-team All-Pro honor as well as an invitation to his second Pro Bowl. He started every game for a team that finished 10-4 and just missed the playoffs again. The next season the Bengals went 8-6 and while it was another Pro Bowl season for Bacon, it was also another empty postseason as well.

Right before the 1978 season, Bacon would be traded again to the Washington Redskins for a First-round pick along with eight-time Pro Bowl teammate Lemar Parrish. The league had already expanded to 28 teams but it had also made the bold move to switch to 16 game seasons. The Redskins received the pass rusher they needed in Bacon but it wasn’t enough in year one of Bacon’s Redskins career as the team went 8-8. The next season the playoff kryptonite known as Bacon and the Redskins missed the postseason again at 10-6. The following season the 38-year old Bacon notched a third straight double-digit sack season (unofficially) but the Redskins struggled and finished 6-10. Bacon in his fourth and final season with not only the Redskins but the NFL as a whole started three games but suffered an injury that would sideline him the rest of the season. The Redskins went 8-8 in their first season coached by Joe Gibbs and the once elite pass rusher was released from the team the next season.

Bacon just loved the game and refused to let it go, so in 1983 at the age of 40, he joined the Washington Federals in the USFL. The team went 3-15 and Bacon started all but two games that season with 62 tackles and seven sacks in what was to be his final year playing football. He retired and still remains as one of the most overlooked defensive players of all time. After his career was over Bacon became a motivational speaker following his encounter with a drug-related gunshot wound. He spent years working at the Ohio River Valley Juvenile Correctional Facility. In 2008, Bacon passed away at the age of 66.

Although he played for the Fearsome Foursome era Rams, Bacon was mainly forced to play around a lot less talent for the next nine years. He was the focal point of the defense and teams would make sure to double team him. Still, even with the double teams, Bacon was ferocious. He played 180 NFL games in 14 seasons, accumulated three Pro Bowl honors, two touchdowns, 15 fumble recoveries and an unofficial total of 130 sacks. He may never find himself in the Hall of Fame just like his teammate from the Rams – Roman Gabriel. That, however, does not mean he and Roman weren’t deserving. Unfortunately, Bacon is one of the most overlooked players of all time but it is important to remember him and pass around the word to keep his legacy alive. As the younger voters file into the Hall of Fame voter committee, the odds of players like Bacon making the Hall continue to dwindle.