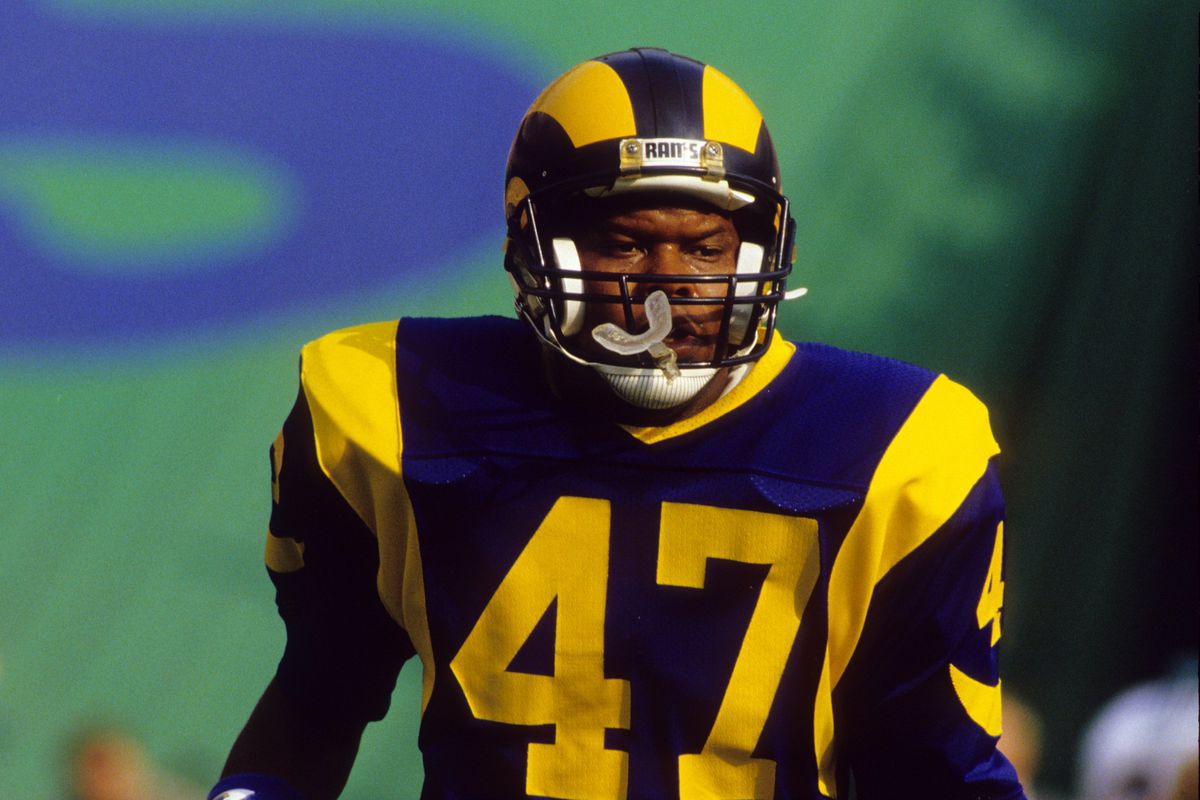 LeRoy Irvin or as he called himself, Iceman, started off his story at Kansas University. The former Jayhawk manned the cornerback position in Lawrence for four seasons. He is tied for fifth all-time for the school in interceptions and sixth all-time in tackles in school history. He was the only player on the roster his freshman year to start as a freshman, which he followed up by leading the team in tackles his sophomore year, he led the all defensive backs on the team in tackles his junior year and his senior year found himself propelling onto the NFL.

Irvin ended up being drafted by the Los Angeles Rams 70th overall in the third round of the 1980 NFL Draft. His rookie season he started two games and logged in two interceptions, five forced fumbles and three fumble recoveries while mainly being utilized as a punt returner. In his rookie season, Irvin ended up playing in the playoffs with an 11-5 Rams team in which he intercepted Dallas Cowboys CB Danny White in the postseason showdown that ended in a 34-13 defeat. Irvin came back in year two of his promising young NFL career and lit up the league as a punt returner, taking back three touchdowns for 615 yards and averaging 13.4 yards per return. In his second year, he also ended up starting a total of seven games and adding three interceptions, three forced fumbles and three fumble recoveries to his stat book. In year three, Irvin found himself adding four more forced fumbles, two fumble recoveries and a return touchdown in what was a down year for him and the Rams as a whole.

John Robinson ended up taking over the reigns of Ray Malavasi after a disappointing 1982. Robinson and the Rams went 9-7 and made the Wild Card to face none other than the Dallas Cowboys again. Irvin ended up having a fantastic year in which he started 13 games, brought in four interceptions, forced four fumbles, recovered two and even had a QB sack. That was the breakthrough year in which Irvin ascended from a punt returner with the potential to start at CB to becoming a legitimate starting CB on a good football team. Irvin picked off Danny White of the Cowboys again and took the interception for 94 yards in what ended up being a Rams revenge win 24-17 over their playoff rival. The next game would be an annihilation of the Rams by the hands of the Washington Redskins 51-7 in which John Riggins ran all over the team for three touchdowns.

Robinson and the Rams found themselves in another season that took them to the playoffs. Irvin had logged his first season in which he started every game at corner for the Rams. He continued the path he was on picking off five passes and taking two of them to the house. Unfortunately, the season ended when the Rams met their match against the Bill Parcells coached New York Giants in what was a close 16-13 loss. The next season the Rams went 11-5 and Irvin found himself joining his first Pro Bowl. Irvin and Gary Green together were one of the most dynamic cornerback duos in football. Both of them picked off six passes each and Irvin took one of them back for a touchdown. Once again, the Rams met Dallas and Danny White in the playoffs which led to Irvin picking off White for the third time in the playoffs and the Rams dominating Dallas 20-0 on their way to the next round of the playoffs. Once again the Rams ran into trouble in the next round in the form of Mike Ditka’s Bears. Ditka’s team suffocated the Rams in a 24-0 loss.

In the next season, Irvin had a new teammate, a young 24-year old Jerry Gray who joined the Pro Bowl as well in 1986 after picking off eight passes. Irvin picked off six, took one to the house, forced a fumble and had three fumble recoveries in which one he turned into a touchdown as well. That year, Irvin found himself as a First-Team All-Pro in what is one of the league’s greatest honors. Irvin and Gray, unfortunately, were not enough in the Rams 19-7 loss to the Washington Redskins. 1987 was a down year for the Rams that had Irvin finishing with just two interceptions and only nine starts after loads of drama in what was a year that had him being suspended for calling out due to having the flu. However, in 1988 the Rams were back and Irvin had another solid season starting every game and adding three more interceptions to his career total. Unfortunately, another good season ended shortly in the playoffs after the Minnesota Vikings defeated the Rams 28-17.

In the last season of Irvin’s career, he did not disappoint starting next to superstar CB Jerry Gray and helping the Rams go to the playoffs again at 11-5. In this season the Rams took down the Philadelphia Eagles in the Wild Card round 21-7 in a game in which Irvin picked off QB Randall Cunningham. The next game the Rams would go into Giants Stadium and win on a game-winning touchdown from Jim Everett to Flipper Anderson. Then after that Irvin’s last game with the Rams would end in disappointment after the Rams lost to the Joe Montana led San Francisco 49ers one game short of the Super Bowl by a score of 30-3.

Irvin was waived by the Rams at the age of 32 in the last year of his three-year contract. He refused to retire and went on to sign a one-year contract with the Detroit Lions in which involved the Rams legend starting for the Lions. Unfortunately, the Lions went 6-10 but they finished ahead of the Rams after a disappointing off-season led the Rams finishing 5-11.

LeRoy Irvin holds near and dear to me due to the fact he went to Kansas in which I have so many bloodlines attached to and he played ten seasons with the Los Angeles Rams. Irvin not only was a star with the Jayhawks and Rams but he’s been an amazing member of the Rams legends community. I’ve had him on the podcast in which you can check out below and I attended his birthday party during my first time ever in Los Angeles. Irvin is a fan of the game he once played, he wants someone to wear 47 the way he did and he always wants to remain a part of the Rams community. LeRoy Irvin is, in fact, a Rams legend and that will never change.