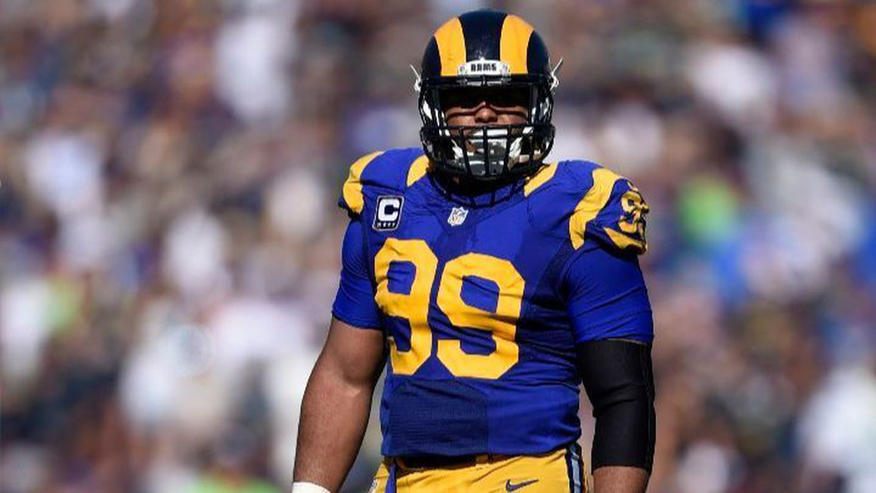 OTAs are here, but Aaron Donald will not be.  Donald, who has not been offered a contract extension yet, is playing on the final year of his rookie deal.  If you recall – Donald held out last year, missing training camp before rejoining the team for the regular season. However, last year, Donald did show up for minicamp in June, so it will be interesting to see if he will be at minicamp this summer. Donald’s absence  for this year’s ORAs was first reported by ESPN’s Adam Schefter.

Donald is one of the league best defensive players and he is projected to net ~$20 million annually when he signs a new deal.  Donald was named the Defensive Rookie of the Year of 2014 and has been a pro-bowler every season he has been in the league. Donald was also named a First Team member of the All-Pro team every year besides his rookie season. After not being offered a contract last season, Donald excelled and was named the 2017 Defensive Player of the Year.

In the past, Les Snead has been willing to offer players contracts before the end of their rookie deal. Former Rams Tavon Austin and Robert Quinn were offered contract extensions before their fourth season and Alec Ogletree was signed to an extension before the start of his fifth season. Snead also signed Nick Foles to an extension before ever taking a snap for the Rams.  It seems out of place that the most accomplished and dominant player the Rams have added since Snead has joined the organization is the one that he is waiting the longest to sign.

In the big picture sense, the Rams still control Donald for the text few year, having him under contract this season and being able to use the franchise tag to control him for another few seasons.  While the franchise tag is a safety net the Rams may have to use, if it is their long term plan to try and control the future Hall of Famer, Donald may not be a life-long Rams as we all had hoped.  A contract extension is still very likely and Donald knows this is a business, as he has said many times before.  When an extension does get done Donald will be a happy man.