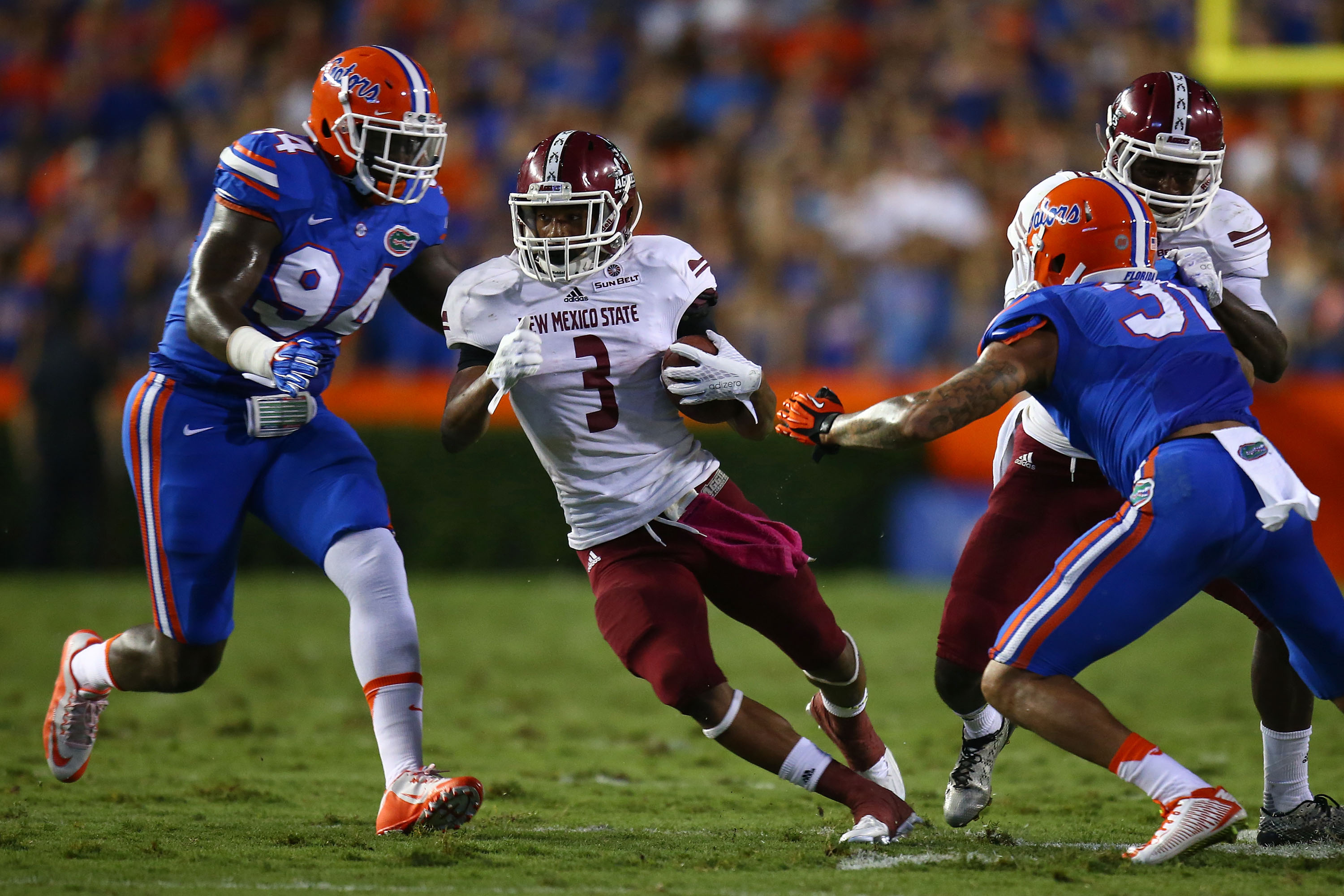 The Rams just claimed former Titans UDFA RB Larry Rose III off of waivers and now the fun is starting to brew in that the L.A. running back room. (Rob Foldy/Getty Images)

When you first take a look at the big dog in the huddle Todd Gurley, you see the best running back in the league, explosive 6-foot-1 and 220-plus pound back with elite athleticism and power. Gurley won the Offensive Player of the Year and likely should have been the MVP. Regardless, Gurley leads the RB position following in the footsteps of Rams greats like Steven Jackson, Marshall Faulk and Eric Dickerson.

Next, you have the rock solid consistent bowling ball of a running back that is Malcolm Brown. A former no.1 overall RB recruit out of high school. The former Texas Longhorn has earned the backup role for the Rams after being signed as an undrafted rookie free agent and a priority one at that. Brown shows the ability to run with power and balance. He doesn’t offer much as a pass catcher but he does display the ability to work in pass protection.

Moving onto the newbie by way of the draft you have Tennessee Volunteer RB John Kelly. Kelly displays the power and agility to turn himself into a nightmare change-of-pace back for the Rams. Kelly is likely going to fill the void that the Rams tried to fill in the first place with last year’s free agency signing Lance Dunbar and the recently traded Tavon Austin. The Tennessee talent was a sixth-round pick but he’s sixth-round pick that the Rams have big plans for. 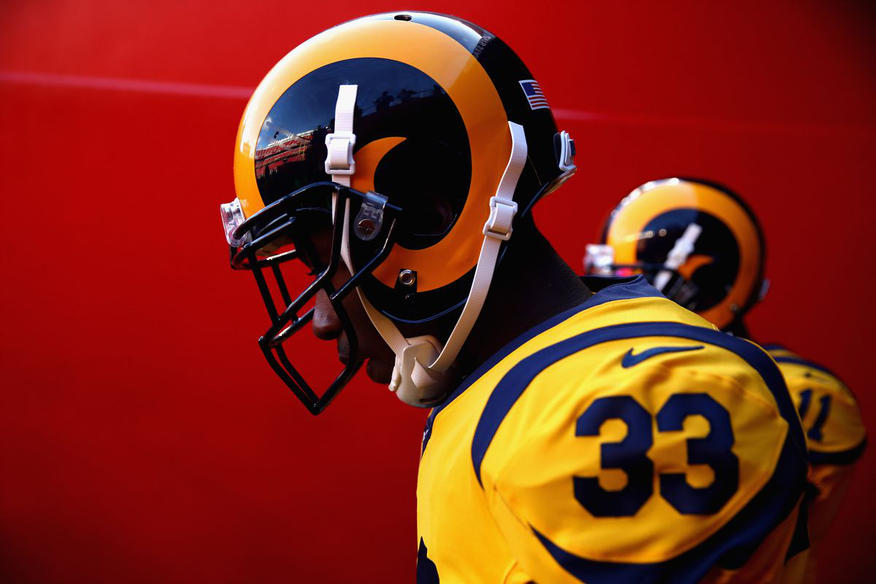 Justin Davis is ready to get his chance in 2018 after spending the majority of his rookie year on the pine. (Ezra Shaw/Getty Images)

Alas, you have the hometown guy from USC Justin Davis who was already an early training camp fan favorite but then he got the chance to play in preseason and won over some people. His only issues are pass protection and his ball security but Davis displays a great deal of burst while running in between the tackles and has a ton of agility that allows him to potentially develop into a legitimate one-cut back. The Rams held onto him on their active roster all season despite Davis logging six snaps his entire rookie season.

The cover guy of this piece is Larry Rose III and he is now coming to the Los Angeles Rams by way of a waiver claim. He comes in as one of my sleepers to watch. I ranked him my 13th-overall running back in this draft class and I feel as though he displayed excellent acceleration and vision. The Rams claimed him after the Tennessee Titans waived Rose III due to a log-jammed backfield that includes former 2nd-round pick Derrick Henry, marquee free agent Dion Lewis, role-playing RB David Fluellen, former Iowa Hawkeye star Akrum Wadley and Dalyn Dawkins.

Lastly, recently signed former QB, RB and WR now just going to play RB Nick Holley joins the fray and flashes the same ability that New England Patriots star WR Julian Edelman displayed from the same exact football program at Kent State. Holley was listed as a defensive back on NFL.com recently and it looks like he is just going to stick to RB. Holley is a shifty back with athleticism that makes me think of cross-town rivals’ RB Austin Ekeler. He could be an intriguing player that turns heads throughout camp.

So with all of these backs now the Rams are looking fun, prepared and exciting at the running back position as we head into the 2018 preseason. Obviously, Todd Gurley is not losing his job anytime soon but watching last year the Rams didn’t have much to rely on to back up Gurley besides Malcolm Brown. It will be interesting now that the Rams only have three returning RBs from 2017 and three brand new faces in that room. The most important element with who backs up or spells Gurley to give him a breather has to be the element of consistency and efficiency. The Rams are looking for someone that can come in and give their star a rest without completely shifting the offense to neutral. The team and of course, Head Coach Sean McVay wants someone to be able to catch passes out of the backfield similar to Chris Thompson in Washington. However, a big thing for the Rams will be finding someone that does it all and most importantly displays the ability to pass protect because in a heavy play-action offense, the QB, Jared Goff will have to be kept upright to see the full effects.

How many of these backs could see the opening day roster? It’s an interesting question. The Rams did waive Lenard Tillery the former UDFA out of Southern so that leaves the team with a total of six backs. I don’t see the team keeping all six or necessarily even five (even though it’s possible) so it’s likely to be four and we already know Gurley, Brown and Kelly are going to be the favorites to land the first three jobs on the roster. So, that would leave Davis who was on the roster last year and two UDFA’s that each have some fun ability to fight for the final spot. Due to the fact that Davis was on the roster all season long, you would think he would be ineligible for the practice squad. However, per the rules, as long as Davis did not suit up on game days more than 8 games he is eligible. Davis only played in four games and so he would be a practice squad possibility along with the obvious two other UDFAs.

The big sleeper in this group is definitely Larry Rose III. I think he brings a ton to the table, I think he has some of the skillsets that Justin Davis and John Kelly have but he has no trouble with ball security like Davis and is much faster than Kelly. Rose III is definitely the player to watch but the overall takeaway about this all is that the Rams took a position that they had the best player at and no depth behind him and added a lot of exciting young depth that could turn this group of backs into one of the best in the league.