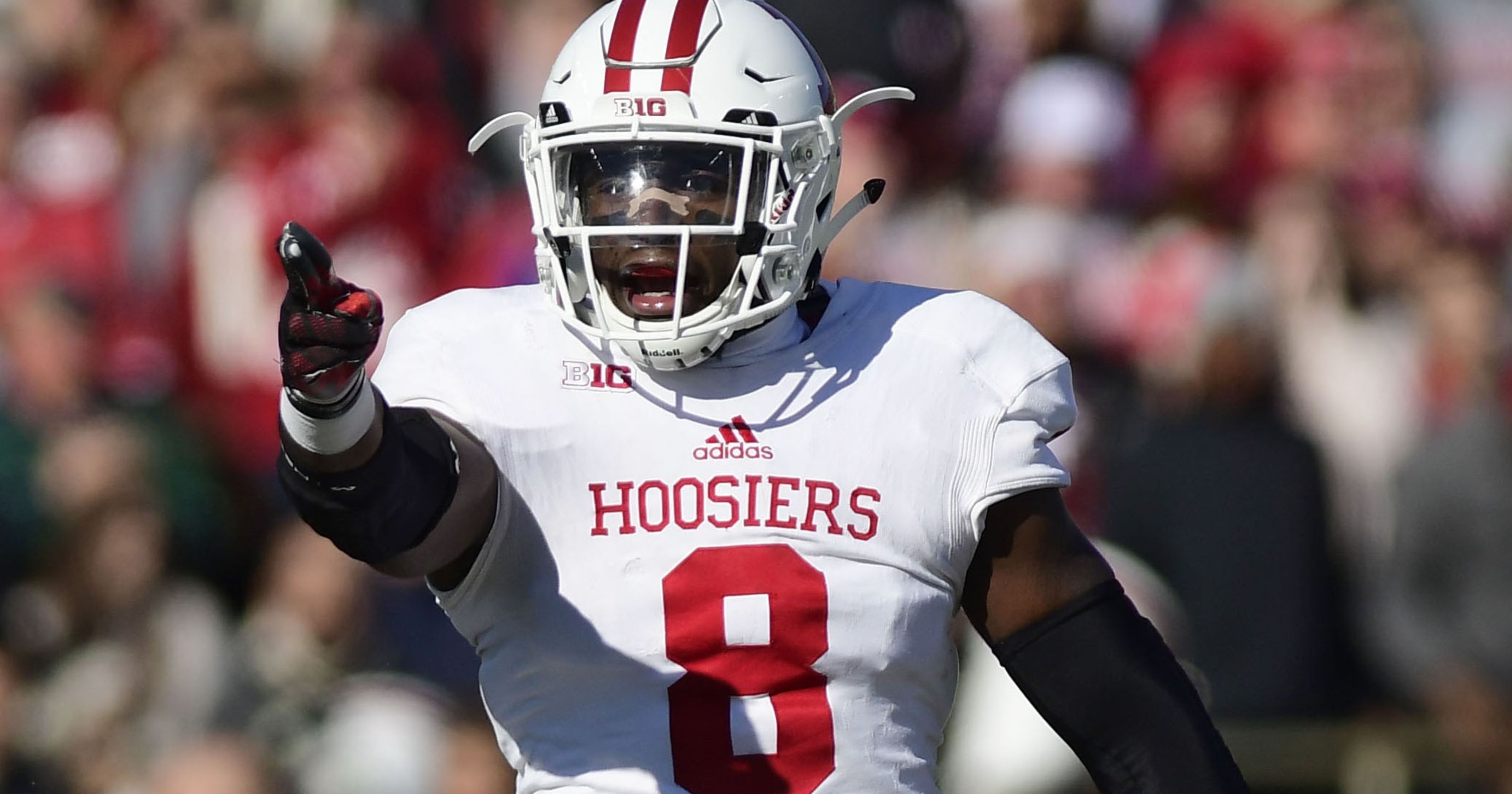 The 2018 NFL Draft has concluded and the Rams gone ahead and have signed ten more players to the off-season 90-man roster. Here are the ten UDFA’s, what they bring to the table and the odds of them making the roster. 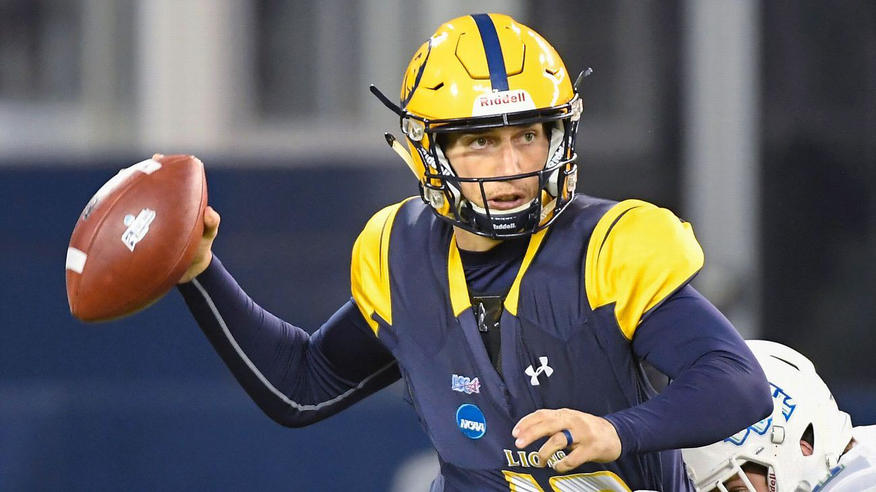 An intelligent QB that played with good awareness and feel for the game. He doesn’t have the velocity but he has the accuracy, pre snap IQ and solid NFL size. He does not have the mobility teams want but this is an undrafted rookie signing that has a chance to compete with Brandon Allen in camp. The Rams had shown a lot of interest in him and Perez is someone that has an incredible story of really never playing QB until 2013. He went through some programs getting passed on the depth chart until joining Texas A&M Commerce and having an impressive influence there. Texas A&M ended up inviting him to their Pro Day as the QB that would be throwing to receivers like 2nd-round pick Christian Kirk. This is definitely a player to monitor this off-season.

Chances of making the roster: 3/10 – This has classic “we are going to try and develop this kid and place him on the practice squad” all over it. His extreme accuracy and intelligence could knock Allen off the roster. 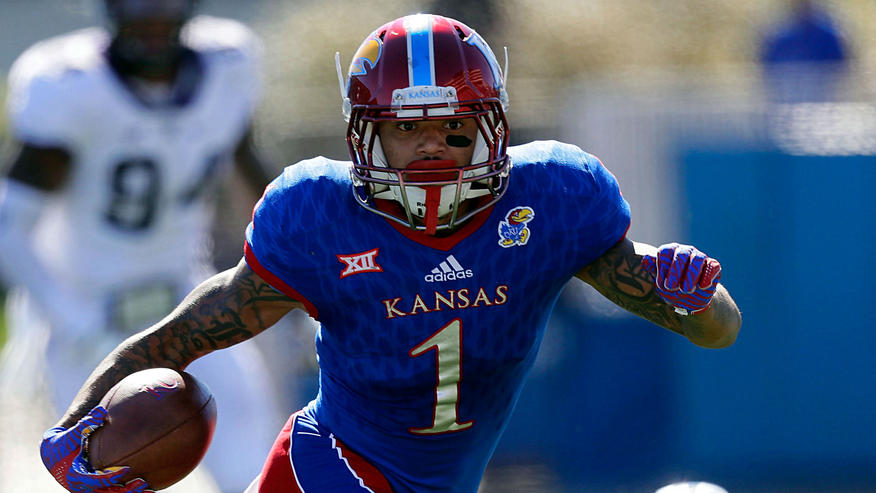 I know a lot about the former Kansas speedster. LaQuvionte Gonzalez was a WR that was brought over from Texas A&M by Head coach David Beaty. He had 729 receiving yards and three touchdowns in 2016. He shows great change-of-direction and ability to make a man miss in space. Despite his small frame, Gonzalez shows the impressive ability to go up and challenge for the 50-50 ball. Gonzalez was dismissed for the Kansas football program due to academics and so he went to Southeastern and since signing with the Rams, he’s the first player in their school’s history to join the NFL.

The Rams moved on from Tavon Austin during this draft and lost a lot of speed doing so. If the Rams are looking for a gadget guy to return kicks, punts, end-arounds and trick plays (he once laid down in the end zone and camouflaged on a trick kick-off play) then I think Gonzalez would have an opportunity to make this team.

Chances of making the team: 5/10 – Tavon’s departure leaves the door open for Gonzalez at the back end of the roster. 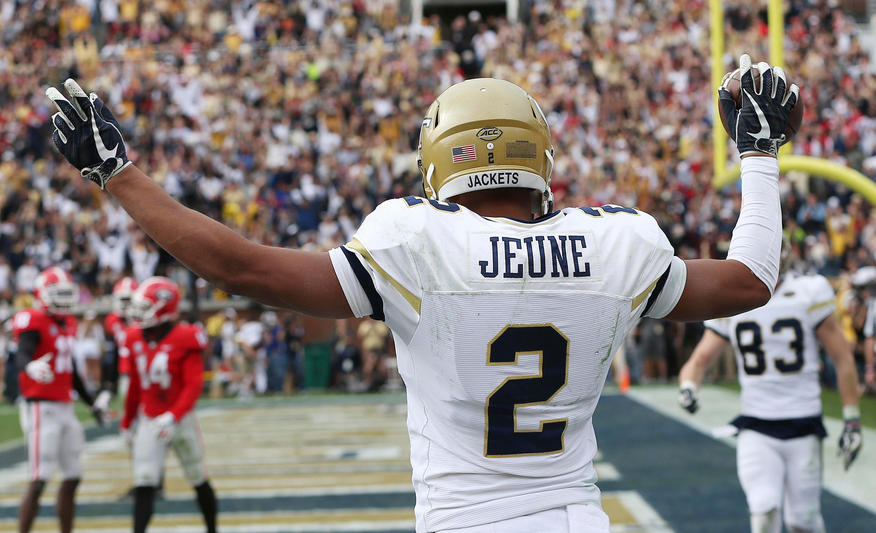 Mel Kiper actually viewed Ricky Jeune as a legitimate draft prospect. Kiper explained that Jeune is coming form a school that has produced NFL wideouts, he is someone that is able to fight for the ball, make a play after the catch and is an effective blocker. Jeune totaled 74 catches, 1,492 yards and 11 touchdowns with the Yellow Jackets. He doesn’t have great speed like former Georgia Tech WR’s like Demaryius Thomas, DeAndre Smelter, Darren Waller and Stephen Hill had in the past.

Sean McVay loves his receivers being able to do it all and especially being able to give effort in the blocking department. Jeune could be a sleeper pick to make the 53-man roster and push guys like Fred Brown and Mike Thomas who are at the back end of the depth chart.

Chances of making the roster: 4/10 – I like Jeune but I can’t give him a higher chance than Gonzalez. Gonzalez offers a type of WR the Rams now do not have. Jeune is going to have to push Thomas or Brown off the roster. He still has an opportunity and is pretty talented. He will need to win on special teams to have a shot. 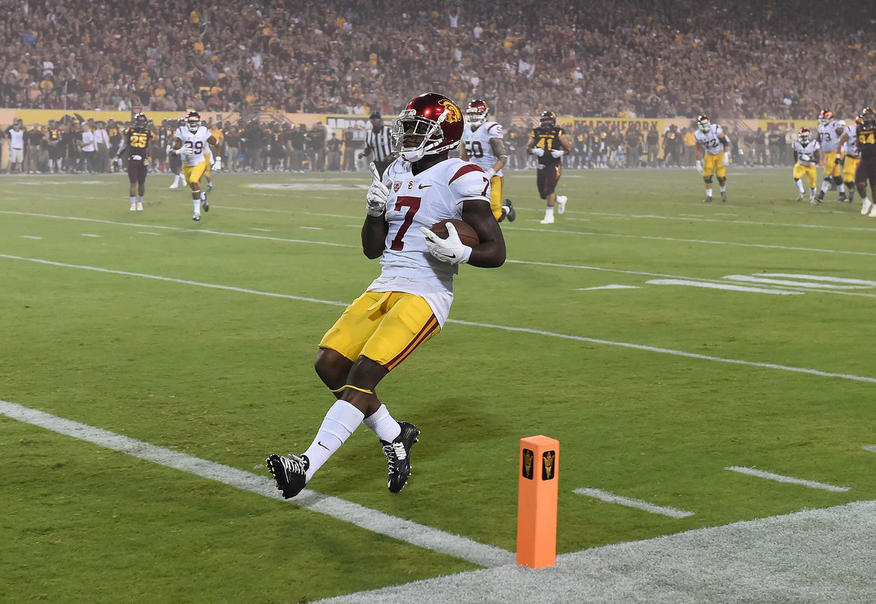 Steven Mitchell is another player I have watched a lot of at USC. Mitchell gave Sam Darnold a lot to work with as someone that could create separation, stretch the field and operate out of the slot even at times being the security blanket for the young QB. With Mitchell, the issue isn’t talented, he likely could have been drafted if he had produced more in college. He didn’t produce more because he had battled so many injuries mainly to his knee. I think he offers a lot but struggles with tracking the ball downfield. He might be the most likely to make this roster because he was a draft-able player that didn’t go in the draft due to his injuries.

In some cases Mitchell reminds me of how Antonio Brown was coming out of Central Michigan, similar in stature, similar as a route runner, reliable and quick as a reactor. I’m not saying he will be Brown, but I think this is seriously someone to monitor in camp.

Chances of making the roster: 4.5/10 – He’s likely the most talented WR the Rams signed as a UDFA. I could see McVay falling in love with his route running and his acceleration. He’s a hard worker that continues to plug along even after all of the injuries. He will have to show he can win on special teams though. 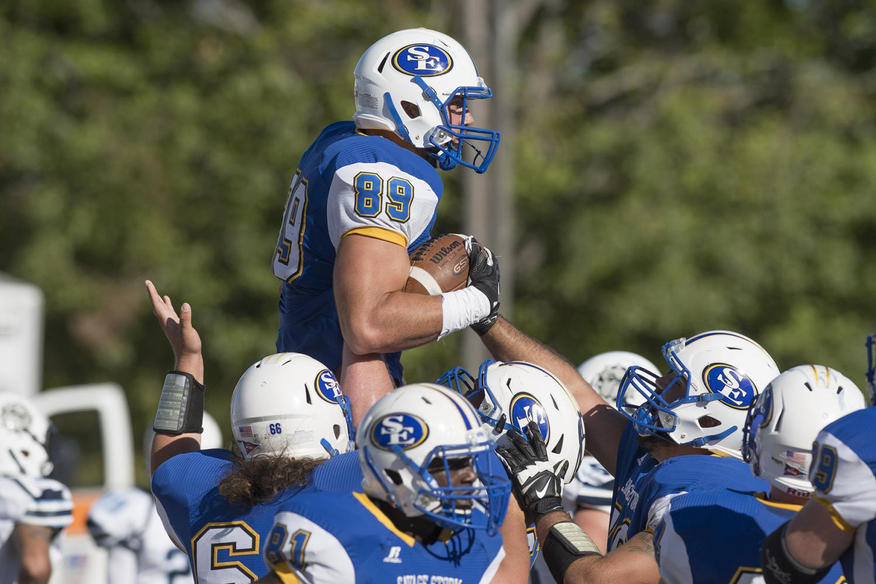 A three-sport athlete that played college basketball for Oklahoma State decided to give football a try by walking on at Southeastern Oklahoma State and now he’s a Ram. He caught five touchdowns while he was there and will join a TE room that has Gerald Everett, Tyler Higbee, Temarrick Hemingway, Johnny Mundt and Henry Krieger-Coble. McElroy has a nice frame for the NFL so while he is a project, he will be interesting to watch in camp. Tony Gonzalez, Antonio Gates and Jimmy Graham are notable names that came from division one basketball and went to the NFL to play Tight end.

Chances of making the roster: 1/10 – He has his back against the wall. Everett, Higbee, Hemingway and Mundt have all been on the Rams active roster at some point. The Rams added Krieger-Coble as well, it will depend on how many TE’s the Rams keep but McElroy has an extremely low chance of making the roster. Still, that doesn’t mean with his projection, the Rams wouldn’t consider putting him on the practice squad. 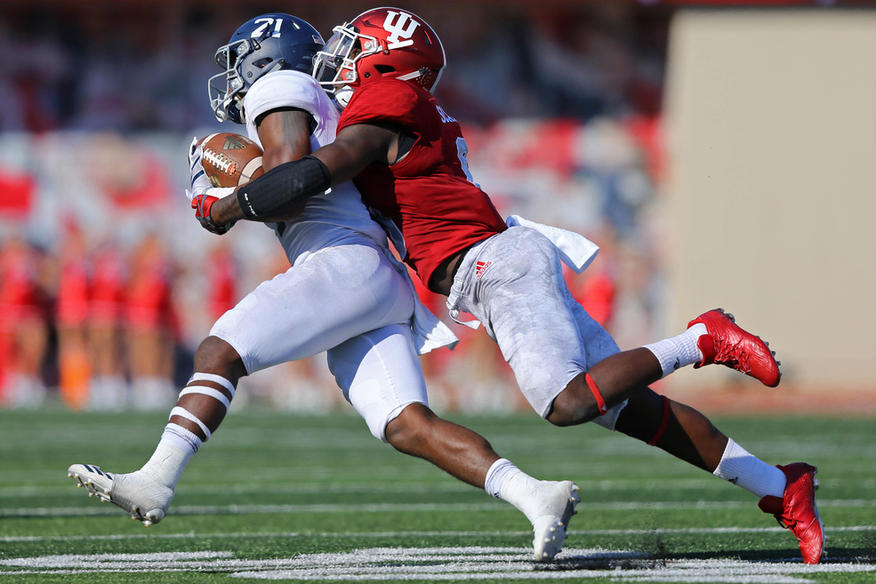 It’s no secret how much I like Tegray Scales. He graded out as my 77th overall player in this class and I believe he would have been the best pick the Rams made all draft. He’s that good. Sometimes, players just slip through the cracks, this one was a mistake. Kyle Crabbs of NDT Scouting feels Scales has parallel’s to last year’s first-round pick Haason Reddick and Jonah Tuls of NDT Scouting feels like Scales was a top 60 value and could have a similar impact as Falcons LB Deion Jones. Scales had monster production as a Hoosier with 324 total tackles, 46 tackles for a loss, 17 sacks, eight interceptions, one touchdown, six pass breakups and two forced fumbles. Scales has elite instincts, he has versatility as a linebacker that can stop the run and cover downfield but Scales also has bend around the edge and shows ability to rush the passer.

The Rams have Mark Barron, Cory Littleton, Micah Kiser, Bryce Hager, Travin Howard & Ramik Wilson. I believe regardless of who was picked where Tegray Scales will make this roster. He has a chance to be a starter in year two but would likely be a fun sub-package player in his rookie year. Regardless of any of that, Scales is a special teams ace and will add even more value when the Rams have to decide whether or not to keep him.

Chances of making the roster: 10/10 – I’m calling it now. Barring injury, Tegray Scales will be a contributor this year for the Rams and end up as a starter in either 2019 or 2020. Scales gives the Rams a ton to work with and with the Rams coaching staff, Scales could turn into a great starter down the road. 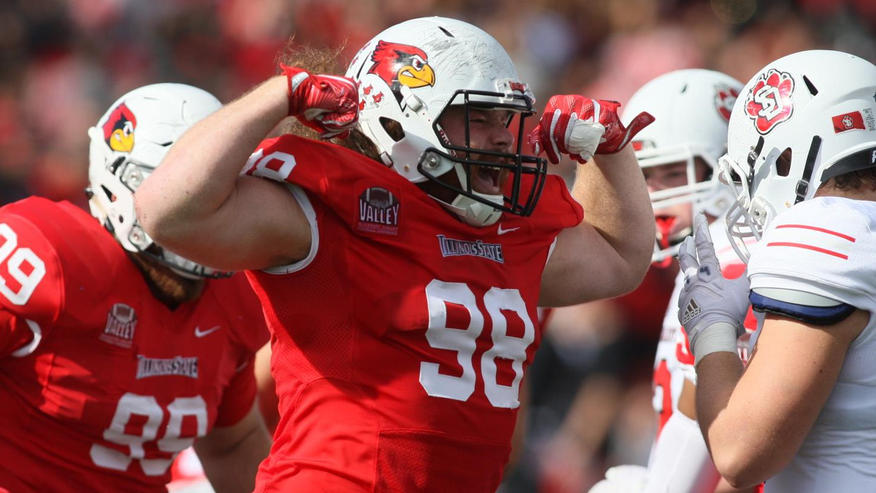 Originally a monster pass catcher in high school, Illinois State moved him to defensive line duties. He showed the versatility to play as a nose tackle and in the three-technique . Keene has a high motor and is strong but he’s going to really have to work to make this roster. Keene is likely looking at a practice squad stint as he does not have great upside as a pass rusher and he doesn’t have the interior line quickness you look for.

Chances of making the roster: 0.5/10 – Keene is going to have to be nearly perfect this summer in order to win a job. This is one of the strongest DL rooms in the entire league. The Rams have Aaron Donald, Michael Brockers, Ndamukong Suh, Dominique Easley, Tanzel Smart, Morgan Fox, Omarius Bryant, Ethan Westbrooks, Sebastian Joseph and will have another fellow UDFA McKay Murphy. It’s going to be near impossible for Keene to make the 53. 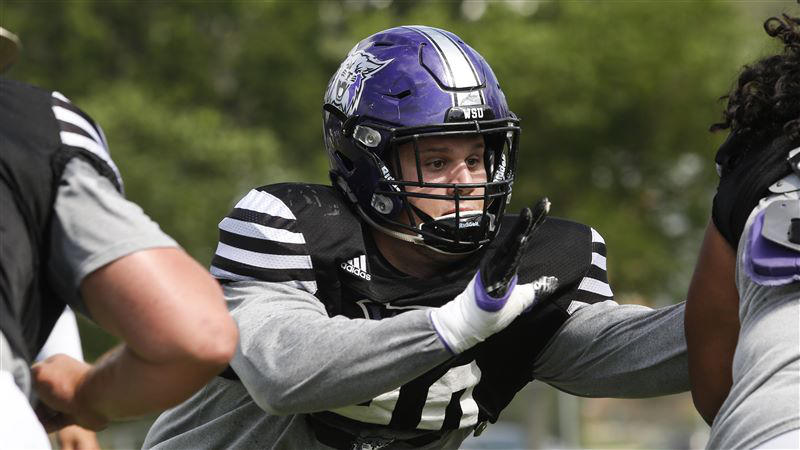 McKay Murphy is one of the big sleepers in this UDFA pool. He has big-time pro bloodlines being the son of Braves legend Dale Murphy and he dominated his pro day posting a 4.81 forty-yard time, 40 reps on the bench, 31-inch vertical, 4.55 20-yard shuttle and a 7.2 second 3-cone drill. Obviously, Murphy is a workhorse and with the quickness he possesses and the power to shed double teams, Murphy could find himself on this roster.

Chances of making the roster: 7.5/10 – I think the measurables are there, the work ethic is there and the versatility whether he wants to take on double teams, rush the passer or eat gaps is going to impress the Rams coaching. Murphy will be tough to keep off the roster. 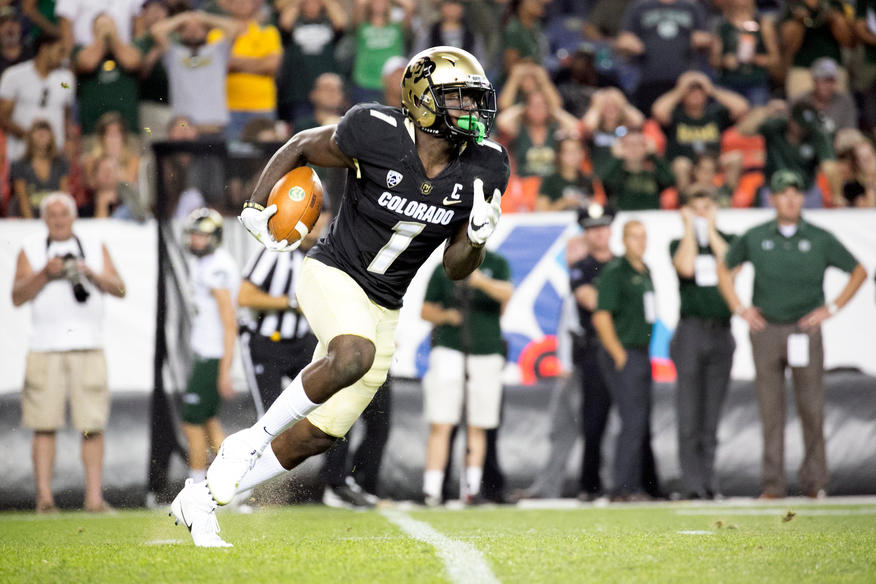 He didn’t run that well at his pro day and it’s why Laguda fell out of the draft but make no mistake the ball skills and the size are there. A former captain that has burst and reckless abandon when playing the ball carrier. He needs to get better at being a consistent cover guy and much better at wrapping up and tackling instead of trying to go for the big hit.

Chances of making the roster: 5/10 – With the lack of depth on the Rams at the Safety position and only five on the roster at the moment, Laguda has a chance. 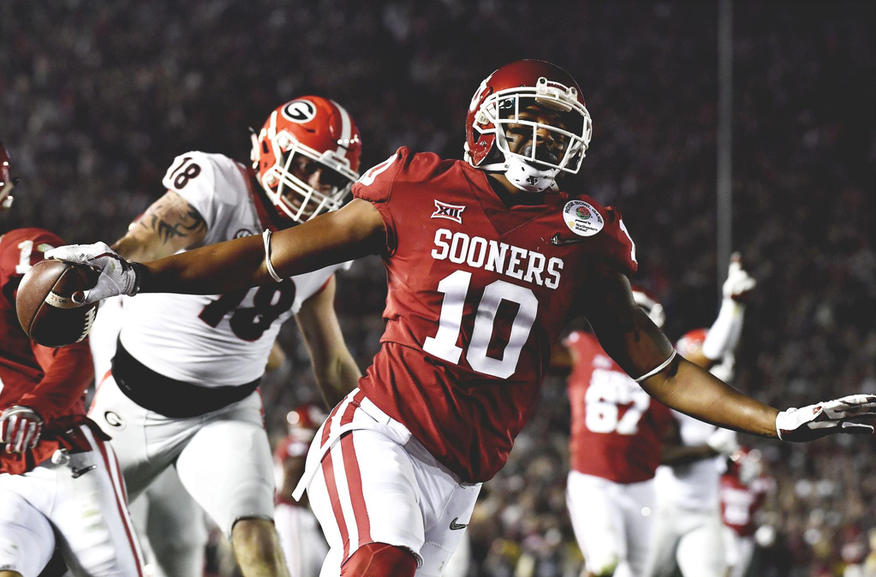 Parker joins his teammate Ogbonnia Okoronkwo as a Ram. He has NFL size, he was a three-year starter and played a role on special teams. Parker ran in the 4.5’s and doesn’t really have the ball skills or cover skills to play free safety. He is a sound tackler that is aggressive and reliable. He shows the ability to be rushed as a blitzing safety. Parker will have to earn his role on special teams because this is a strong safety through and through which limits just how much he can provide to the Rams. Still, a fun player to watch that plays with a ton of energy.

Chances of making the roster: 5.5/10 – Once again with the lack of depth at the position Parker could sneak his way onto the roster. 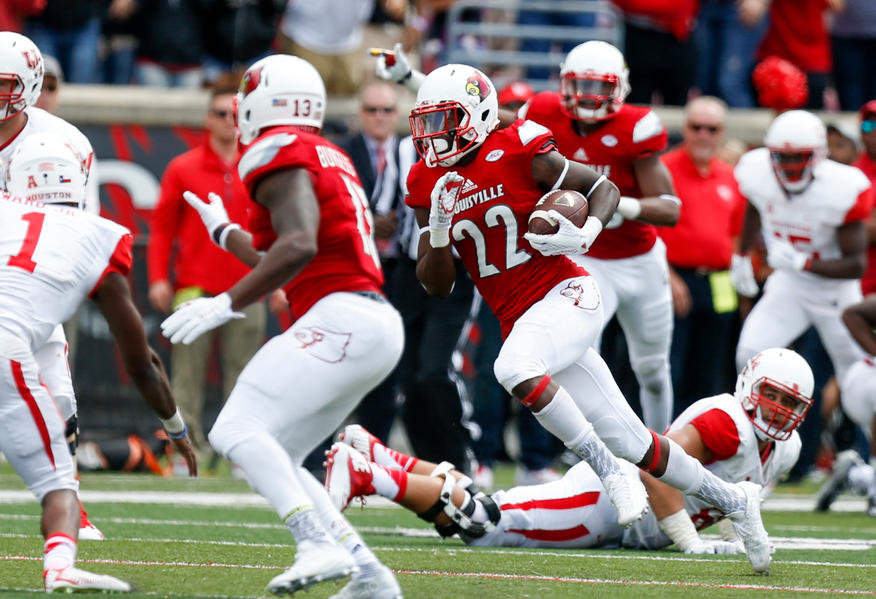 Chucky Williams plays violent and explosive. He did not run relatively well at his pro day but he displays ball skills, run support range and special teams experience. He is the only true combo safety in this UDFA class and because of that and his ability to dominate in punt and kick coverage he has a chance to make to make this roster more than any of the safeties.

Chances of making the roster: 6/10 – Not a lot of bodies at safety but Williams would give the Rams someone who can play both positions and of course the idea of having a day one special teams ace.

Revisiting my Free Agent and Draft Predictions for the Rams