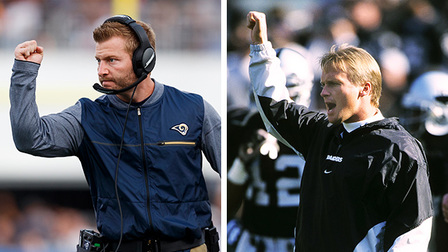 The first thing you may notice is that the Rams will play both the Oakland Raiders and the New Orleans Saints in both the Preseason and the Regular season.  This is big as it will give the Rams a chance to scout both of these teams.  Of course this goes both ways so it will be up to the Rams coaching staff to get more out of the games then the other teams coaches. Both of these teams have good offenses and will give the Rams defensive players a chance to prove themselves.

The good thing about this schedule, for the Rams, is that they will be playing 3 teams with respected head Coaches who have all won a SuperBowl in John Harbaugh, Jon Gruden, and Sean Payton.  This means that the Rams players will play well coached players thus giving the coaching staff a good look at players on the bubble and seeing how they play against well coached teams.  Hopefully this will give the preseason games the feel of a real game which will get the players in the right mindset upon entering the Regular Season.

As you can see the Rams will play the Houston Texans in week 3.  This is usually known as the “Mock Regular Season” game where the starters play for usually a quarter.  This may actually be the worst team for the Rams to play as they will probably not be playing Deshaun Watson and therefore the starting defense will not get to play a top level Quarterback.  This would have been a good test for them but they will most likely be playing the backup Quarterback.  The good news though is that the corners will still have a chance to go up against DeAndre Hopkins.  It should also give the Rams’ offensive line some practice against top talent as the Texans should have JJ Watt, Whitney Mercilus, and Jadeveon Clowney healthy.

The Rams will play both Oakland and Houston at home.  The Oakland game will be one of the most interesting to see as it will be  Gruden vs McVay matchup #1.  Another thing to watch will be the attendance of Los Angeles Rams fans vs Oakland Raiders fans.  It will be a return to the Coliseum for the Raiders and battle between teacher and student.  It should be a fun first game between the two teams.  Overall this preseason should provide the Rams players a good chance to prove themselves and through that hopefully the Rams will be able to keep the best possible players for the final 53 man roster.