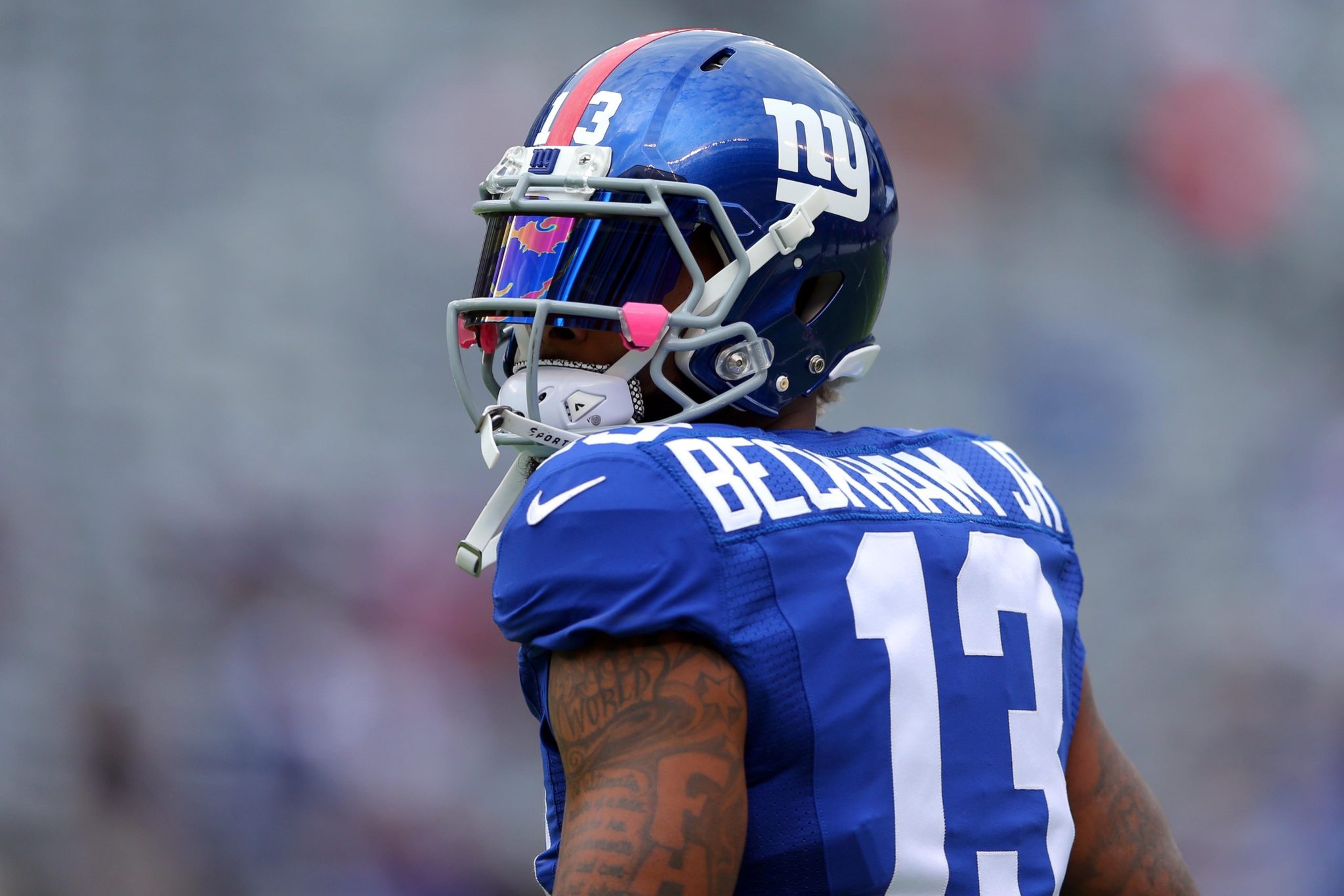 Imagine yourself standing at just 5-foot-11 and 198 pounds being drafted in the first round of the 2014 NFL Draft and being called a reach of a pick. Imagine the hate mail you received while rehabbing an injury during the first four weeks of your rookie season. Now, imagine you are Odell Beckham Jr. and you finally put all of the nay-sayers to rest. Well, that is what OBJ did and now he’s one of the best receivers the game has ever seen. Even better, he’s only 25-years old.

Beckham Jr. has played for the New York Giants in a quest to lead a respected organization to the promise land with the help of a stout defense coached by Super Bowl-winning defensive coordinator Steve Spagnuolo and led by two-time Super Bowl winning franchise QB Eli Manning. Unfortunately, that still hasn’t happened yet and the 2017 season was what one would call Beckham Jr.’s total nightmare. He suffered a serious ankle injury in a meaningless preseason game and then later on in the year the ankle gave out and was fractured. That’s not to mention the fact his team was completely uncompetitive under former Head coach Ben McAdoo.

It’s another year and a comeback year at that for Odell Beckham Jr. and the 25-year old is looking to receive some long-term security as far as where he will play football for the majority of his career and of course how well will he be compensated for being arguably the best in the league to play the position he plays. With the new era of Giants football in construction, there is a doubt that Beckham Jr. will be extended and there is increased likeliness that he could be traded away.

The young star WR is looking to be the highest paid receiver in the game so anything less than that could mean he walks away from the Giants in free agency and opens up a new chapter. Which leads us to that new chapter (or potential new chapter) Los Angeles. Odell has been all over the headlines for seemingly everything, it’s like the media wanted to force him out of town and they could be doing just that. The next chapter in Odell’s story could be in Hollywood. The Los Angeles Rams have made more headlines than even Odell or anything in New York could make during this NFL off-season. The team brought in Marcus Peters and Aqib Talib, two high-energy stars that could change the team right away. The team also just recently signed Ndamukong Suh to a one-year deal to pair with Defensive Player of the Year, Aaron Donald. So why wouldn’t the Rams take a shot at Beckham? Well, this isn’t an opinion of why the Rams should go after Beckham because guess what? That already seems to be the plan as the Rams have officially made their number 23 overall pick in the 2018 NFL Draft available for trade in regards to Odell Beckham Jr. To even add more substance to that, according to the New York Daily News, Beckham Jr. was contacted by a few Rams players on joining the team and he responded with the fact he “wants in”.

It seems crazy that one of the most recognizable figures and stars in the league today would ever be traded but crazier things have happened. The Rams are the prime destination though for Beckham. The antics are overblown and don’t matter to the Rams. At the end of the day, the Rams have continued to upgrade their roster by taking advantage of teams giving up on players due to their unlikeable personalities. Sean McVay and Wade Phillips are not afraid to add talented players that are rough around the edges. As for the Rams pitch for Odell, do they really need one? He saw them flat-out stomp on the throat of the Giants from the sidelines when the Rams went into Metlife and put a beatdown of the G-men 51-17. He saw the Rams play in their playoff game against the Atlanta Falcons from his couch after New York fell about 8-to-9 games short of making the playoffs.

Should Odell be sent to Los Angeles a few things would happen. First of all of the things, the Rams would have to show Odell that they are committing to him long-term. Secondly, the Rams would have to figure out how to fit him on the roster this year with the way their salary cap is structured. Third, they would need to make sure they were doing right by Aaron Donald and paying the home-grown guy first before paying the new-comer. Lastly, the Rams would just have to feature OBJ. It’s not hard, sure, the Rams had Sammy Watkins last year and he was only targeted 70 times but with Odell, the targets really wouldn’t be an issue. This is someone that single-handedly took down defenses with his ability to run crisp routes, utilize his smooth hands and his rare run-after-the-catch ability in which he showed he could take a five-yard slant and turn it into an 80-plus yard touchdown.

Beckham Jr. would have a chance to fulfill the ultimate legacy of becoming the greatest wide receiver of all time if he went to the Rams. First off, the talent Odell has is undeniable and it’s likely the best in the league at the position. Second, forget about New York and having to take on the double teams and have an older QB throw you the football that doesn’t have the time to anyway. Think about a young 23-year old QB in Jared Goff with a great arm, pocket presence and a pocket to be able to feed you the football. Think about following in the footsteps of legendary WR’s that donned the horns before you in Isaac Bruce, Torry Holt, Henry Ellard, Tom Fears and Elroy Hirsch. Just think about the number of opportunities you would have playing for the number one offense in football and having the likes of Todd Gurley, Robert Woods, Cooper Kupp, Josh Reynolds, Gerald Everett and others to take the load off him. That’s not including the mentioning of the mastermind Head coach that is Sean McVay. McVay took the worst offensive team in the league to first by utilizing a very crafty offensive scheme. OBJ is on an extraordinary pace even after the injury that ended his 2017 campaign early. Beckham Jr. in his first four years has played in 13 fewer games than Jerry Rice did and has only five fewer touchdowns (35) than Rice did as well as only 457 less receiving yards (4,424) than Rice.

Odell has a chance now to join a Super Bowl contender and possibly take them from contender to favorite. He has a chance to go from one of the greatest receiver’s of all time to being the greatest of all time. It just all depends on his current team and the Rams. Does the deal get done? If you want my lasting thought, I believe Odell Beckham Jr. and his No.13 jersey come to the Los Angeles Rams where he ends up joining Aaron Donald and Todd Gurley in what would be the best trio of superstars on a roster in the NFL. Yes, I am not only all for Beckham, I believe that Beckham will be traded to the Rams. The Rams will likely offer their 23rd overall pick in the 1st round of the 2018 NFL Draft and potentially another pick or player such as maybe Mark Barron. At the end of the day, I expect Beckham Jr. to join Ndamukong Suh, Aqib Talib, Marcus Peters and Sam Shields in what would be the most dominant off-season in recent memory. Once this has been done, of course, it’s time to face the ridiculously high expectations and win the Super Bowl.