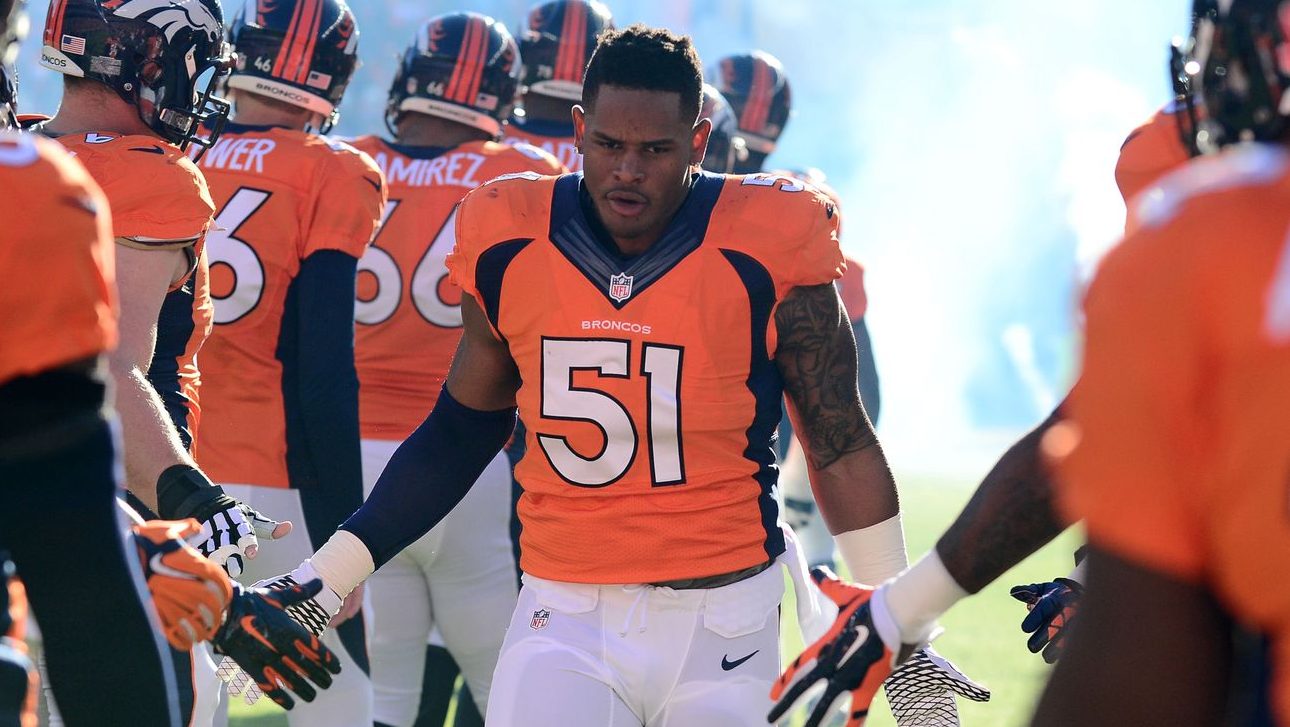 Free agency has yet to start but teams are allowed to come to terms and agree on deals however, they will need to wait until the free agency period starts. The Rams have made just one transaction and that was the re-signing of slot CB Nickell Robey-Coleman. Now, the Rams are left to take a look at making moves in the second wave of free agency. After the trade of Alec Ogletree and the uncertain future that lies ahead with Mark Barron, the Rams have to delve into free agency and the draft to likely fill the position. In this piece I will go through each individual option at inside linebacker and make a decision at the end whether the Rams sign zero, one or two players and if they do sign anyone, who will it be. 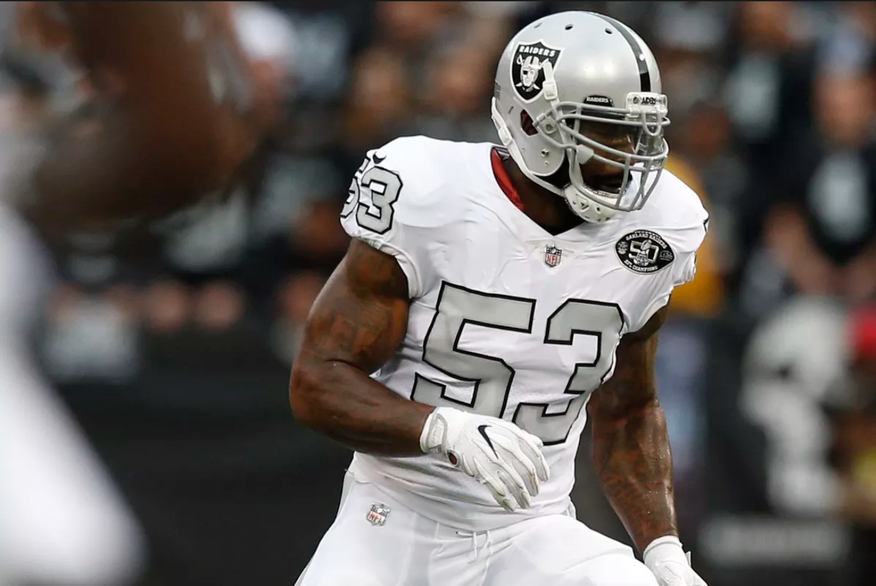 At one point NaVorro Bowman might have been the league’s best inside linebacker but then he suffered a gruesome knee injury in the NFC title game that would hurt his career. Even still, Bowman came back and went onto play for the Raiders in which he started off struggling but finished strong and might have earned himself a nice payday which should be coming fairly soon.

Bowman was the 11th ranked linebacker by Pro Football Focus. He was 17th overall in run defense, 24th in coverage and 12th in pass rush. The former 49er captain only signed a one-year deal worth three million dollars and now he hits free agency. The Raiders under new Head coach Jon Gruden are reportedly interested in bringing back Bowman but the team also finds interest in bringing in Zach Brown.

Bowman may have a serious injury history but at 29 and the way he played this past year? It will be hard for any team that has a need at linebacker to ask him to fix it. 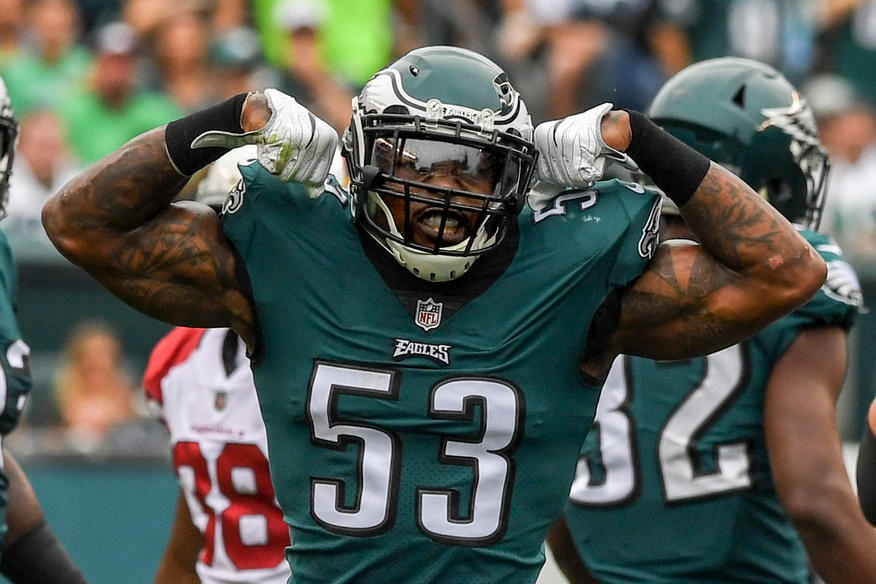 Nigel Bradham is coming off a Super Bowl win and an impressive year for the Phildelphia Eagles. He’s set to hit free agency as reportedly 10 teams are interesting in Bradham’s services. What Bradham does as well as anyone is cover. He was rated the sixth highest linebacker in coverage, 21st in pass rush and 65th in run defense. He is a bit of a liability as a run defender which could be a problem but he’s such a dominant cover linebacker that it’s hard to totally knock him on it. Bradham finished the season as the 21st highest rated linebacker.

The worry here is that his last two years in Philly have been the best years of his career and with Bradham set to leave and the Eagles already handpicking his replacement, Bradham could either stay the same as far as production wise or completely fall down and hit a wall.

Once again by agreeing to bring on Bradham you are giving the okay to someone that will be a dominant cover linebacker but will have a hard time stopping the run. 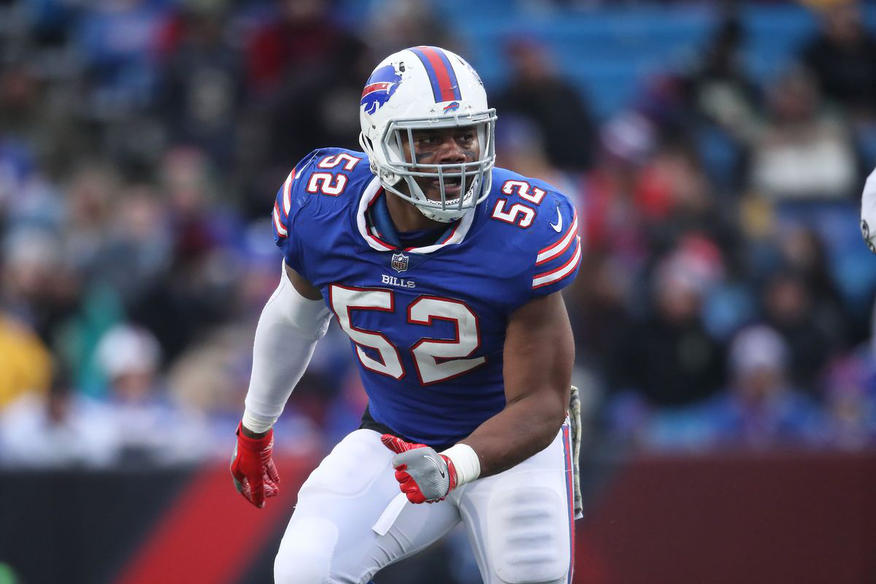 Preston Brown would be another Buffalo Bill player to add to the list of former Bills on the Rams. Brown recently opened up on his thoughts on leaving Buffalo to play for the New England Patriots so it’s likely that he and the Bills are far apart in negotiations and Brown will be hitting free agency. Pro Football Focus didn’t grade Brown out all that well this past season. He came in 42nd place out of all linebackers, 41st in run defense, 36th in coverage and 33rd in pass rush.

Brown according to Spotrac has a market value of $8.4 million annually. His total market value would be 4 years, $33,800,740. That is going to be way too much for the Rams likely but perhaps with the scenery, the Rams have to offer as far as being in Los Angeles, with a younger coaching staff and a superstar rising team, the Rams could talk Brown down on his offer.

Brown certainly has a perk that he does not turn 26 until the month of October. 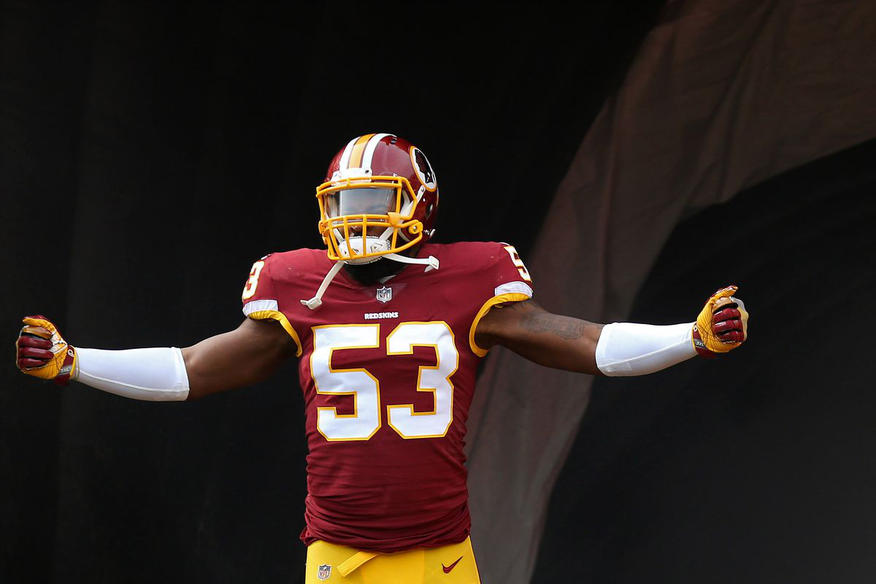 The tackling machine signed a weird one-year not even worth three million dollars. Sure, the Rams probably made a mistake in not bringing him in last year but this year the team has a shot. The only issue is that it was reported that Zach Brown turned down a $7.50-9M per year contract. That would put him in the high price point the Rams might not be able to pay.

However, when you look at Brown he has had a really good career. Although this season he wasn’t rated the highest by Pro Football Focus when he came in 52nd out of all linebackers. Brown came in 10th place in run defense, 77th in coverage and fifth in pass rush. Brown played in just 13 games this past year and had 127 total tackles to his credit.

Brown likely will be headed to Oakland who has yet to spend really anything substantial thus far and will likely be looking to get Jon Gruden his “Gruden Grinder”. Brown would be an excellent fit for the Rams with his ability to stop the run but he struggles so badly in coverage it’s hard to have a player like that. The price tag is likely going to be way too high for the Rams at this point in time and Brown will likely go somewhere else. 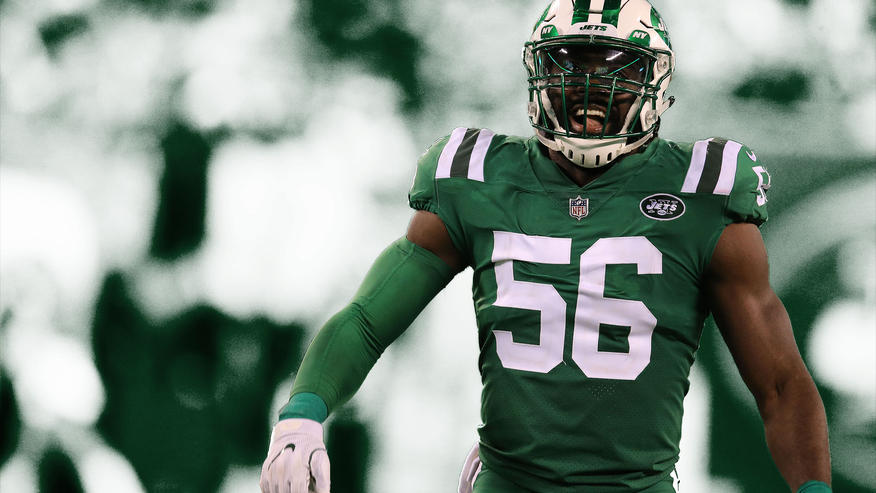 Demario Davis has had a solid career but this past season was by far the best season he has put together. Pro Football Focus ranked him as the eighth best linebacker in the league. He was the 10th best run defender, 20th best coverage linebacker and came in 15th place in pass rush ranking. Davis played a total of 1,115 snaps this season and he had his best season in every statistical category since he entered the league as a 23-year old rookie back in 2012. The Jets moved on from Davis just recently when they decided to sign 25-year old free agent Avery Williamson who was regarded as the top inside linebacker by many.

Davis just turned 29 and if this past season was any indication he likely has a lot of high-quality football left in the tank. Can he lead your defense? Yes. Davis has the familiarity playing in Todd Bowles and Rex Ryan’s 3-4 defensive scheme. The Rams, of course, are looking to find inside backers to fill the void in that area and Davis would be a solid option. Spotrac has his market value hovering around the five million dollars per year mark. A market value contract is said to be 3 years and $15,376,212 according to Spotrac.

If the Rams are looking for a low-risk and moderate reward player in his prime and likely mid-tier price point, they should definitely sign Demario Davis. Davis has the experience playing an extreme amount of snaps and doing a little bit of everything. The Rams had Alec Ogletree and Mark Barron last year starting inside and it’s worth noting that Davis ousted them in every category according to Pro Football Focus. The Jets were reportedly trying re-up Davis two days ago but now that Williamson is a Jet you can likely assume Davis is a free agent. 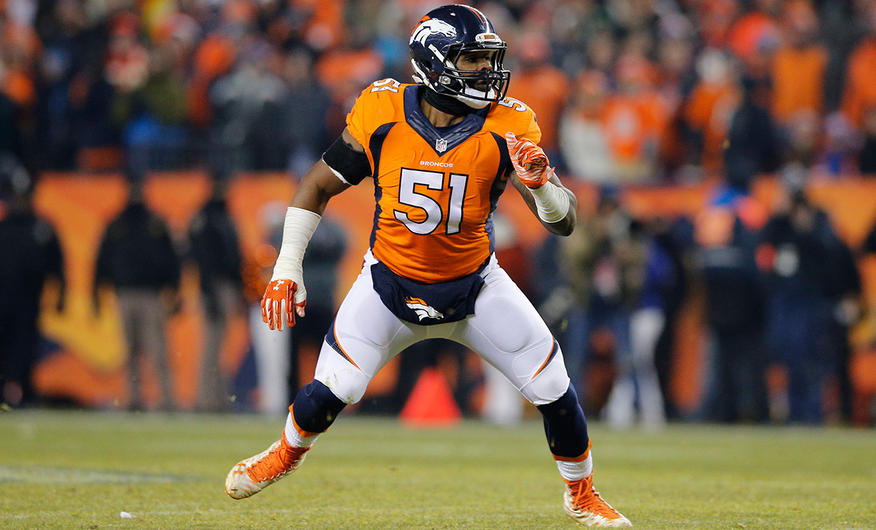 Todd Davis is a former Wade Phillips coached the guy that stayed in his starting slot even when the new regime under Head coach Vance Joseph went underway. Davis put together a solid year but he didn’t play as well as his first starting season under coach Phillips. Davis was ranked the 54th best linebacker in the league by Pro Football Focus which isn’t exactly a huge upgrade on paper to what the Rams had and quite honestly, Davis is probably not as good of a linebacker as Barron or Ogletree but you know why Davis is probably the more valuable player? His familiarity with Phillips, his scheme, his defense and the experience he had playing among a top-notch defense.

Davis will turn just 26 in May and has plenty of growth and tons of football that’s left to be played. Phillips has already brought in Kayvon Webster, Connor Barwin and Aqib Talib as three players that have previously played under him, so there is no legitimate reason to expect the Rams to look past signing another Wade guy. Davis was re-signed last season to a one-year deal worth almost three million dollars. So, seeing as he is turning just 26 and is a starter on a good defense that is an outstanding run defender, you could make the argument Todd sees as much money, if not more than Demario is projected to above. Pro Football Focus ranked Davis 15th as a run defensive linebacker, 20th in pass rush and 54th in coverage. The Rams would be taking a hit in coverage but make no mistake Davis would be a severe upgrade in the run defense department.

The Broncos lost Corey Nelson who was slated to potentially take over in case the team lost Todd Davis in the off-season but now it appears that Denver has shifted their focus to re-signing and bringing back Davis. Free agency will start soon so they will be looking to get a deal done that comes down to the wire. However, if Davis had to choose between the Broncos and the Rams with Wade Phillips, Aqib Talib, Kayvon Webster and likely a better chance of winning and playing in meaningful games, you would have to imagine he would probably choose the Rams. After all. Davis would not have to battle for any job, if the Rams signed Davis he would be the starting inside linebacker moving forward.

Who ends up a Ram? 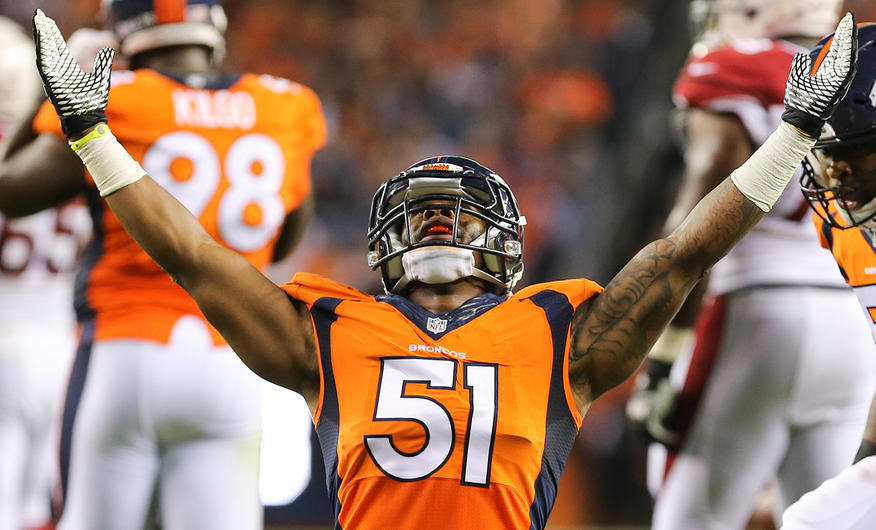 It seems like the most obvious choice when you factor in this is one of two players on the list that has prior experience with one of the coaches on the Rams coaching staff. When you also factor in that it’s Wade Phillips who Todd Davis won a Super Bowl with that also changes things. Look, I could see the Rams grabbing another linebacker and crazy enough I would actually pick NaVorro Bowman. Bowman and both Davis’ will have the most reasonable price tags and that’s one of the reasons I suspect the Rams who will likely fall just above $30 million in cap after they release Tavon Austin, will need to go with the lowly priced linebacker.

Sportsline.com actually has the Rams as heavy 3/1 favorites in landing the 25-year old linebacker. The Rams have a need at the position and Davis likely knows it’s best to be in the same building as Phillips and move onto start for an up-and-coming franchise.