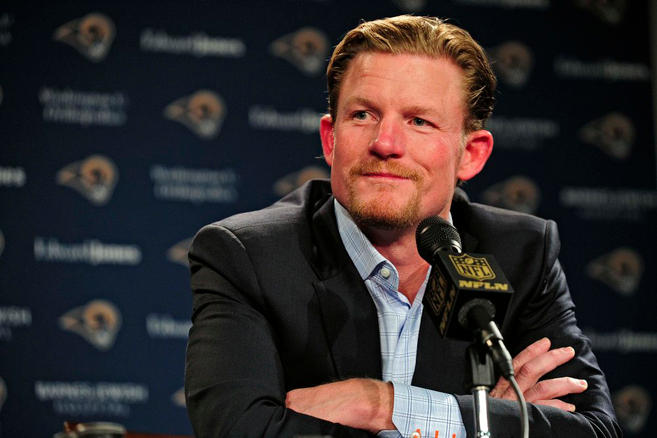 With the NFL Combine starting up this week and free agency right around the corner, Rams fans are getting hyped for the offseason.  The Rams front office gave us an early taste as they made a huge trade to acquire cornerback Marcus Peters from the Kansas City Chiefs.  It is being reported that the Rams traded a 4th round pick in 2018 and a 2nd round pick in 2019 for Marcus Peters and a 2018 6th round pick from the Chiefs.  Which appears to be an absolute steal and an astronomical win for the front office.  With the Rams making moves now and in the future, and the future signings and releases that are on the way, many fans will have strong opinions on certain moves. No matter what moves the Rams make, I believe Sean McVay and Les Snead have earned respect from the fan-base and deserve the benefit of the doubt.

If you are a long time Rams fan you have been subject to so many failed draft picks and free agent signings that you have been lulled into a pessimistic mindset for just about every offseason.  Whether you second guessed the past regimes acquisitions or if they gave you a false sense of hope just to produce a highly disappointing season, I understand why it would be difficult to put your trust back into the team after just one good season but this new regime is no joke.  Many of the decisions they made last year were criticized by fans and media alike, but they proved to everyone that they know players and understand how to fill the holes in their roster.  Here is a recap of the acquisitions they made last year.

Some of the first moves that McVay made when he became coach was to cut players that he believed did not fit his scheme or he thought he could upgrade.  Lance Kendricks was always talked about by the Fisher regime as a tight end that was on the cusp of breaking out.  Well that never really happened.  He moved on to Green Bay where he really wasn’t heard of again, only recording 18 receptions for 203 yards.  Tim Barnes, the revolving door of our offensive line, was also cut.  Although Barnes showed toughness and passion at times, which was admirable, his play on the line was terrible.  He went on to sign with the 49ers.  Eugene Sims was brought over by Jeff Fisher and left with Fisher.  Sims was a really good backup defensive end who just didn’t fit in with the new defensive scheme.

William Hayes, who made himself famous with his lack of belief in dinosaurs on Hard Knocks, was traded to the Miami Dolphins for a 6th round pick.  Hayes was a great depth guy for Fishers team, but like Sims, did not fit Wade Phillips scheme.  Hayes only recorded 1 sack with the Dolphins.

Did not resign Kenny Britt:

Maybe one of the biggest offseason wins was that the Rams did not resign Kenny Britt.  After posting the first 1,000 yard season for a Rams wide receiver since 2007, many fans wanted Kenny Britt back.  McVay did not.  Britt moved on to the Browns where he got a 4 year, $32.5 million dollar contract with $10.5 million guaranteed.  He was then released the same year.

Andrew Whitworth:  At age 35, Whitworth was viewed by many as a left tackle that was too old and would be a waste of money as his play would certainly decline.  This year he responded by being a top 10 Left Tackle in the league and took the Rams terrible offensive line and turned it into one of the best in the league. This helped Goff take a huge leap in his second year by providing him with solid protection.  By the end of the year Andrew Whitworth was a common name as one of the most important offseason signings by any team in 2017.

John Sullivan: John Sullivan came over from the Washington Redskins with Sean McVay and was instantly bashed for being old and having an injury history.  He came in and gave the Rams the best center play they have seen in years and did so making very little money.  Sullivan played as a top 15 center for the season and at times played as a top 10.

Robert Woods:  Robert Woods may have been the most criticized addition to the Rams.  Buffalo fans were mocking us, Rams fans were angry about the money he was getting paid, the media was not high on the Rams picking him up.  Many people wanted Kenny Britt over Woods. Robert Woods proved everyone wrong and he came in and became the Rams’ number one receiver.  He only played in 12 games this year and produced 781 yards, but was on pace for over 1000 yards if he played all 16 games. Goff had amazing chemistry with Woods as he had a passer rating of 114.9 on passes to Woods which ranked third-highest among all quarterback to receiver connections. The price the Rams are paying Robert Woods turns out to be a complete steal.

Nickell Robey-Coleman:  The fact that the Rams got NRC for practically nothing was a steal in itself.  He played as a top nickel corner in the league and when the injury bug hit the secondary he stepped in and played well.  Coleman recorded 9 pass breakups, 2 interceptions and 1 forced fumble. There was not a lot of blow back for this addition as he was cheap and young but the fact that the Rams front office went out and grabbed him while other teams sat on their hands shows that they recognize talent.

2nd round-Gerald Everett: Who the hell is Gerald Everett?  This was probably one of the main questions being asked by Rams fans after this pick.  Everett, a tight end from South Alabama, came in and made a handful of big plays that made the fan base go, “Oh that’s why we drafted him.”  He definitely didn’t have a consistent season but he did show flashes.  Typically tight ends do not come in and blow up the league as a rookie so the verdict is still out on this one.  At the very least the Rams got a solid TE that can be a productive receiving option for the offense.

3rd round-Cooper Kupp:  Cooper Kupp is slow and showed that at the combine.  Many teams dropped him down the boards because of it.  Les Snead loved it.  He knew Kupp was going to be a great player and a complete steal in the 3rd round.  Sure he ran a slow 40 time but his understanding of the game and route running ability makes up for his lack of speed.  The Rams knew he was a home run hit from the beginning which shows their ability to evaluate talent and not get sucked in by things like 40 yard dash times.  Kupp was the most productive rookie wide receiver in the league this year.

3rd round: John Johnson:  Johnson may have been one of the most disrespected of all of the Rams draft picks.  Many people saw him as a 6th round pick and were bashing the Rams for wasting the pick.  Johnson proved the Rams were right to draft him when they did as he was one of the best safeties in the league.  Pro Football Focus had him ranked as the number 2 rookie safety in the league.

The Rams currently have 13 unrestricted free agents, 3 restricted free agents, and 6 exclusive rights free agents.  With so many moves that are about to be made, it is important for Rams fans to remember what happened last year and realize that the Rams culture has changed.  This regime has brought with it a winning culture and has proven that it knows how to improve the team.  Even if you do not agree with some of the moves they are about to make, keep in mind the amazing job they did last year and give them the benefit of the doubt.  They sure did earn it.