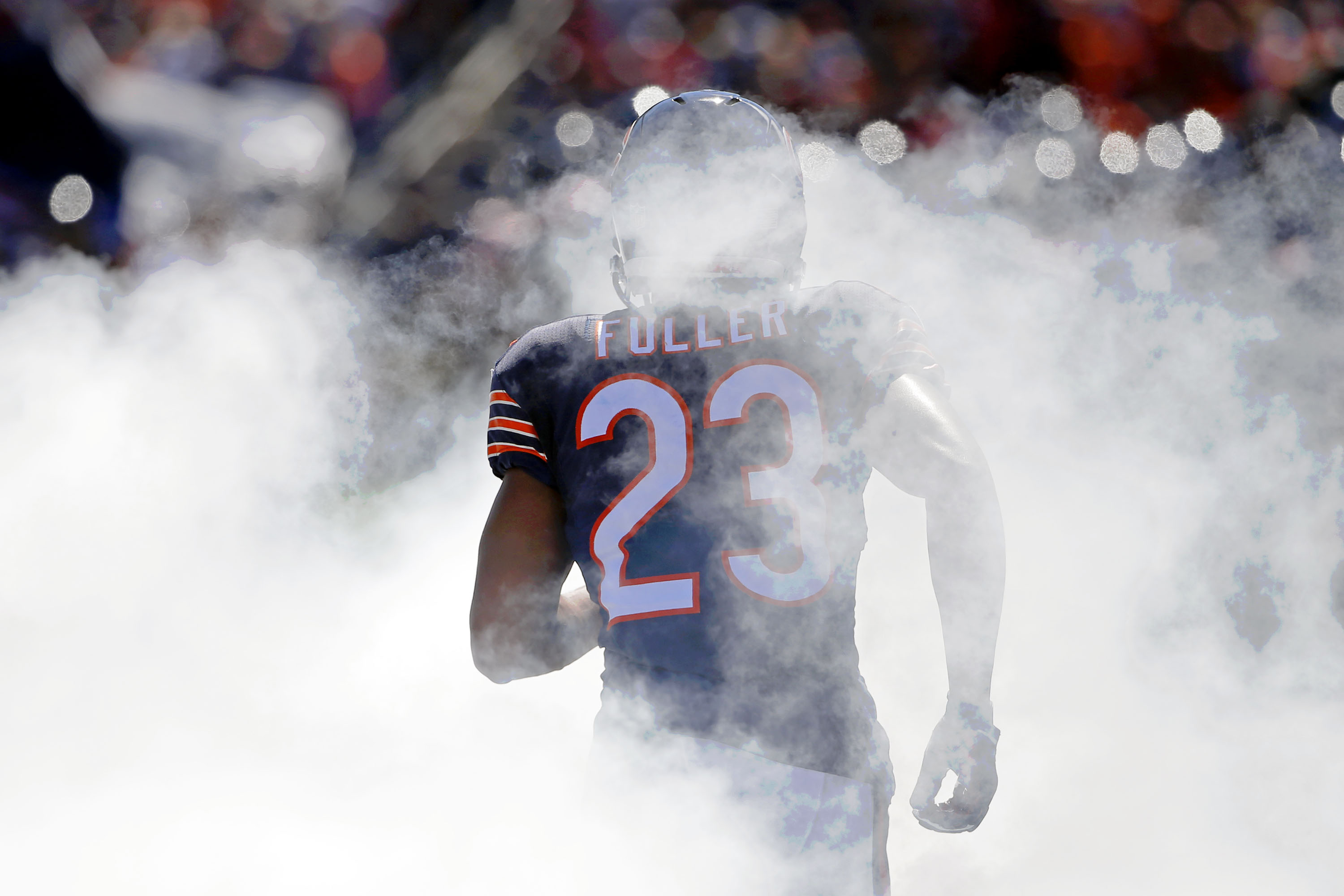 I gave you the first dose of my free agency predictions earlier with this article on the top offensive players. Now, I move over to the defense. 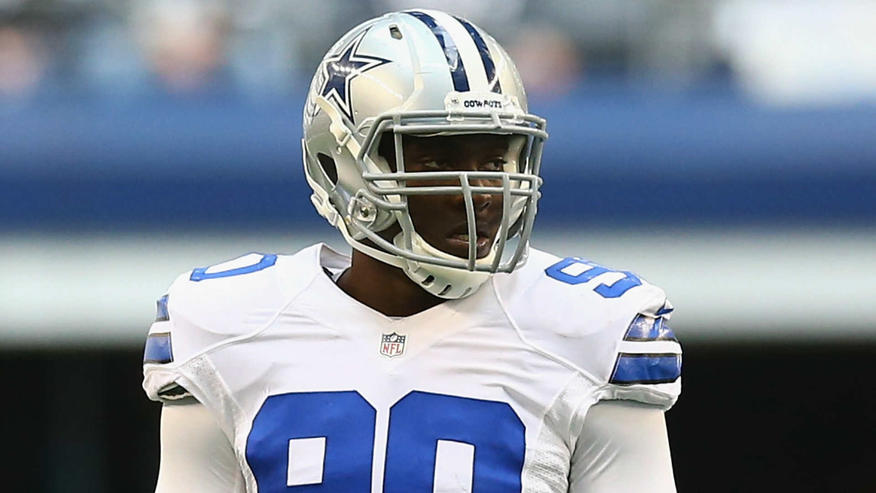 Explanation: DeMarcus Lawrence is only 25 years of age and just had an elite season in one of the weaker pass rush free agent classes. He’s going to be paid big time, but the Cowboys need to get their bearings and tag him first and foremost. Lawrence is already expected to be tagged by Dallas according to multiple reports.

Explanation: Ezekiel Ansah is rumored to not be a fit for the Lions new scheme under Matt Patricia. The Colts are a team with a lot of cap that will pursue these free agents hard. Ansah struggled to start the year but finished strong and is in a weak class that was even made weaker because of Lawrence being tagged.

Explanation: Kony Ealy and the Jets have mutual interest to get a deal done. The Jets have no interest in letting Ealy go when they have as much cap space as they do. He was a gift last off-season, the Patriots traded a second-round pick for him and waived him. The Jets can’t afford to just let someone like that leave.

Explanation: Alex Okafor received the starting job for New Orleans and was great during his time this season. The only issue is that he went down with an injury. He only signed a one-year deal but I expect him to re-sign with the Saints. 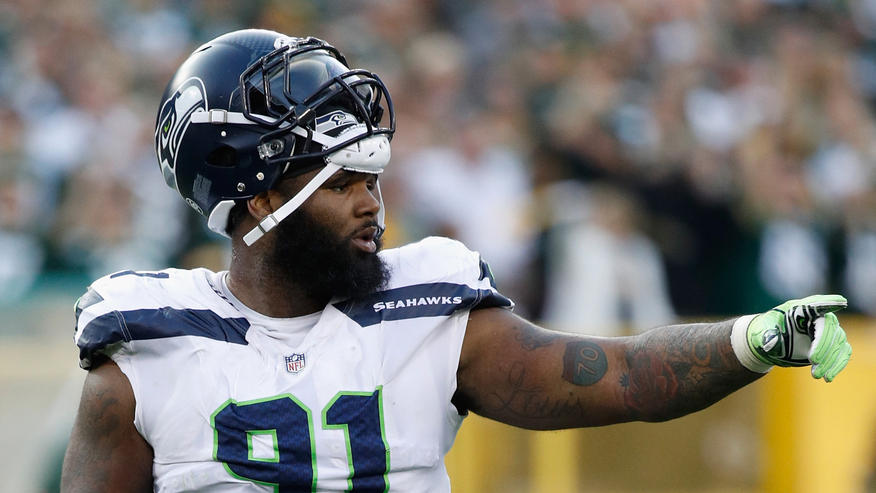 Explanation: I don’t think the Seahawks have a chance of signing Richardson unless they tag him. I think the Falcons are a perfect scheme fit next to Grady Jarrett and I think that the Falcons will replace Dontari Poe.

Explanation: The Buccaneers are expected to part with defensive tackle Chris Baker and Lotulelei is likely out of Carolina. It’s a good fit overall putting him next to Gerald McCoy. The Bucs have space and the Panthers can’t wait to try out first-round pick Vernon Butler with Lotulelei’s departure.

Explanation: It was discussed last year whether or not Poe would leave and reunite with Chris Ballard in Indy. I didn’t buy it because I felt like Poe was staying in Kansas City. That didn’t happen, and Poe went to Atlanta one a one-year deal but now I expect the Colts and Ballard to bring in Poe and replace at Al Woods at nose tackle. 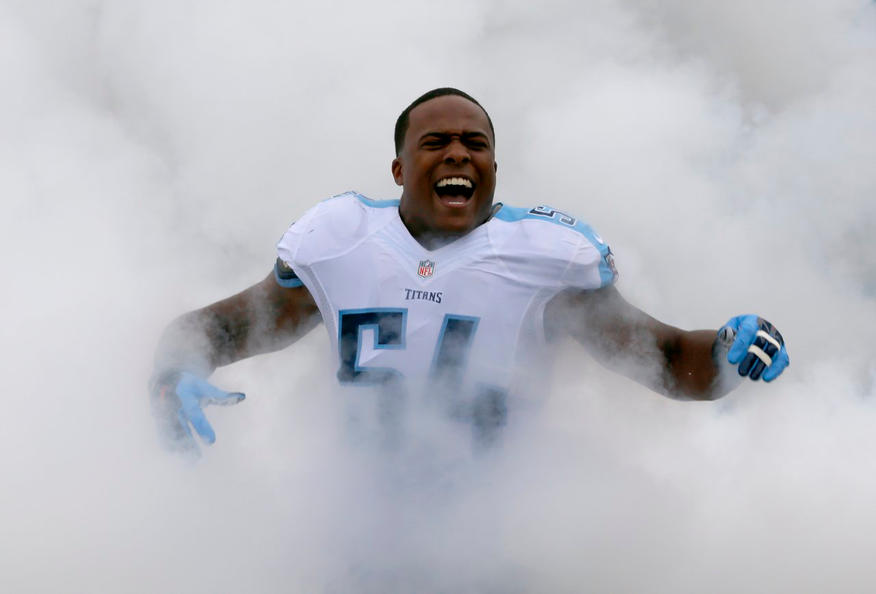 Explanation: There is a good chance that the best linebacker on the market or at least the most valuable is the most underrated. No one is talking about the 25-year old linebacker that is coming off a Pro Bowl caliber season. Williamson might be a great fit for the Steelers after playing under Dick LeBeau and with the injury to Ryan Shazier but I fully expect the Titans to step up to the plate and pay Williamson. A better way to put it, I don’t see a former linebacker who is now the Head coach in Mike Vrabel willing to part with his best linebacker on the roster for no reason whatsoever.

Explanation: Preston Brown wants to stay with the Bills and the Bills likely want to keep him in Buffalo. At 25, there is still plenty of potential left for an already very good player in Brown. Could he leave? Sure, but I would most likely bet on him staying in western New York.

Explanation: Tahir Whitehead could come back to Detroit but I expect him to go to where he gets paid the most. This is likely going to be the last chance for Whitehead to nab a long-term deal and the Saints provide the ability to lead a team in the middle of the defense, a good defense at that and an overall good team that wasn’t far from the NFC title game. No, I don’t think Craig Robertson, A.J. Klein and Manti Te’o is enough. Whitehead can really help bolster that linebacker core.

Explanation: The Giants would be the perfect fit for Anthony Hitchens but they won’t be able to outbid the Colts. Sure, the Cowboys will want Hitchens back but in the end, he goes and reunites with Matt Eberflus who left the Cowboys to become Defensive coordinator in Indianapolis. The Colts have tons of money to spend and should probably use most of it on repairing that defense. The linebackers could use a major upgrade and luckily you don’t end up having to take out a mortgage on a 25-year old LB, because Hitchens is a total value pickup.

Explanation: The Eagles cannot afford to let Bradham leave in free agency. The reigning Super Bowl champions will have a rough time fitting him under the cap but with some wiggle room the Eagles can make it happen and I expect they will.

Explanation: Demario Davis took almost a three million dollar pay cut before the season started to stay with the Jets. He responded by having a huge season and now he’s definitely in the Jets plans. Again, lots of cap space and value? I don’t see Davis leaving New York.

Explanation: Bowman was cut like he didn’t matter but the Raiders didn’t care. They scooped him up and he had a great year. With Jon Gruden now in command, I would expect Bowman to retained for sure. 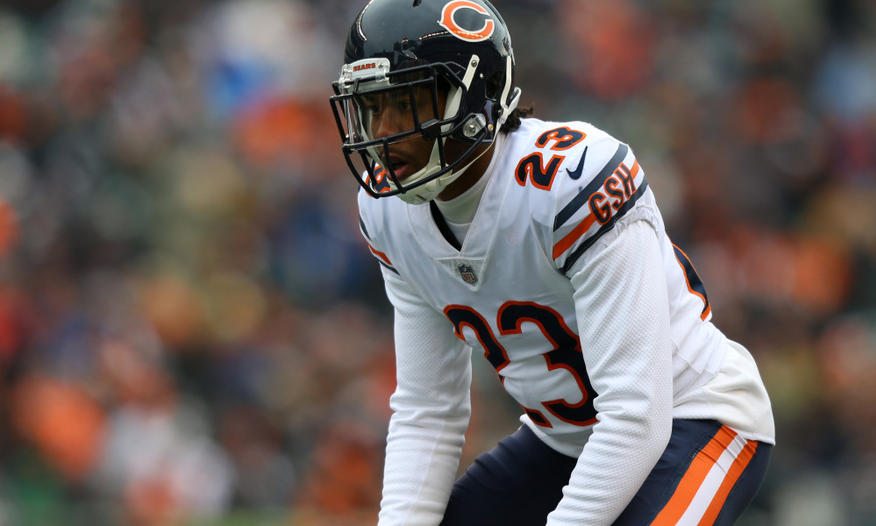 Explanation: I could see the Bears not tagging Fuller and letting him test free agency but the Bears know he is a goner if he gets out on the open market. Teams like the Chiefs who could pair him with his brother Kendall, the Colts who have a lot of cap space, the Browns, the 49ers and even more teams could make a run at Fuller. Vic Fangio stayed as Defensive coordinator, you cannot afford to let Fuller leave now. Bears tag Fuller for sure.

Explanation: Look, Malcolm Butler is way more than just an interception in the Super Bowl. He’s surprisingly been underrated since doing that and this year he was disrespected after the Patriots decided to not only avoid paying Butler but sign a free agent to a big contract in what was seemingly replacing Butler. The Packers just made a fantastic hire of Defensive coordinator Mike Pettine, he is going to need to really turn this defense around and that will certainly require a lockdown on-an-island cornerback like Butler. Ted Thompson is no longer the General manager and you may actually see a Green Bay splash this season. It’s a good fit for both parties involved.

Explanation: Jon Gruden has always spoken highly of Trumaine Johnson when he has covered the Rams on ESPN Monday Night football. I think the Raiders have some nice secondary pieces in the form of Karl Joseph, Obi Melifonwu and Gareon Conley but the Raiders lack another true corner next to Conley. With T.J. Carrie hitting free agency and Sean Smith completely underachieving I expect Johnson to stay in the west coast and sign with the Raiders. Johnson wants to come back to the Rams but it appears the Rams are ready to move on from him according to a report from Jason La Canfora.

Explanation: E.J. Gaines has been a really good cornerback in his career but his problem has been injuries. The 25-year old is likely going to leave Buffalo. I think his best fit is with the Titans. The team is already talented, they have the cap space and really can use Gaines to tune up the secondary. Gaines offers the versatility to play inside or outside with Logan Ryan and Adoree Jackson so he will fit in like a glove. Gaines with his age and his production when healthy makes him perhaps the most interesting free agent cornerback available.

Explanation: This is the NFL mercenary of the league. Prince Amukamara signs another one-year deal and joins a struggling Texans secondary.

Explanation: The Bucs are going to need to get younger at the cornerback position. Brent Grimes is 34 years old and is a free agent. Breeland is a nice piece that comes at a do-able cost and can join forces with Vernon Hargreaves III who Tampa Bay is hoping to develop into a star.

Explanation: The Eagles have one of the best General managers in the business. Howie Roseman who will be able to clear enough space to bring back breakout CB Robinson.

Explanation: T.J. Carrie just came off the best season of his career and it can not be understated. He will likely command at least five million annually and this could be one of the reasons the Rams decide to let Johnson walk in free agency. I think Carrie being a year younger, having an arguably more productive season and of course, being cheaper. It makes it obvious the Rams would go this route and acquire another CB via the draft.

Explanation: Arguably one of the best nickel cornerbacks in the league had himself a year for the Rams. The Rams are already expected to lose Trumaine Johnson, but that doesn’t mean they are clearing house. I expect the Rams to give Robey-Coleman top nickel cornerback money. 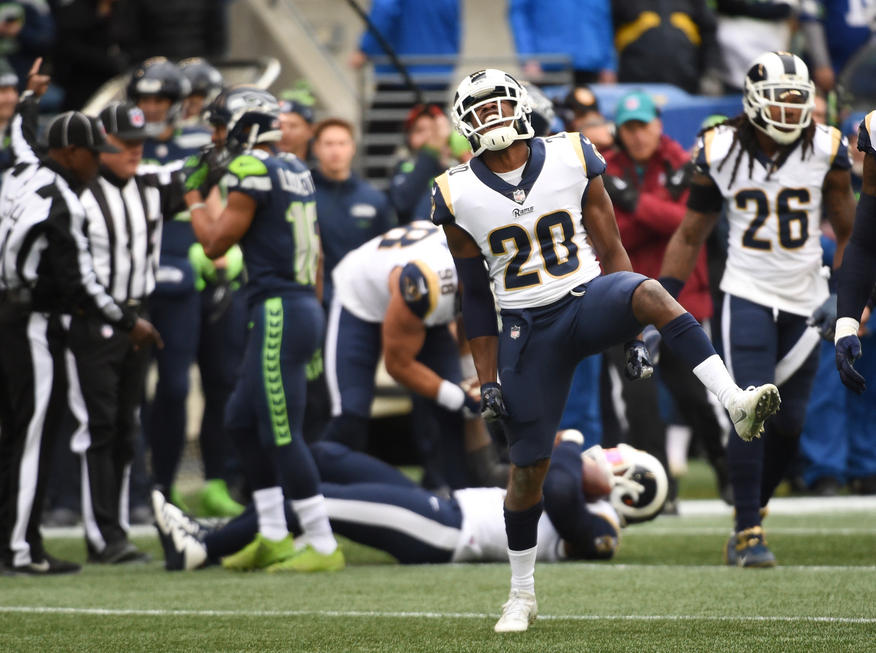 Explanation: It’s a no-brainer for the Rams to tag LaMarcus Joyner to be really honest. The 27-year old has a market value just below what he would get from the franchise tag so the Rams can tag him and work on a long-term deal. I think that’s exactly what is bound to happen, the Rams are going to tag and then extend Joyner for five more years. This was the one Ram that didn’t have his return in question. He basically started one season at the position and overnight became a superstar. You sign guys like that before they hit free agency.

Explanation: The Chargers struck gold with a one-year deal. Boston is going to get paid, he wants to stay in L.A. and the Chargers luckily have them money to make that happen.

Explanation: Eric Reid could come back but he’s likely gone from the 49ers. The Buccaneers drafted Justin Evans last year and will need another safety to play alongside him due to the fact that Chris Conte simply isn’t a starter at this level and T.J. Ward is a free agent. Reid’s versatility next to Evans would allow the Buccaneers to finally patch up that secondary a bit.

Explanation: I don’t see the Packers paying Burnett long-term after they invested a high pick on Josh Jones. I don’t care how behind Jones might be, you cannot justify paying Burnett for four more years. Burnett definitely fits with the Texans and would instantly be their best safety to help in the backend of the secondary.

Explanation: I don’t believe Melifonwu is ready to start at safety or corner for that matter, so let’s bring Tyvon Branch back to Oakland and pay him for one year while Melifonwu grows into that role. Branch continues to play at a high level and the secondary I just predicted for the Raiders is starting to look scary.

Explanation: The Saints move on from Kenny Vaccaro and add an upgrade over Vonn Bell. McDougald was forced to play more snaps than he expected when Kam Chancellor & Earl Thomas went down with injuries during the season. He’s not your top guy or your second guy but McDougald is a good player that works especially for the value. If the Saints can use his services for two years and then find their guy of the future next to Marcus Williams that would be a mission accomplished.