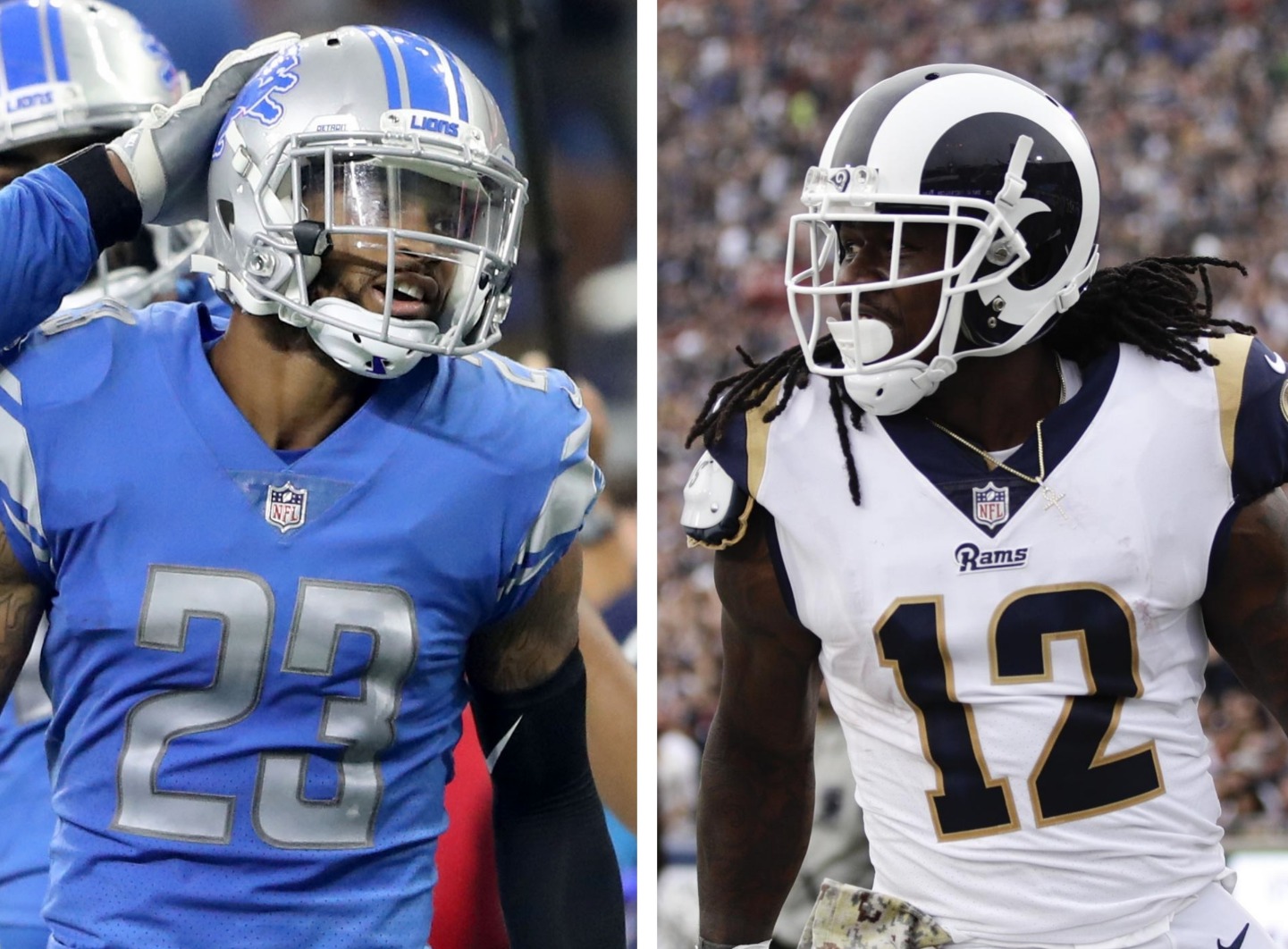 It’s that time of year, now we are going to talk about all of the off-season possibilities and such. Recently on the brand new episode of the Downtown Rams Podcast (which you can find here) Joe Curley and I discussed the possibility of trading Sammy Watkins for Darius Slay. Now, it’s time to take a look at the potential trade.

Darius Slay just had a monster season and Sammy Watkins had an underwhelming season for many, so why would this be a reasonable trade? Well, the Lions are likely the favorite to land impending Free Agent CB Malcolm Butler and besides that, they are going through a regime change as the team will now be in command of Head coach Matt Patricia. It’s uncertain if Slay will fit Patricia’s defense and with the amount, the Lions will have to pay Butler it may not make too much sense to spend more money on the position. Besides that fact, the Lions have Quandre Diggs, D.J. Hayden (UFA), Nevin Lawson (UFA), Jamal Agnew, Jalen Tabor & Des Lawrence on the roster. Tabor is a high pick, Diggs and Lawson are good cornerbacks, add Butler to that team and the Lions can trade a surplus to gain in another area.

That surplus would mean trading Slay for Rams impending Free Agent WR Sammy Watkins. The Rams are likely going to hurt themselves if they re-sign Watkins as they will probably have to move on from Trumaine Johnson or even LaMarcus Joyner. Instead of worrying about the draft and free agency, the Rams trade Watkins to the Lions and acquire Slay to either be a standalone starter or pair with Johnson to form a dynamic duo of cornerbacks. Sure, Slay’s production outweigh’s what Watkins did, but Watkins is 24 years old at the moment and oozing with talent and potential. Sure, the Lions recently signed Marvin Jones and Golden Tate on top of drafting Kenny Golladay for the receiver position but the Lions do have an out this season in Tate’s deal if they choose to take it and Jones’ potential out is after the 2018 season. Also, Tate is 29 years old and Jones is 27 and has shown way too much inconsistency. Watkins is again, 24 years old and is only going to get better. He is probably the type of receiver that wants to be the guy and with Matthew Stafford he would be the guy. Stafford has lacked that consistent deep threat since Calvin Johnson retired from the NFL. He would finally have that alongside Golladay for the future. The Lions could easily part with Jones after the season and keep Tate to man the slot.

Slay is already under contract but it’s very affordable for his play and his age (27 years old). Slay is signed until the 2021 off-season which would give the Rams the ability to choose whether or not to move on with him or not when he was 30 years of age. There is a lot of balance that works with this trade, no one gives up any draft capital, the Rams get something from their big investment that cost them a top 15 CB and a second-round pick and the Lions make a big PR move to show the fans that this is a new era in Detroit. Everyone ends up happy, sure, the ideal scenario is to trade Watkins to the AFC but this is a really good fit for both teams. I think if this deal were to happen you might have to keep Johnson to play with Slay. That whole idea of having two number one cornerbacks seems to be the way the league is trending now with Aqib Talib & Chris Harris Jr., Jalen Ramsey & A.J. Bouye and the brand new duo of Marcus Peters & Kendall Fuller. If the Rams paired Slay and Johnson it would be right back to how it used to be with Johnson and Janoris Jenkins.

So, now, with the Rams parting with Watkins what would be the likely scenario to replace him you ask? First off, the Rams drafted a second-round TE Gerald Everett who will likely be used a lot more in round two and a fourth-round WR Josh Reynolds who is likely to be the next guy in line behind Watkins. Even so, the Rams could easily grab a WR in this draft class that can stretch the field like Watkins does, the Rams could bring in another Pettis, Dante Pettis, D.J. Chark or someone like Auden Tate via the draft. Bear in mind, if the Rams were to acquire Slay and keep Johnson while also re-signing Joyner and not trading or cutting Barron, they would be free to spend their draft capital on a wideout.

How the contracts stack up per Spotrac:

Overall, it makes a lot of sense, obviously, Watkins is going to command more than that, but in reality, I think the Rams might franchise tag him and trade him. That would be the best bet for the Lions. The Rams could decide to use Slay as the guy at CB and feel confident in Troy Hill to play alongside him and then draft someone, moving on from Johnson altogether. It would save cap space and fill a need that is expected. Not many expect Johnson to be brought back, but many do believe it is the right move to do so. The Rams already lost the Watkins trade to the Bills but they can salvage what’s left and grab a Pro Bowl level CB and move forward with the ability to sign their own free agents if they play this right. This is not a knock on Watkins because to a degree, it wasn’t his fault his numbers were down and he’s going to want way more than his market value. One thing that was huge for Watkins was his ability to stay healthy all year long which was the biggest red flag with signing Watkins long-term. In the end, if the Rams decide to sign Watkins long-term for the right price in the range of 10-12 million annually I won’t be against that, but I will be against the idea of signing Watkins for 15-17 million annually and losing possibly both of Joyner and Johnson. Watkins was an add-on, you don’t want to make his acquisition cause you to become vulnerable in other positional areas because of the money you had to spend on him.