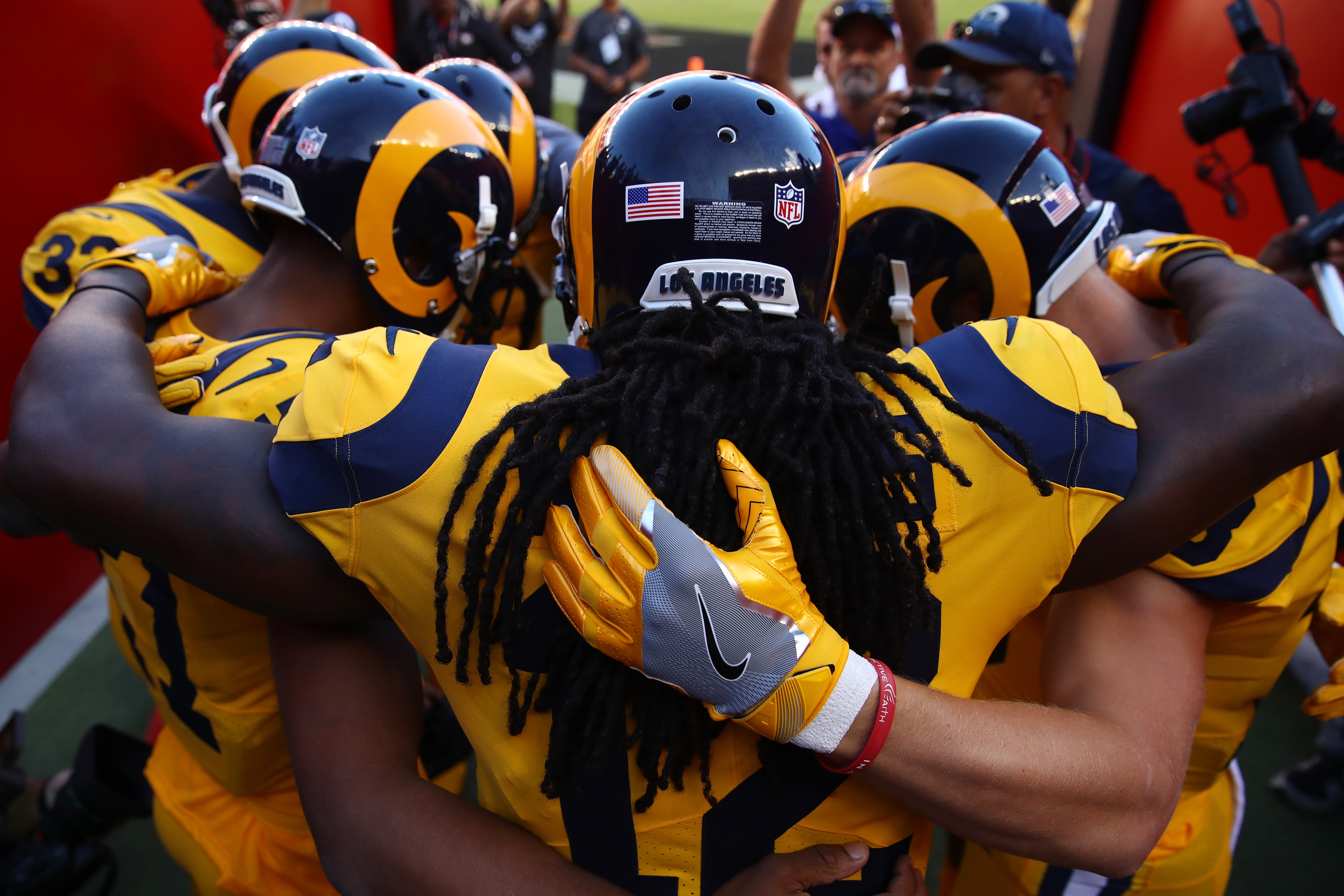 The offseason is under way and moves are already being made by teams.  Jimmy Garrapolo just signed a new mega deal making him the highest paid player in the league. (Lets hope that backfires on them.) The Redskins traded for Alex Smith, ensuring Kirk Cousins is going else-where.  So what do the Rams need to do this offseason to make a push for the Super Bowl? Here is the perfect offseason for the Rams that will help them get to the promised land.

In a perfect Rams offseason, they would not have to release players to increase cap space.  There are trade partners who would like to kick the tires on these players.

Robert Quinn: Gets traded to Tampa Bay for 3rd round pick (69).  Tampa Bay is in need of better edge rushers and they make a move to get a veteran who has the ability to dominate.  This saves the Rams 12.5 mil.

Tavon Austin: The Rams jumped the New York Jets to select Tavon Austin in the 2013 NFL Draft.  The Jets still like him and have the cap space to take on his 8 Million dollar cap hit.  The Rams receive a 7th round pick (209) and save 8 mil.

Mark Barron: The Browns are looking to bring themselves up to some form of respectability.  Greg Williams gets a familiar face for his defensive unit and the Rams get a 5th round pick (150) and save 10 mil

One of the keys to having a good NFL team is to restrict the amount of turnover on the roster.  For that purpose the Rams focus mainly on resigning their own free agents.

Aaron Donald:  Donald finally gets his mega deal and costs the rams 20 million against the cap this year.  He was already due about 6.5 million so this is only an increase of 13.5 million.

Sammy Watkins: This one is highly unlikely at this price but in a perfect offseason for the Rams this is what would happen.  Watkins realizes that he isn’t going to get paid 15 million because of his injury history and lack of production last year.  He sees the Rams as an upcoming team and wants to stay with them and decides to take a discount for a 2 year deal, 10 million a year.

Trumaine Johnson: Trumaine Johnson played really well for the Rams this year and takes a slight discount to stay with them.  He signs a 4 year, 14 million a year contract.

Lamarcus Joyner: Joyner proved to be one of the best safeties in the league and the Rams agree.  He hauls in a huge contract at 4 years 9 million a year.

Cody Davis:  The Rams resign Davis who played well when needed as a backup safety and is a special team ace.  The Rams get him for 1.5 million a year.

Jake McQuaide: Long snapper is not a premier position thus does not need to be paid a crazy amount.  The Rams keep McQuaide for 1 million a year.

OLB Alex Okafor: Coming off of a torn Achilles, the Rams get a deal for Okafor and he comes in and replaces Robert Quinn.  He costs them 8 million a year.

ILB Todd Davis: Wade Phillips gets a Linebacker he is familiar with in Davis.  Davis jumps ship from whatever is going on in Denver to an up and coming team in the Rams.  He costs them about 4.5 million a year.

R2: p35 – OT Orlando Brown, Oklahoma:  The Rams get their future Left Tackle in Brown. He is a monster of a man who has football in his blood as his father played in the NFL for 11 seasons.  His height can sometimes work against him for leverage but his size and skill are too good to pass up. Whitworth will hold down the Left Tackle spot so for now Brown will move to the right side sliding Havenstein inside to RG and Jamon Brown becomes a great depth piece.

R2: p64 – OLB Dorance Armstrong JR, Kansas: Armstrong is a fast edge rusher and has an excellent skill set. He was hindered by a bad surrounding team so his production was limited but that allows the Rams to get great value and choose him at the end of the 2nd round.  Armstrong comes in opposite of Okafor to cement the Rams’ edge presence.

R3:p69 –  CB Tavarus McFadden, Florida State: McFadden is a 6-2, 200 lb corner who has the frame to play press against big wide receivers in the NFL. He also has great ball skills and is good at tracking the ball.  He was seen as one of the top corners at the beginning of the year but had an up and down season which has hurt his stock. With Kayvon Webster coming off of an injury riddled year, the Rams get a player to play opposite of Trumaine Johnson.  This moves Webster back as the third Corner on the team giving the Rams greater depth.

R3: p87 – C Frank Ragnow, Arkansas:  The Rams are in need of a top Center in the draft and they get one in Frank Ragnow.  Ragnow is a big center at 6’ 5’’ and shows good athleticism in space and has versatility as a guard.  Ragnow was injured for a good part of this last season with a high ankle sprain which has him dropping to the 3rd round for the Rams.

R4: p100 – EDGE, Uchenna Nwosu, USC: Nwosu adds depth to the Rams OLB position.  He possesses good burst and speed off the line and has experience dropping into coverage with 19 passes defended in the past 2 seasons.  He needs to work on his strength and ability to get off of blocks.

R5: p151 – DT, Nathan Shepherd, Fort Hays State: Shepherd completely dominated in senior bowl practices giving standout guard Will Hernandez fits.  Unfortunately he broke his hand before the game which hurt his stock enough for the Rams to scoop him up in the 5th round.

R6: p180 – DT BJ Hill, North Carolina State: Hill provides the Rams with a good depth as a DT.  Hill is 6-3, 320 lbs and was apart of the dominate defensive line in NC State. Hill dominated at the senior bowl and the Rams add depth to their d-line.

R6: p181 – S Godwin Igwebuike, Northwestern: Standing at 6 feet, Igwebuike has great size for a safety with good speed.  He is quick at diagnosing plays and has good tackling technique.

R6: p184 – RB Jaylen Samuels: Samuels is a swiss army knife as a RB.  He does not excel at to many things but is good at all of them.  He would come in and challenge Malcolm Brown as the backup to Todd Gurley.