Sean McVay Deserved to Win Coach of the Year 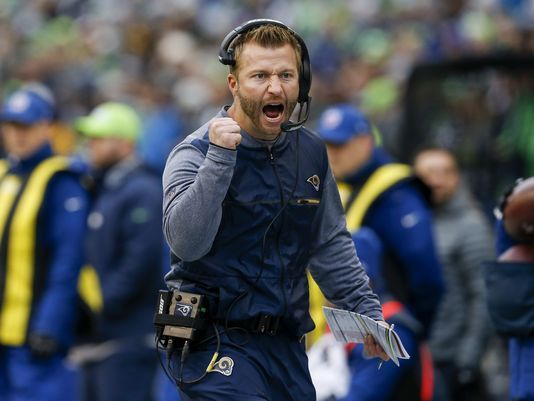 Last night at the NFL Award show, Sean McVay was named the NFL Coach of the year.  This came as no surprise to Rams fans as he completely turned around the losing culture that had plagued the rams since 2003. But other fanbases, particularly the Eagles fanbase, have been whining and complaining that it should have been Doug Pederson.  This has motivated me to show why McVay deserved it over all of the other candidates.

“Doug Pederson beat Sean McVay in a head to head!  How could he not win? He got robbed!” This is one of the most common arguments I have seen.  If a head to head decided who the Head Coach of the Year was going to be then this award would be meaningless.  It takes into account everything that the coach has accomplished over the course of the season.  One game will not decide the coach of the year.

That brings me to “The Eagles had a better record! And they are in the Super Bowl!”  Ok, ok one thing at a time!  The Eagles having a better record is not enough to overshadow the fact that McVay had taken a team that had not had a winning season since 2003 and not only won 11 games but won the division and took them to their first playoff game.  In fact if you look over the last 7 years only one coach who won Coach of the Year had the best record.  That was Ron Rivera in 2015.  That should give you an idea that winning Coach of the Year is not just about record and head to heads.

I know that, so far, I have focused on the Eagles fans but they have been by far the most vocal.  So let me give you a list of why Sean McVay won Coach of the Year.

When the Rams hired McVay there was backlash from coaches and media outlets alike that he was too young and that the Rams made a huge mistake.  Not only did he prove them wrong but he also took his team to the playoffs for the first time in 13 years in his first year of coaching.

Brought relevance to an irrelevant team:

The Rams were a joke of the league for over a decade.  They were mentioned in the same breath as the Browns.  Sean McVay came in and turned the entire franchise around in just one season.  The average projection for the rams to start the season was 6-10 and finishing 3rd in the division.  McVay took them to 11-5 and 1st in the division.  Oh and that was without a first round pick last year.

Took a “bust” Quarterback and made him a pro-bowler:

Last year Jared Goff was the joke of the league.  He was already labeled a bust and many pundits last offseason had the Rams looking for a new Quarterback this offseason.  Well not anymore.  Jared Goff just came off of the most productive seasons since Marc Bulger in 2006.

Took the worst scoring offense from last year and made them the best this year:

One of McVays biggest accomplishments was that he improved the offense tremendously.  Last year the Rams scoring offense was ranked 32nd in the league.  This year it was ranked 1st.  How often does that happen you might ask?  In the Super Bowl era it has NEVER happened.  In the history of the football it has only happened ONCE.  Let that sink in.

Made Todd Gurley and Aaron Donald offensive and defensive players of the year:  McVay wasn’t the only Ram to get recognized during the NFL award show.  Todd Gurley won the NFL Offensive Player of the Year and Aaron Donald won the Defensive player of the year.  When you watch the speeches both players gave you can see how much they respect and credit McVay for the seasons they had.  McVay has proven time and time again that he gets the most out of his players and this just shows that he can elevate even elite players.

I know that most Eagles, Patriots, and Jaguars fans think that their coach should be the Coach of the Year but the fact is that McVay made history this year, not once, but TWICE!  He elevated his team from a joke to a legitimate Playoff team all while being a first time head coach, the youngest head coach in NFL history, and not having a first round pick.  I would say he earned it.