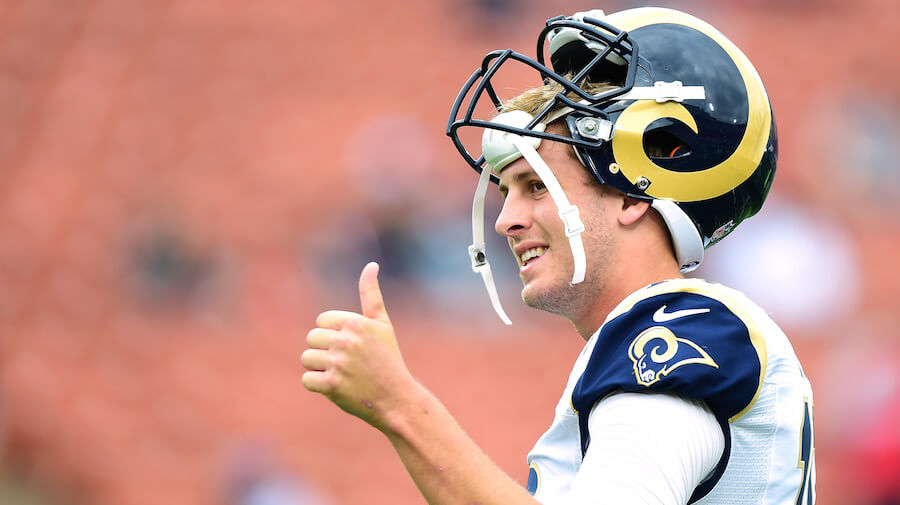 During the 2017 NFL season, Jared Goff made one of the biggest improvements by a quarterback in recent memory.  He went from being considered a guaranteed bust to a Pro-bowler in just one season.  In Goff’s rookie season he only started 7 games.  During those 7 games the offensive scheme was putrid, and some (like Todd Gurley) didn’t even consider it an NFL offense. On top of all of that, the coaching staff did a terrible job coaching up the team in general but specifically the offensive line and providing adequate wide receivers.

So that brings me to Goff’s second season, his first full season as a starter and being in a legit offense.  The chart below shows comparisons between Goff’s first year as a starter and the first years for Carson Wentz, Tom Brady, Peyton Manning, and Aaron Rodgers.

-Yards Per Completion: Goff had 8 yards per completion, the next closest to him was Aaron Rodgers at 7.5.

-Yards Per Game: Goff averaged 253.6 yards per game.  Again Aaron Rodgers was right on his coattails with 252.4.

-TD: There was a tie for the lead in TD’s but it was a tie for first so Goff got the nod here as well.  He tied Aaron Rodgers with 28 TD’s.

QBR: Goff’s QBR was maybe one of the most impressive stats as he had a total QBR of 100.5 with the next closest again being Aaron Rodgers at 93.8.

What you can take away from these stats is just how well Goff played this year.  He played as a top QB in the league and if McVay can continue providing a top offense (especially the offensive line) and have a solid defense for the next few years, Goff will grow into a QB that will have the ability to carry his team to the Super Bowl.