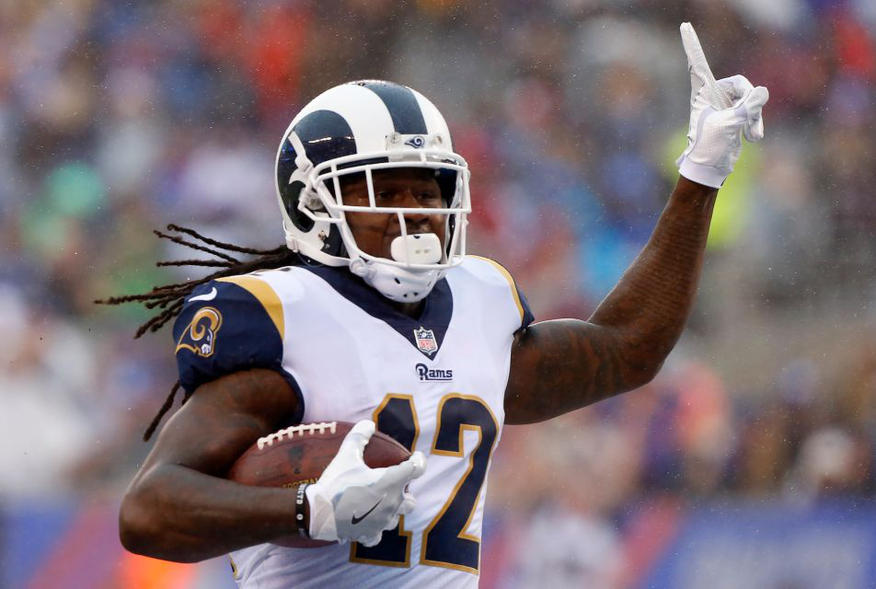 With the Super Bowl less than one week away, the NFL offseason is right around the corner. This means free agent frenzy and mock drafts are about to flood the internet.  I know that this title will rub some fans the wrong way but hear me out!  The Los Angeles Rams have a lot of difficult decisions coming this offseason with Trumaine Johnson, Sammy Watkins, Lamarcus Joyner, and Nickell Robey-Coleman being key Free Agents and the extension of Aaron Donald looming. At this point the Rams are projected to have about 50 million in salary cap.  Here are 6 reasons why I believe the Rams should move on from Sammy Watkins.

Watkins is a great receiver that has shown that he has the ability to be a top wide receiver in the league.  The problem is that he has been plagued with injuries throughout his short career and even though he stayed healthy this year, his injury history is still something to be weary of.  Watkins opened up the Rams offense this year providing Todd Gurley with less 8 man boxes simply by his presence and is set to make 15+ million dollars in free agency, either by signing a long term deal or by getting the franchise tag.  Although I do appreciate what Watkins provided the Rams this season I think that, with Sean McVay, the Rams can fill his spot with a cheaper option and still get the same, or close to the same result.

One of the biggest aspects of McVays offense is that he spreads the ball around a lot.  This means that there isn’t as much of a need for a prototypical #1 wide receiver.  McVay proved this year that he is one of the more dangerous offensive minds and I think opposing teams know that they cannot put 8 in the box or he will make them pay with or without Sammy Watkins.

3.) The Rams can replace the deep threat at a fraction of the cost

There are a lot of wide receivers that the rams could pursue to replace Watkins.  John Brown of Arizona, Paul Richardson of Seattle, Marqise Lee of Jacksonville or maybe even Martavis Bryant of Pittsburgh.  All three of these players would probably cost somewhere between 5-7 million a year and all of them offer a vertical threat.  That would free up 8-10 million for other signings.

4.) By not signing Watkins you can sign more impact players

In this article I am also assuming that the Rams move on from Tavon Austin, Robert Quinn, and Mark Barron.  Those three would give the Rams another 20 million to play with.  Add this to the 8-10 million saved from signing a receiver not named Watkins, that would give the Rams, let’s say, 29 million that they did not have before.  With that 29 million alone the Rams can resign Trumaine Johnson for 15 million, Nickell Robey-Coleman for 4 million, and Lamarcus Joyner for 9-10 million leaving the Rams with around 43 million.  With the remaining cap they can splurge and use it on Aqib Talib (or another top corner), maybe a Jordan Reed or Tyler Eifert for cheap, and they can replace Quinn with Ezekial Ansah and Barron with a draft pick.  Oh yeah, and they can sign Donald to a long term deal.

5.) The Rams can build a better defense

As stated above, the Rams starting defense would be:

This would provide the rams an obvious upgrade in the secondary and solidifying the front seven.  The draft would give you the ability to bring in solid depth and make the Rams Defense one of the best in the league.

6.) Goff can grow behind a more complete team

Probably the biggest improvement that can be gained is that Jared Goff could grow into an elite quarterback with the backing of one of the best defenses and Special teams as well as improving the offense as a whole.  Sammy Watkins would be replaced with a cheaper outside receiver (I personally like Martavis Bryant), they could sign Jordan Reed, who has thrived in McVays offense, for a cheap price and he can provide Goff with a weapon he has never had, and in the draft the Rams now have the ability to focus on the offensive line and depth all around the team.  The best way for Goff to grow is to give him a solid, all around team that can pick him up when he makes mistakes, which will happen.  As Goff grows more confident and learns the nuances of the quarterback position in the NFL, he will get to the point where he can put the team on his back, but as of now he needs a little help.