Rams HC Sean McVay Could Be the Future of Football 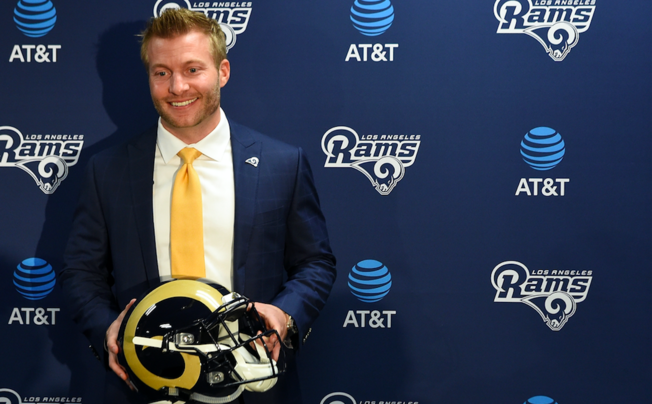 Millennials, adults ages 18 to 34 in 2015, are set to take over the American workforce. This year they surpassed Generation X to become the largest share at a ratio of three to one. Sean McVay, head coach of the Los Angeles Rams, entered his first season at the age of 31 years old, making him the youngest coach in NFL history.

McVay’s addition as head coach also brought floods of criticism. These criticisms have followed him most of his career, being “too young,” for most of the coaching positions he took. In response to former coach Mike Martz, who had especially harsh criticism, McVay said, “I’ve always been around the players’ age.” This year’s success, however, has silenced some of the age criticism McVay long endured.

There are only three head coaches in the NFL under 40 years old. Adam Gase (39), Kyle Shanahan (37), and Sean McVay (31). 65 percent of head coaches in NFL are 50 or older, filling 21 of the 32 head coaching positions. The oldest being Pete Carroll, head coach of the Seattle Seahawks, coming in at the age of 65. So, why does this matter?

In any profession, younger generations come in with fresh minds, new ideas, and lots of motivation. Of course most of these ideas are often met with criticism and resistance. As we know now, Sean McVay was no exception. Furthermore, with changes and new ideas come something that older generations have already experienced, failure. Other young coaches like Lane Kiffin and Josh McDaniels have held head coaching jobs without much success. In fact, four coaches younger than 34 have ever held a head coaching job in the NFL, and none of them have won 20 games in their career.

In the NFL, there is no need to reinvent the wheel, so to speak. McVay has built his success on a foundation that was laid out by other generations before him. Things like accountability and discipline. In fact, McVay was raised by one of the older generations of football leadership in John McVay, a former executive of the San Francisco 49ers. Those principles alone do not necessarily equal success, however. The Rams culture change is often thrown around as the biggest factor for the Rams success, and although it is a clear contributing factor, people that work alongside McVay will tell you of his football genius.

Several players and coaches have used the term genius when referring to McVay’s football I.Q. Tight end Logan Paulsen, who worked with McVay under the Washington Redskins regime, said “It’s something you don’t see, really, ever. I think genius is a fair term.”

It isn’t just the players and co-workers that express this genius, it is clear on the field as well. In just one year, the current Rams surpassed last year’s team, under Jeff Fisher, in nearly every football statistic imaginable. Sean McVay’s scheming and play calling have always been good, and his play creations are often innovative and certainly entertaining.

It is still too early in young McVay’s career to talk about how successful he will be, but not too early to acknowledge how successful he has been. The Rams have gone from worst NFL offense to the number one scoring offense in the NFL. Pro Football Writers of America named him coach of the year. McVay has reached the pinnacle of NFL coaching faster than his counterparts and certainly with more success at this point. As younger coaches enter the fray, there will be new ideas, new schemes, new plays and standards of coaching.

With an average age of 25.09, the Rams are the second youngest team in the NFL. If Sean McVay, the youngest coach in the NFL, can continue to be successful this could spell years of dominance by the Los Angeles Rams. If McVay can be innovative, if he brings new and fresh ideas to the football field, the Rams will be ahead of the curve in terms of coaching which may cause other organizations look to younger generations for new ideas as well. Only time will tell, and at the age of 31, Sean McVay has plenty of it.