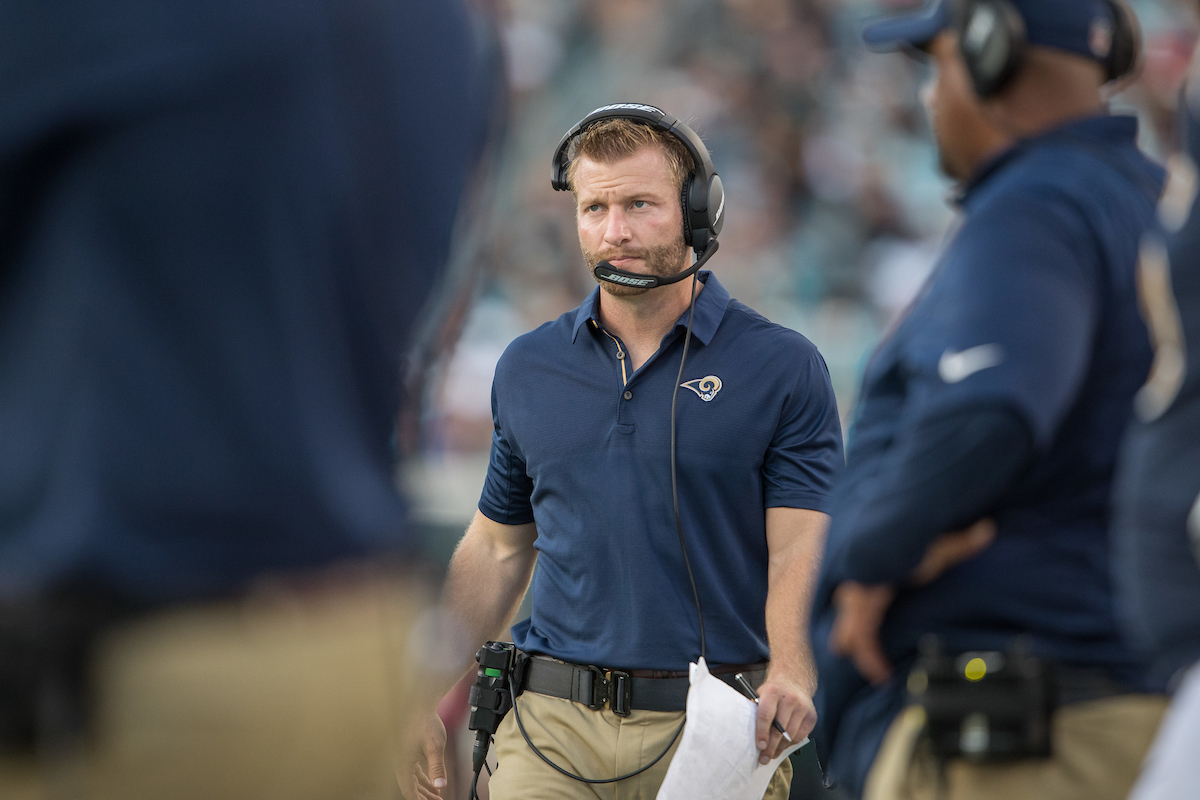 When Jon Gruden recommended Sean McVay to become the next head coach of the Los Angeles Rams he knew that McVay would be able to use his talents and respect around the league to make the Rams into a winner. While young, McVay was, and is, a highly respected coach in the league, known for his high football IQ and passion. It’s no surprise that Coach Gruden took a liking to him early on. But I don’t think even Gruden could predict that in McVay’s first year he would lead the Rams to their first divisional title since 2003.

When taking over the Rams offense, McVay knew he had two major assets, Todd Gurley and Jared Goff. Todd Gurley, has shown the league that he has the potential to be one of the best runners. Jared Goff, who was basically a rookie as far as coaching was concerned, had a lot of potential himself, and McVay felt he could bring it out of him. While these two assets are tremendous, poor offensive line play could negate a lot of the positive play.

Under the Fisher Era the offense was neglected. Fisher did not know how to coach the offense, and did not think he needed anything other than an average offense to win games. One of the classic examples of Fisher’s management of the offense was the Offensive Coordinator role. After Brian Schottenheimer left the Rams in 2012 to coach at the University of Georgia, Fisher had an opportunity to change the offense for the better. He could have hired a young coach with upside, such as Kyle Shanahan or Adam Gase, who both moved teams that off-season. Fisher also could have called upon a more veteran coach with respect around the league to take over the offense, as there were options that off-season for that type of coach as well. Instead, Fisher and the front office interviewed the QB coach and TE coach of the struggling Rams’ offense and hired Cignetti.  As we all know, that was short lived. This presented Fisher and the front office an opportunity to not make the same mistake again. However, they opted with hiring the before mentioned TE coach, their second choice from the year before. This unwillingness to interview serious outside candidates and make changes to a failing offense prevented the team from being successful. Sean McVay, however, went directly to work, identifying the offensive line as an area of need for improvement in order to achieve long-term success.

There are many reasons an offensive line is vital to the success of any organization. At the simplest level, they keep the ball handers safe and allow them to score. This year’s offensive line play was vastly helped by McVay’s ability to bring in LT Andrew Whitworth, and Center John Sullivan. McVay also worked hard to find a quality Offensive Line coach, which he did in Aaron Kromer. Kromer is a coach with over two decades of experience and a reputation for helping to build an offensive line.  Kromer even served as interim Head Coach for the New Orleans Saints in 2012.  This experience is not only beneficial for his ability to coach the Rams offensive line, it is another outlet and resource Sean McVay could use to grow as a coach and lean on when help is needed the most.

The biggest additions to the offensive line were Andrew Whitworth and John Sullivan.  Sean McVay brought over Sullivan from Washington, where he coached John as the offensive coordinator last season. While Sullivan was Washington’s backup last season he brought with him prior starting experience. Sullivan, who has played well this season, was a major upgrade over Tim Barnes, who had no right starting for the past two seasons. Center was a position that Fisher and front office ignored and the team paid the price.  McVay, an offensive savant, knows the importance of a center and his faith in Sullivan as paid off thus far. Andrew Whitworth was one of the best tackles in the league prior to the signing with the Rams. After a decade of playing with the Bengals it was time for a change. The Giants were the early favorite to sign Whitworth, but he felt that McVay, who coached under Jay Gruden, Whitworth’s former coach, would be a better fit.  The fact that the Rams had money to pay Whitworth helped as well. This level of respect that McVay holds around the league allowed us to sign a top LT away from the New York Giants, a team coming off an 11-5 season and a trip to the playoffs.

McVay’s construction of the new offensive line was essential to capitalize on McVay’s two best assets. Todd Gurley, who has now solidified himself as one of the best players in the league, and a potential MVP. He leads the league in yards from scrimmage (2093), total touchdowns (19), rushing touchdowns (13), and rushing yards (1305).  In last year’s offense, behind a line with Greg Robinson and Tim Barnes, instead of Whitworth and Sullivan, Gurley rushed for 885 yards and six touchdowns. The offensive line’s impact on Goff and the passing game is also very evident.  One of the most important statistics when analyzing what the quarterback is actually doing is yards per attempt.  If a quarterback’s Y/A is under 7.25 they’re not being a productive quarterback. This is often because they’re not looking downfield, sometimes due to lack of protection from the offensive line, sometimes because of injuries, sometimes because they’re just not good. The 7.25 yards/attempt number is raised from the older standard of 7.00 yards/attempt. This higher standard is based on Mike Lombardi’s analysis of today’s football, it is widely accepted as the new standard. Jared Goff’s has the second highest yards/attempt (8.0) and in adjusted yards/attempt (8.4).  Goff also has the highest yards/completion (12.9) in the league. This outstanding performance by Goff can happen due to the great offensive line play up front. McVay and Goff are really clicking and when the line allows Goff to stay in the pocket and make multiple reads good things happen. Jared Goff went from potential bust to perennial pro-bowler. Moving forward we are going to have to pay a lot of attention to this offensive line. Whitworth and Sullivan are older and we still need to improve.

Make sure to stay tuned to DTR for profiles on potential free agents and draft prospects in this upcoming draft class.