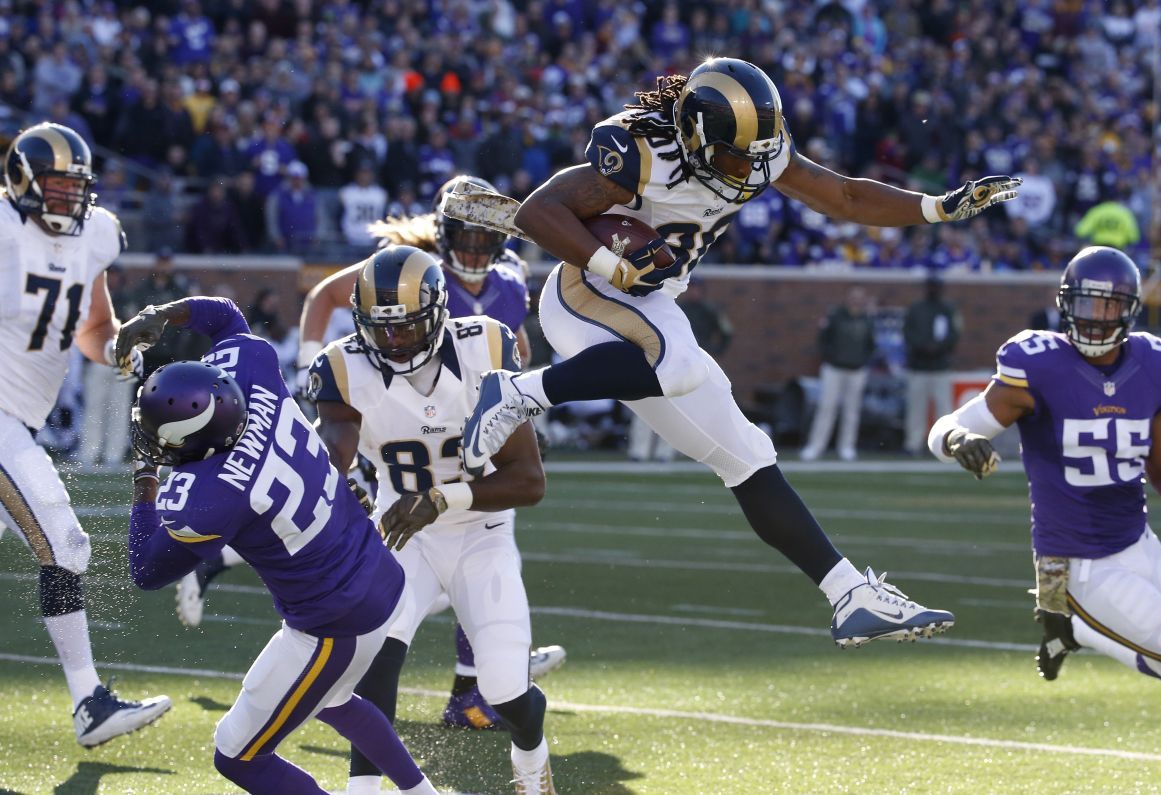 It still isn’t official, but unless the Los Angeles Rams have a total collapse, this is a team that is going to go to the playoffs. While the Rams won’t have to face a team like the Green Bay Packers, Dallas Cowboys, or Seattle Seahawks, the NFC is still the strongest it’s been in years with the potential of four teams having 12 or more wins.

In three weeks the Rams will be in their first playoff tournament in over 10 years. With that said here are the NFC teams that are still in the hunt ranked from worst to best matchups.

Outside of special teams, the Vikings are simply better than the Rams. They may not have the offensive numbers that the Rams do, but that’s also not their style. The Vikings play like a playoff team and are built to win games in January.

Yes, the first meeting between these two were close. The game was tied 7-7 going into the fourth quarter. However, when it comes to playing a good defense on the road, it’s hard to trust Jared Goff and the Rams’ offense.

Against Jacksonville, the unit put up just 13 points. Against the Vikings, obviously they scored just seven. That doesn’t even count the 10 points they put up against a full strength Seahawks defense back in September.

The Vikings are the one team that can really beat the Rams on the line of scrimmage on both sides of the ball and in the playoffs, that goes a long way. Not only that, but once again, this would be a game that would be played in Minnesota.

On offense they have a duo of running backs that will scare you as well as a passing attack that features Julio Jones, Mohammad Sanu and Matt Ryan. This is the one team that could match the Rams if it were to be an offensive shootout.

The Falcons are also just one year removed from going to the Super Bowl and are winners of five of their last six. They are finding their groove at the right time and are not a team that any team will be happy to see in the playoffs.

The Saints are a team that the Rams have already beaten, however, if these two teams play again, it could be a completely different game. In the first meeting the Saints were without their best defensive player and their number two cornerback. Because of this they were forced to play Kenny Vacarro down at cornerback who normally plays safety.

Because of that, it could be a completely different game. Alvin Kamara went wild when the two teams played and he’d definitely play a role if the teams were to play again.

New Orleans has been there before and with Drew Brees nearing retirement, this is a team that is playing for something and are dangerous. They are running the football well, they can play a defensive battle, and they have the pieces to win in a shootout.

A second game against these Saints would not be as much of a walk in the park and some may make it seem.

It seems odd to put a team that the Rams just beat 42-7 this low on the list, however, it is warranted. If the Rams play the Seahawks it will once again be in Seattle against this time a Seahawks team that is mad after being embarrassed.

It took a huge effort from the special teams and a great defensive performance to beat Seattle this last time around. A play here or there and that game could’ve been a lot closer.

The Rams’ average starting field position was their own 47 yard line. Jared Goff only threw for 124 yards. This is a team that has not just good, but great special teams, however, that performance against Seattle was even still remarkable. A 124 yard performance by Goff also isn’t going to get it done in the postseason.

Playing Seattle in Seattle in a playoff atmosphere with Russell Wilson at QB even after beating them 42-7, is still an unfavorable matchup. Thankfully, this is highly unlikely.

Like the Minnesota Vikings, the Carolina Panthers are a team that could be able to matchup on defense with the Rams’ offense. The Panthers also boast the fourth best rushing attack in the NFL, while the Rams have one of the worst run defenses.

Carolina is a team that has also been there before as they were in the Super Bowl just two years ago and they have seemed to have found their groove.

Where I do give the Rams the advantage is on defense. Cam Newton has seven games this season with less than 200 yards passing and his team is 5-2 in those games. He’s also 3-1 in games in which he has a QBR under 55.

The good news for the Rams is, that will only get you so far especially in the postseason. The Panthers run the football well and play good defense, but so do the Rams. If this game were to happen it would be about which quarterback made more plays and put their team in the best position to win.

This is a matchup that is highly unlikely. The Cowboys need everything to go their way if they are to make it to the playoffs and if they do, it’s going to be difficult for them to compete.

Dak Prescott is not playing well, although that could change with Zeke Elliot back in the picture. The are also an average team defensively.

When all is said and done, the Cowboys are a team that the Rams beat on the road this season and with the way their are playing would be heavily favored in a rematch.

The Philadelphia Eagles and Los Angeles Rams played the most entertaining game of the year a few weeks ago, however, things have changed. Carson Wentz is out and Nick Foles is in.

It is because of that reason that Rams fans should be rooting for their team to split the final two games. If the Rams finish as the four seed, it would most likely set up a win on the road against the Eagles lead by Nick Foles. At that point, you would have to like the Rams’ chances at an appearance in the NFC championship game.

The Eagles have a good defense, but it is one that the Rams scored 35 against. Without Wentz it is going to be difficult for Philadelphia to compete. They simply are not the same team and because of that, it would set up a dream scenario for the Rams in the divisional round.

The Detroit Lions are a good football team, however, it is because of one reason, and that is Matthew Stafford. They aren’t going to scare you on offense with no run game and a receiving corps consisting of Golden Tate and Marvin Jones and they don’t have a dominant player on the defense.

The Lions are certainly a more favorable matchup than either the Falcons, Saints, or Panthers in the opening round of the playoffs.

In order for this to happen the Lions would need Atlanta, Carolina, or New Orleans to lose out. That would give them the sixth seed and a game in Los Angeles against the Rams.

There is a lot of football left to be played, but it’s time to start thinking about who would be the best matchup for the Rams in the opening round and what road will give them the best chance to end the year in Minnesota holding the Lombardi.