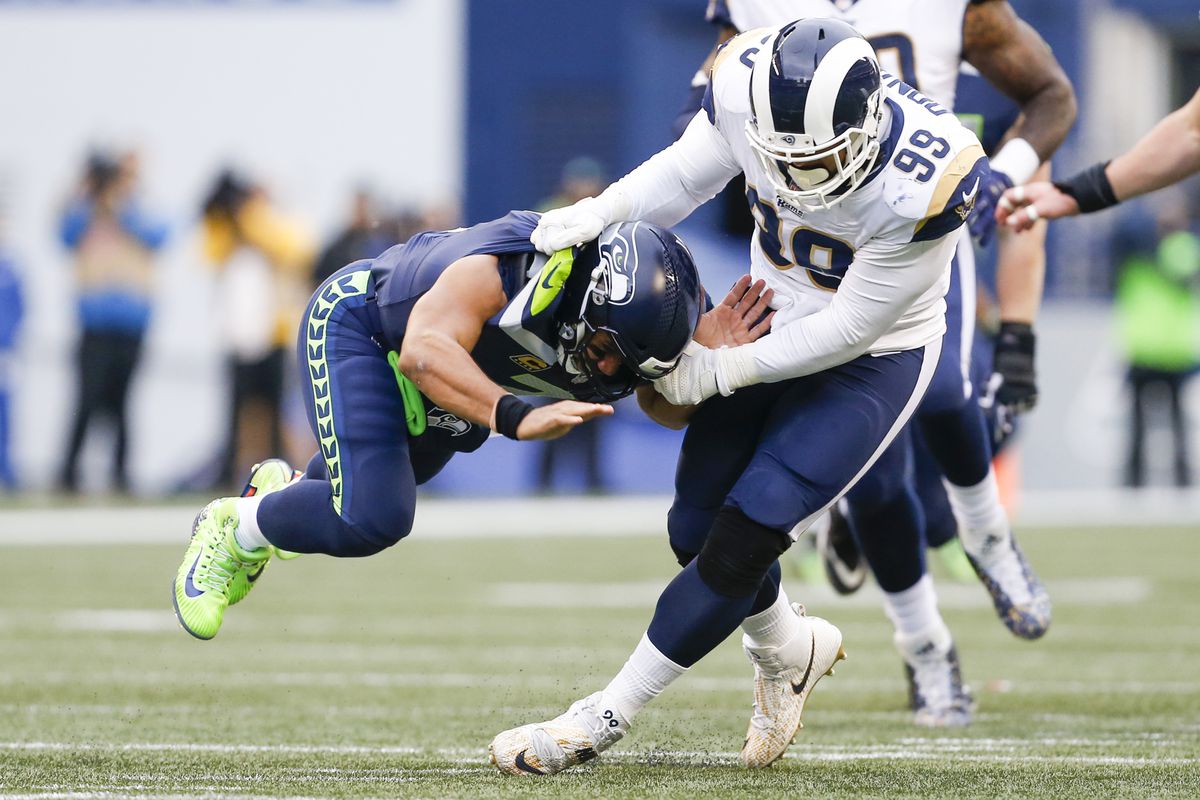 You learn more in a loss than a win, but that was certainly proven this season when the Rams lost at home to Sean McVay’s old team the Washington Redskins in a game that they blew in the final minutes. They proved it shortly after in a loss to the Seahawks at home in a game they outplayed the Seahawks and still had a chance to win. It was proven when the Rams went to the fourth quarter tied at 7-7 in a playoff-like atmosphere against the Minnesota Vikings only to blow it at the end 24-7. It was most definitely proven when the team lost the time of possession battle at home by 40 minutes and still almost pulled off the win in a game they probably should have. One thing about all four of those losses? They have never come off any of them to lose the next game and they weren’t going to do that versus the Seattle Seahawks.

The Rams went into Seattle and turned a heavily-anticipated virtual NFC West title game into a disaster and nightmare scenario for the 12th man. It started out just like seven games this season have started with a turnover on the opening drive and the Rams never looked back. However, did you just hear that? Seven times this season the Rams have turned the opposing team over on the first possession. Getting extra possessions is absolutely huge but it’s even bigger come playoff time. The Rams just emphatically gave the Seahawks their worst loss under Pete Carroll. It’s just a sample of what’s to come for immediate future (playoffs) and the long-term future of the league.

In a day where the NFL saw possibly the next franchise QB born in Jimmy Garoppolo for the San Francisco 49ers, the Rams still managed to still the headlines by taking out all their anger from years of Seattle’s dominance on them and their fans at Qwest Field. The Rams put not only the 12th man, the Seahawks, the 49ers and Cardinals on notice. They put the entire league on notice. The headlines this morning aside from the debacle in Pittsburgh were pretty much dominated by the idea of Todd Gurley being an MVP. It has ended for the Rams in losses to the Vikings and Eagles when the media hype died down and people thought they “fell back down to Earth” however, those people were wrong and the Rams are proving it. 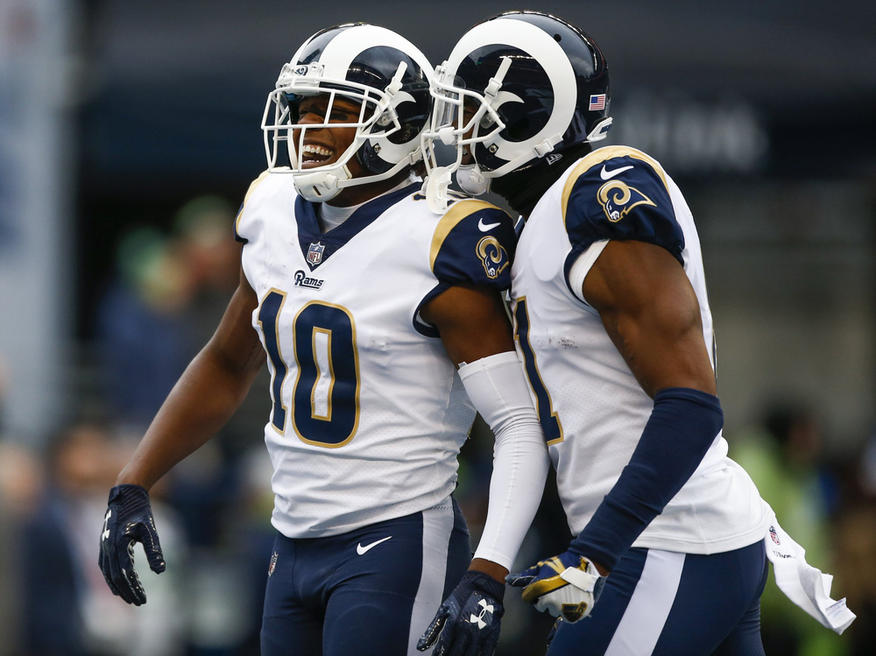 The Rams offer something that no one in the NFL offers at the moment and will be their saving grace come playoff time. We will take some of the playoff contenders and match them up to the Rams in the category of average start of a drive. The Eagles start their drive at the 30.3 which is extremely good, the Steelers start at the 28.4 which is above the average 25 you receive with a touchback every down. The Patriots start at the 28.7 which again, is good. The Saints start at the 29.4, Falcons start at the average yard line of the 25, Panthers start at the 29.7 and the Jaguars even start a the 30-yard line. Now let’s take a look at where the 1999 Rams started their drives on average, the 31.5 which is out of this world. However, today’s Rams team has a number that is unheard of and speaks to why the Rams score so many points on a weekly basis. This Rams team has averaged the starting position of a drive at the 33.7-yard line. That is unreal and it’s part of the reason why you may not see Jared Goff consistently throw over 300 yards, Todd Gurley not consistently go over 100 yards or why there is normally not two big-time receiver box scores and it’s because it’s less of a field that is set up for the Rams in part because of Pharoh Cooper, the Rams kick and punt returner that has ascended this team.

That has been the recipe of success for the Rams their drive on average starts at the 33.7-yard line, if they don’t get the ball to start the game, don’t worry because they force a turnover on the opening possession 50 percent of the time. The team also averages 2.43 points scored per drive which ranks top five and also only allows 1.59 points scored per drive which ranks top five as well. This team is just getting the job done in every phase of the game. Their one big issue sounds funny but it’s honestly true. The Rams are one of the most explosive teams in the league and due to their ability to score “too fast,” it actually allows the opposing team to control the clock. For instance, blocking a punt and then taking it back to the house now puts a defense that needed some rest in the first place, back on the field. Even with the offense, for example, the Rams score a 60-plus yard touchdown through the air on the second play of the drive. Now the opposing offense can control the clock, build up a longer drive and tire out a defense that barely was able to get a breather because of how explosive the Rams are. That’s the one crazy thing about the Rams they might be too explosive for their own good but just about everything bodes well for them in the playoffs. Here’s a look at the team numbers stacked up against the top NFC playoff teams.

That right there is exactly why the Rams are the scariest team. They get penalized in a few of these stats because of the fact they are too explosive for their own good. Look at the Falcons for instance. A team like the Rams that just beat the Seahawks on the road 42-7 might be able to get up on an Atlanta team in the playoffs by a few possessions. The Falcons inability to really create many takeaways puts them in serious danger in a do-or-die playoff game. How about the Panthers who barely even average two points per drive? If the Rams are able to score on the Panthers, a defense that has been revered as a top five defense but has somehow given up more than every NFC favorite, how will Carolina keep up the pace? How about the Vikings now that the Rams have seen them and know how they play? This is what I’m talking about and this is exactly why the Rams are in fact the scariest team in the NFC. What about the NFL? Glad you asked, here’s how these top three AFC teams stack up against the Rams.

See here? The only clear-cut disparity between all of the teams is Jacksonville’s defensive output, that same defense that the Rams overcame to win on the road this season. While it might be hard for many to believe that have already placed the label on the Rams being a dumpster fire, it’s time to realize that the Rams production this season is comparable to the Patriots and Steelers. It’s also time to realize that even though the Rams lost to the Vikings and Eagles in the regular season, they are the one team that both teams do not want to see come playoff time. The Rams are simply the scariest team in the NFC and it might be the case with the the entire NFL.