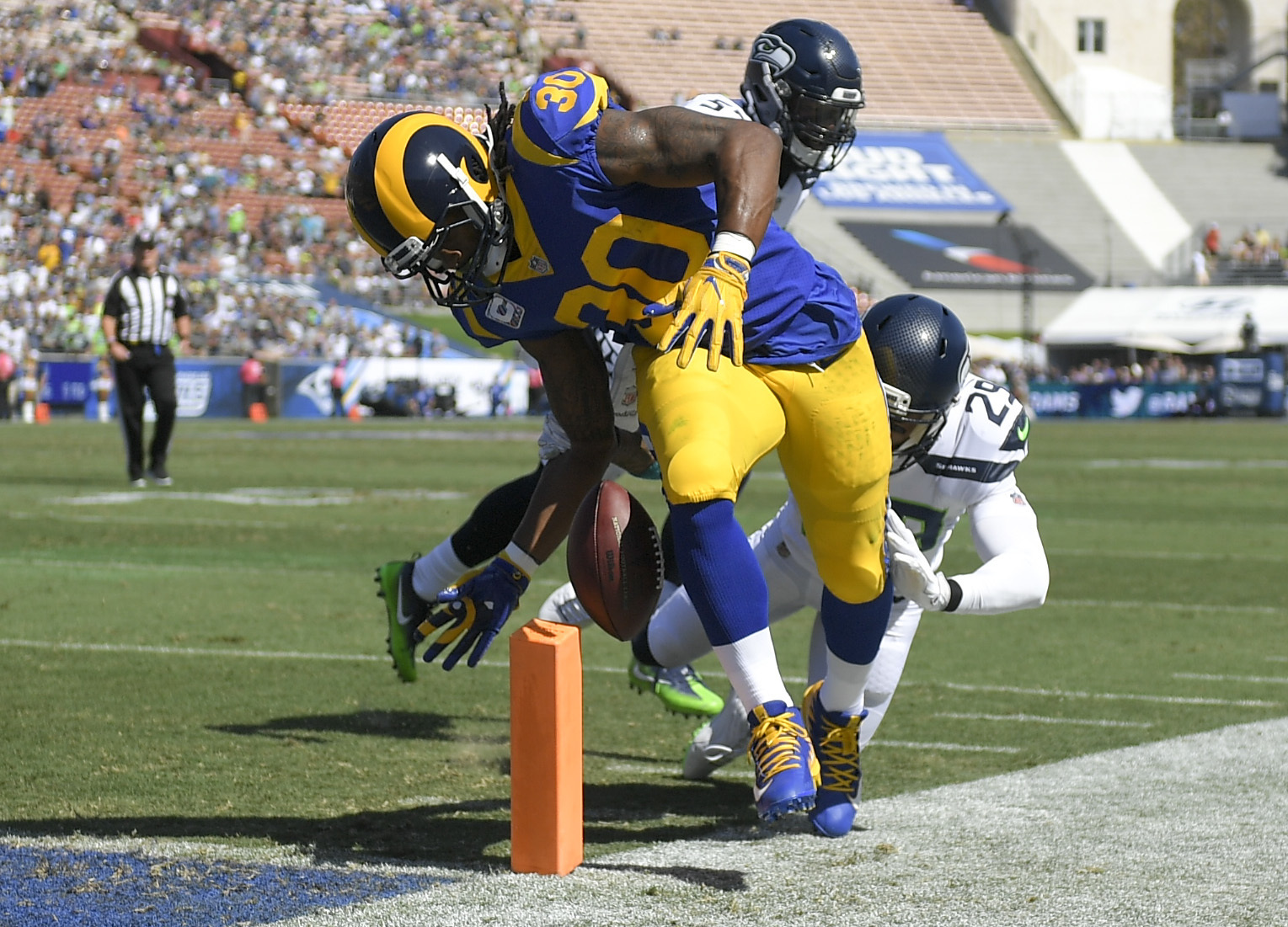 Things didn’t go the way the Rams wanted them to last time they faced the Seahawks. However, it’s time for the Rams to bury the hatchet for this season and that will have to come with a win over Seattle. There is not much room for error here, the Rams simply need to beat Seattle this Sunday if they want to avoid sweating out the rest of the year in hopes of clinching their first playoff berth since 2004.

The big story-line coming into this game is health and the two sides are facing completely different types of health scenarios. One, being the Rams, are likely getting back just about everyone off of the shelf including their top receiver Robert Woods who has missed three games. The other team is the Seahawks who are in jeopardy of playing this Sunday’s pivotal game without five-to-six of their 11 normal starters. We already know CB Richard Sherman, DE Cliff Avril and SS Kam Chancellor are out for the year but even LB’s Bobby Wagner, K.J. Wright and possibly DE Michael Bennett could miss this Sunday as well. This is the time for the Rams to come out and get revenge on a team that stole a win from them on their home turf.

Normally before we preview a game we don’t have the pleasure of that team playing the same team twice in a year but this happens to be a division opponent and so we can preview this game in multiple ways. First off, the Rams cannot afford to turn the ball over five times no matter how crazy a win like that could have been earlier in the year. Jared Goff in October at the Coliseum did something he hasn’t done all season since and that is throwing two interceptions. With a more depleted look in the secondary, it’s hard to imagine Goff making those same mistakes again, on top of the fact that Goff after that game has been on a roll. The second thing is the same thing many including myself have complained about and that is the lack of touches that MVP candidate RB Todd Gurley has received. Gurley, in last week’s game, had 16 touches despite annihilating the Eagles impressive defense. Gurley in the Seahawks game earlier in the year? The same number, although he did struggle but the fact is that the Rams chances of winning improve significantly when they utilize Gurley. When Gurley gets at least 20 touches in a game the Rams are 7-0 this season. In other words…feed Gurley.

Honestly, it looks like the Rams should the obvious advantage with the fact they are getting closer to being healthy and the fact they have the more explosive offense but the Seahawks are at home in a place they do not lose often and they happen to have Russell Wilson. The magician himself may have the worst offensive line, no running game to speak of and zero big-body receivers but make no mistake he is still going to make plenty of plays. This Rams defensive front has racked up the most sacks in the NFC but that is not going to be easy to do against Wilson. Wilson has made up of over 95 percent of the entire Seattle offense and although the Seahawks looked down and out last week and ultimately ended up losing the game to the Jaguars, Wilson led them back from 27-10 with two miraculous touchdown passes. There is no reason to ever count out a player who threw four interceptions in a playoff game and led his team back to win. The Rams cannot take this game lightly. Here are Wilson’s stats against the Rams since entering the league: 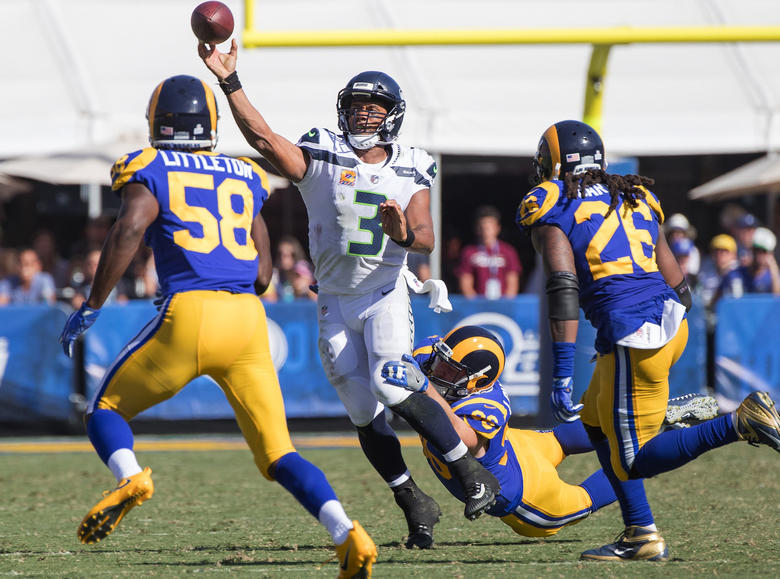 In conclusion to these stats, I think you have to take a couple of things away. First, Wilson hasn’t run for a touchdown against the Rams since October 19th, 2014. Second, the Rams have actually held Wilson in check for the most part as far as his legs go. Aside from one game in which he ran for over 100 yards on only seven carries he really hasn’t dominated the Rams. Why? Because when you really think about it Wilson isn’t that type of QB. Sure, he can run for big chunks of yardage but he runs situationally and as his career has developed he’s really turned his legs into a mechanism for allowing a play to further develop as he looks to throw it downfield. The big issue has been the big play for the Rams and that’s something that Wilson just completes against everyone. Wilson is averaging almost a 70 percent completion percentage and on throws he’s completed Wilson has simply averaged 11.3 yards per completion. That’s kind of insane. That has been the Achilles heel for the Rams, the big splash play that Wilson can make happen in an instant. That’s also going to be a magnified problem with Rams starting CB Kayvon Webster out for the season and how they are forced to start Troy Hill who has been exploited on one of Wilson’s magical big plays that almost won them the game in Los Angeles last season.

Here is what Mytopsportsbooks.com on this Sunday’s spread:

“Week 15’s Seahawks/Rams game opened as a pick’em but the line has now swung to Seattle -2, despite the Seahawks suffering from a rash of key injuries on defense. As their respective DVOA numbers indicate, the Rams are a more balanced and complete team. If the young squad can handle the pressure of playing in an uber-hostile environment with the division lead on the line, they should leave Seattle with a win and a commanding lead in the NFC West.”

I think this is the game that once again, many will take a team that hasn’t proved to be a consistent winner in well over a decade and clump them into a pretender pile of teams. Many among the media are saying the Seahawks are going to beat a Rams team that isn’t as good as we thought. However, I don’t subscribe to that logic, the season has been a pattern for the Rams who have won three of every four games in each of the three-quarters of the season. They already got their loss out of the way against the Eagles and now I would expect them to win out. This will be the game where the Rams bounce back just like they did against New Orleans after a brutal loss to the Vikings and the backlash that came with it. With Robert Woods returning this week the offense seems to be at a clear advantage and if the defense can stop this from being a shootout the Rams will win this game and be right in the driver’s seat to take over their first division title since 2003. This win would keep the Rams in contention for a first-round bye and push the Seahawks down as far as the nine seed if the Packers and Lions both won this week.