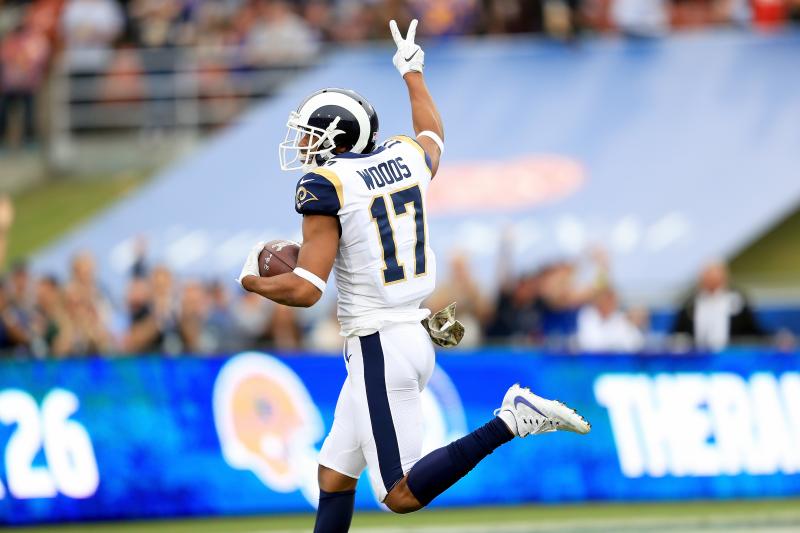 Over the last two seasons, the Los Angeles Rams have been all about ending long streaks. This year the Rams broke a 15 year deficit without having a winning record while in 2016 Kenny Britt became the first Ram receiver since Torry Holt to break the 1,000 yard mark.

Britt finished the year on the worst offense in the NFL having 1,002 yards, also a career high.

This season, the Rams have a significantly better offense and more talent at the wide receiver position, but are in danger of once again not having a 1,000 yard receiver.

As it stands, rookie wide receiver Cooper Kupp leads the team in receiving with 783 yards while Robert Woods has 703 with just three games to play. That begs the question, will either guy break the 1,000 yard mark?

It seems remarkable that the Rams offense could improve so much on offense, yet be left without a 1,000 yard receiver.

At this point last year, the offense had 2,810 yards passing. Fast forward to 2017 and Goff has nearly 3,400. That’s already more than last year’s 3,290 yard total in which Britt managed 1,000 yards. That alone makes his milestone that much more impressive.

What makes the Rams 2017 offense stand out is how much they spread the ball around. While last year’s team had 13 players with at least one reception compared to this season’s 12, Britt was responsible for 33.3% of the team’s receiving yards.

Through 13 games, Kupp, the Rams’ current leader makes up for just 23%. This year’s receiving group is on pace to have four players record more than Brian Quick’s 564 which was the second most in 2016. In fact, the Rams are on pace to have three players top 700 yards, something they had only done just once since Holt last broke 700 in 2008.

To take that stat one step further, if Gurley breaks 700 yards, he needs just 98 to finish the year, it would be the most 700 yard receivers the Rams have had since 2006 when Holt, Isaac Bruce, and Steven Jackson all broke 700 yards.

While a Rams receiver may not break 1,000, what they are doing is as much, if not even more impressive. They don’t have just one guy dominating in the passing game. Instead the Rams have three and four guys if you include Sammy Watkins who is on pace for 675 yards, that defenses have to watch out for.

Getting back to whethre Kupp or Woods will break 1,000 yards, with three games left Cooper Kupp is currently on track for 963 yards, but needs 72 yards per game to break 1,000. The rookie out of Eastern Washington has broken that mark just three times all year. And with Robert Woods returning against the Seattle Seahawks this week, the amount of targets that Kupp has gotten over the last three weeks will go down.

Speaking of Woods, he’ll need to average 99 yards, something he’s done only twice this season. The former Buffalo Bills receiver is on pace for 913 yards.

Given that, it seems more likely that Kupp will end up with around 80 receptions for just over 900 yards while Woods will probably end with 65 receptions for 850.

When it comes to breaking the 1,000 yard mark, it is something that fans and the media really pay attention to. However, when it comes to the 2017 Rams, context needs to be factored in. If the Rams have three or potentially four receivers break 700 yards, that’s better than having one 1,000 yard receiver.

It all comes down to production. The Rams have without a doubt increased their production despite not having a receiver break 1,000 yards.

McVay has designed an offense that spreads the ball around. Unlike last season in which there were nearly 500 yards that separated the top two receivers, this year’s group is much more clustered together in terms of their production.