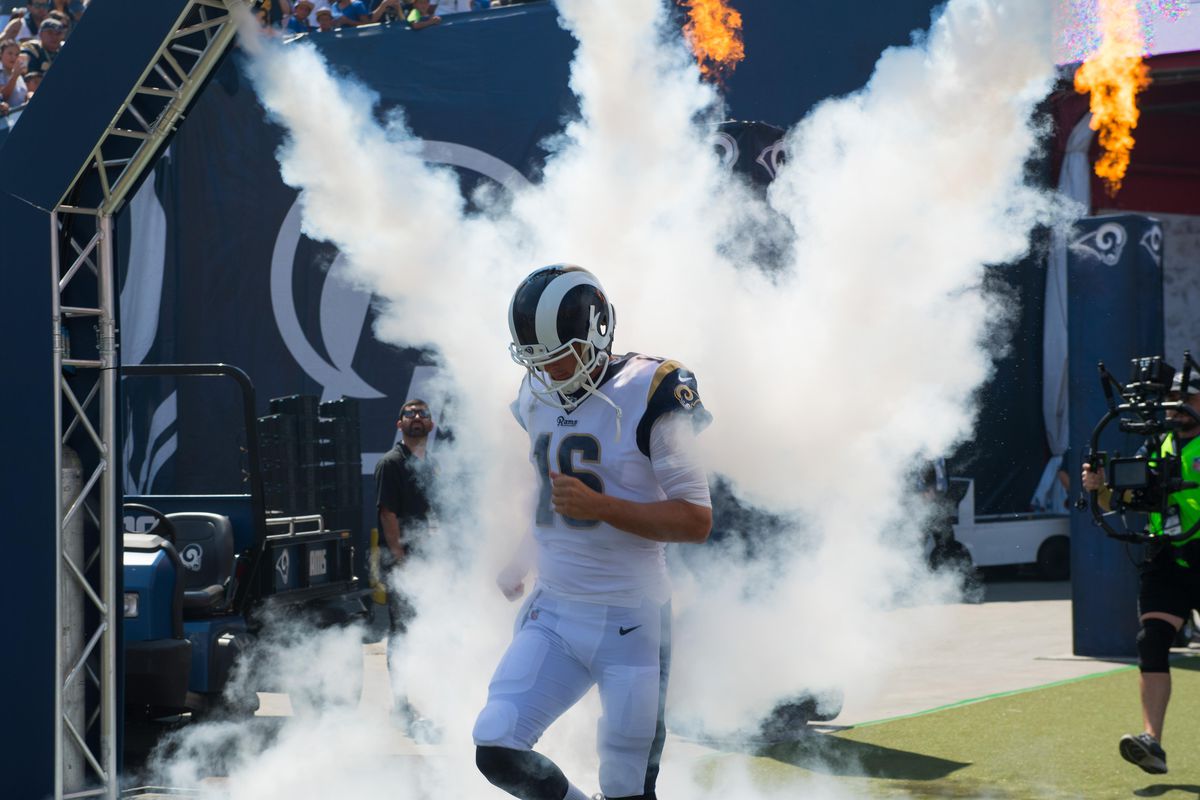 Believe it or not the same Quarterback that went 0-and-7 in seven starts last year has led his team to their first winning season since 2003. So, how good of a season is this QB having?

This QB happens to be Jared Goff of the Los Angeles Rams, his team is in the midst of arguably the most defining two weeks of the season but regardless of what happens Goff to this point has been an MVP candidate. You may hear the names Tom Brady, Carson Wentz and Russell Wilson in that conversation but what if I told you that Goff belongs in that conversation? If this was last year you would just call me mentally insane but this season Goff is in fact an MVP candidate. The now-23-year old signal-caller has led his team to a 9-and-3 record and he’s shown no sign of stopping. Let’s take a closer look at the resume Goff has provided thus far compared to the most popular MVP candidates.

See what I mean? Why is Goff not being mentioned in the same argument? Tom Brady right now seems like the MVP but Goff is at least up for the discussion. If you look at just statistics you could make the argument for Alex Smith but his team continues to free-fall which brings me to my next point. The MVP of the league needs to be leading his team to at least the playoffs. We have seen over the years Cam Newton and Matt Ryan receive the honors and also lose the Super Bowl thereafter. However, it goes to show you that the best player doesn’t necessarily always win the MVP. This iconic award should go to the best player that season and let’s be honest Goff does not look like the best player but he is up there. He continues to grow during the season and because of last season with Matt Ryan ascending under play-caller Kyle Shanahan, you cannot hold the idea of having Sean McVay against Jared Goff’s argument for MVP.

So with that being said Goff is an MVP candidate. However, where does he fall among the top? I would say you have the argument for Goff over Wentz. Sure, Wentz might be the better QB now but Goff has a comparable team record, a better completion percentage, more passing yards on less throws, the same amount of interceptions and a higher yards per attempt average. Goff only is behind Wentz in touchdowns and passer rating but you wouldn’t know it with the way the media responds to the two. Could you make the argument for Goff over Wilson? Sure, but Wilson doesn’t have the offensive line that Goff has and has zero run game to speak of, which bodes well for Wilson’s resume. Wilson is carrying this team and refuses to quit despite the amount of injuries that have made their playoff hopes look bleak. Besides that fact, Wilson has also gone into Los Angeles and beaten Goff head-to-head.

Although Brady is looking like the MVP especially after Wentz loss on Sunday Night Football. This battle is far from over and Goff has a chance to really strengthen that resume with a head-to-head win over Wentz this weekend and a redemption head-to-head win in Seattle over Wilson. This is interesting because you can make the argument people simply aren’t mentioning Goff as an MVP candidate because they haven’t quite seen him. Goff and the Rams have only played on one prime-time game against one of the worst teams in the NFL. This weekend the Goff and Wentz bowl will be shown nationally in the 4 o-clock window on FOX which is the perfect opportunity for Goff to make a statement. The following week the Rams and Goff go to Seattle to take on Wilson who just carried the Seahawks to a statement win over that same Wentz and Eagles team.

What can we expect with Goff? For starters, Goff’s one big knock this season has been his ability to perform against the top defenses. Take a look below:

When taking a look at those four games keep in mind three out of those four resulted in losses. The crazy thing is if you take away the Seattle game, Goff’s lowest passer rating on the season would only be 75.8 which isn’t bad at all. He’s had four games over 100 and three over 90 in those games the Rams have outscored their opponents 264-138 which is a 126 point differential. Goff has played at an extremely high level this season and obviously the stats have told the story but when you watch the film you see someone that is now comfortable and is confident in the pocket. It’s allowed him to go back to being the Goff we all saw at California but he’s added more to his game and it’s resulted in the Rams’ magical season.

What’s left on the schedule for Goff?

It’s imperative that Goff and the Rams finish strong for not only the MVP possibility but also the playoffs that are still not guaranteed. So here are the defenses left for Goff to play as this incredible 2017 regular season starts to wind down.

As you can see Goff does not have an easy next three games but they are simply opportunities to strengthen his MVP resume with not only his performance but how far he eventually leads this Rams team. With the Eagles losing to the Seahawks, the Rams can actually break into the second seed and push for a first-round bye in the playoffs with a win over the Eagles. We all know what a first-round bye would mean for this team that hasn’t made the playoffs in a decade. While Goff probably wouldn’t care if you asked him about the MVP, if you do and find yourself rooting for Goff to win the MVP in year two then it comes down to these next four games. If the Rams were to win out in impressive fashion how would a quarterback that led a team that went 4-12 a year ago to 13-3 not be concerned an MVP favorite at that point? Nothing is guaranteed and so we will just have to watch and find out. One thing is for certain, it may have been crazy a year ago but today, Goff is a legitimate MVP candidate.