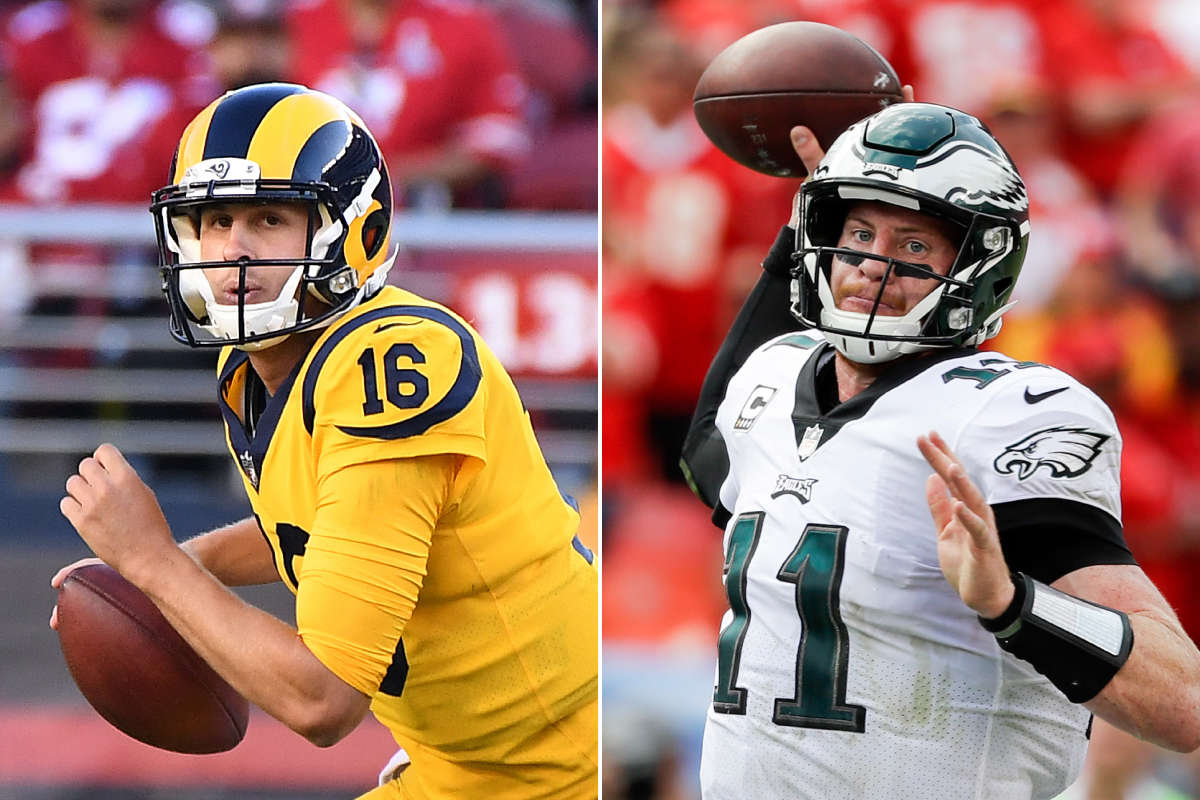 The NFL had it made. Two back-to-back franchise quarterbacks picked one and two in the 2016 NFL Draft are on NFC powerhouses and even better? They are both MVP candidates, oh and they are both playing next week in Los Angeles.

The stage was set, after all, it’s never a guarantee that the two quarterbacks that go first and second overall are going to both pan out. You do get your Eli Manning and Philip Rivers but then you also get Peyton Manning and Ryan Leaf or Jameis Winston and Marcus Mariota. Well, the Rams QB Jared Goff and Eagles QB Carson Wentz have lit the league up with some gaudy numbers after a year of Wentz looking like a solid future franchise QB and Goff looking like an utter bust. How perfect of a story-line could the NFL have been handed? The first two picks of the NFL draft a year ago but also the fact that both of these teams missed the playoffs last year and are now among the best of their conference.

The NFL simply kept their Sunday Night Football game intact, the Steelers who have had eight prime-time games this season versus the Ravens who are quite honestly one of the more boring teams in the league. But hey, this game will be a must-see even though the Steelers played them earlier in the year and won 29-6 in Baltimore but with Pittsburgh now at home, this should be a thrilling game right? The Ravens are averaging the 18th most points in the league per game and the Steelers are 13th in points per game.

Let’s take a look over at the Sunday Night Football game that should have been. The Rams have the second highest scoring offense and their defense is allowing the seventh-fewest points per game. The Eagles have the number one scoring offense their defense is allowing the third-fewest points per game. This clearly is going to be a greater battle. This has potential to be the game of the year and the NFL completely dropped the ball on what would have been great to showcase the next two young juggernauts of the league in the Rams and Eagles on the national stage during Sunday night. Not to mention the playoff implications for this game where if the Rams won they would be one step closer to possibly a first-round bye in the playoffs as opposed to the Steelers winning against the Ravens and it literally means nothing besides the fact it alters the sixth-seed in the AFC playoffs. Which the sixth-seed in the NFC could compete with anyone but the sixth-seed in the weak AFC is like the play-in games before the NCAA Tournament where we find out who gets the privilege of getting throttled by the top dogs of the tournament or in this case by the Steelers or Patriots or even the Jaguars. On top of all of that, the Eagles may actually face the Rams in the playoffs so this could literally be a preview of the NFC Championship game but no, the NFL would rather have a team that has just about locked up a first-round bye versus a team that is fighting to even make the playoffs to begin with.

We are possibly looking at a 9-3 Rams team taking on the 11-1 Eagles who only lost to the red-hot Chiefs earlier in the year and now would probably blow them out of the water if they played them at this point in the season. It’s a no-brainer really, the fact is that this was the perfect opportunity for the NFL to showcase these two and now while they still will have the national slot for the 4’o clock window of games on the east coast it still will not be the same. It’s not like this should shock anyone though the NFL didn’t even make the Steelers and Patriots game a prime time game out of eight of the prime time games the Steelers were scheduled with before the season.

The good news for both of these teams moving forward is that next year there won’t be a flex scheduling for these teams because this game will probably be prime time if they play unless the NFL butchers it all up again. Also, the reason for having the flex scheduling is for games like this that sneak up on the league and would clearly be a huge sell to the national audience. If you aren’t flexing the potential 9-3 Rams vs. the 11-1 Eagles for the potential 10-2 Steelers vs. the likely 6-6 Ravens after they lose to the Detroit Lions on the road this week then what are you doing?

Then again to keep the Tom Savage vs. Joe Flacco match-up on Monday Night Football and not replace it with Jared Goff vs. Drew Brees is another story. It’s clear that the NFL flex scheduling isn’t as convenient as it was supposed to be and unfortunately it shows being a winning team for more than one year also helps in gaining the attention of the NFL.