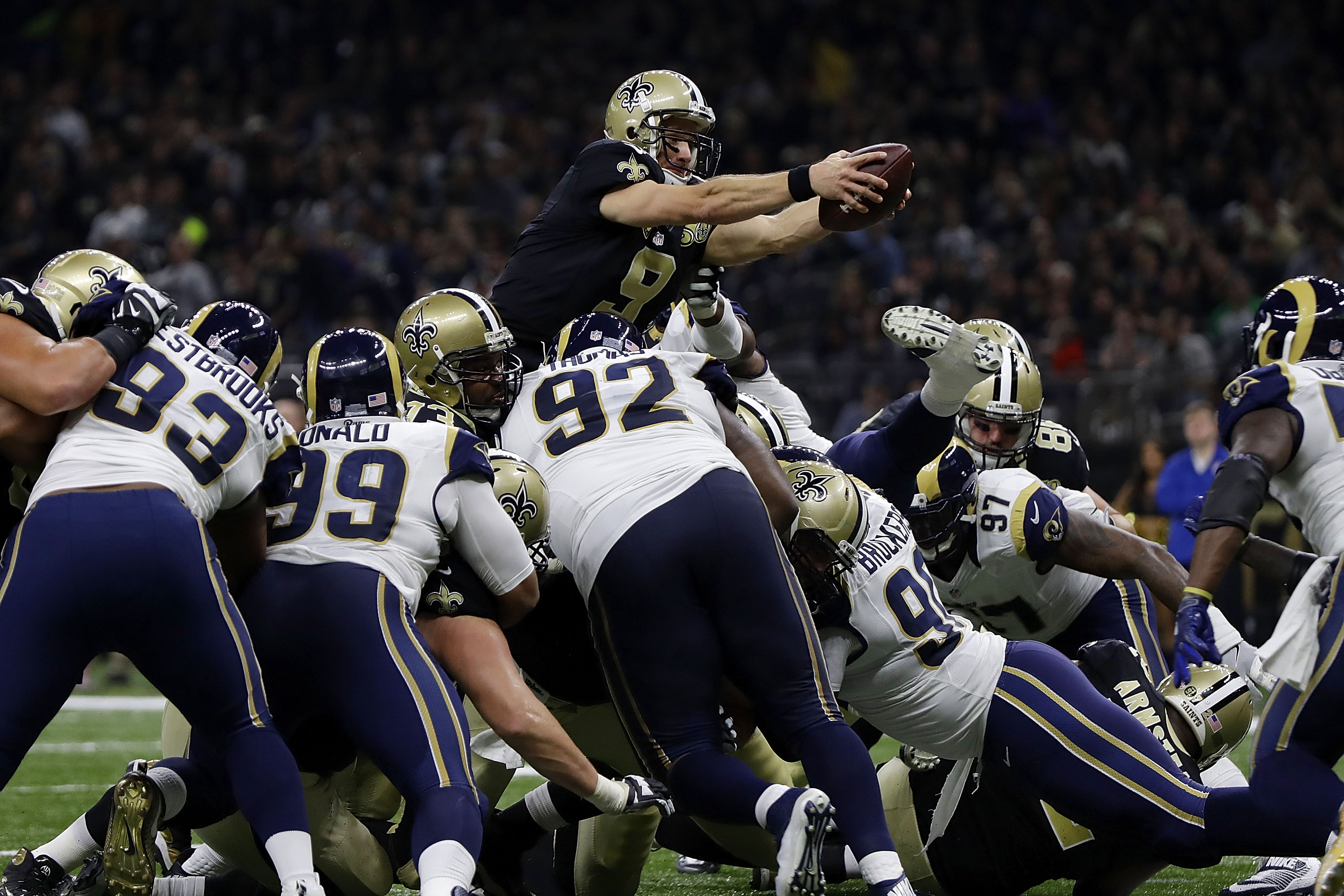 Last year the Rams went into New Orleans with a young rookie QB Jared Goff who stood toe-to-toe with legendary future Hall of Famer Drew Brees until the wheels completely fell off the wagon. This year it’s not a 5-5 team versus a 4-6 team playing in desperation of making the playoffs. No, instead this year it’s an 8-2 team taking on a 7-3 team playing for a first-round bye in the playoffs.

It’s amazing what a year can do for a team in the NFL. It’s not like the NBA where teams completely marinate in a bath of mediocrity. No, with the NFL injuries, trades, free agency acquisitions, coaching and draft picks can change the course of a season. As a matter of fact, I would even throw weather in there after seeing what the Hurricane did to the Miami Dolphins and Tampa Bay Buccaneers season. But that is all besides the point, the point is the Rams have taken a 4-12 team and have turned them into a playoff team. The Saints, on the other hand, have taken a team that consistently finishes 8-8 and has turned them into a playoff team as well. On top of that, the Rams hiring of Sean McVay has led to the Rams offense going from worst to nearly first overnight while the Saints defense after drafting star rookie CB Marshon Lattimore and DL Sheldon Rankins last year have evolved into a scary defense.

Believe it or not these two are a reminder for the Browns of the world that it is possible for teams to simply get better. It’s honestly crazy how much better the Rams offense have gotten with the addition of not only McVay at Head Coach, Matt LaFleur at Offensive Coordinator and Greg Olson at Quarterbacks Coach. No, just look at the additions this team made on the offensive side of the ball signing Robert Woods at receiver, Andrew Whitworth to give their young QB a real left tackle, John Sullivan at the center position, drafting Cooper Kupp, Gerald Everett and Josh Reynolds to give Goff more weapons on offense for now in the future and of course making the extremely bold move to trade away a solid cornerback in E.J. Gaines and a second-round pick to acquire star WR Sammy Watkins. Moves like that make you better.

As for the Saints, the team made the bold decision to trade away star WR Brandin Cooks to New England for their first-round and third-round picks. The Saints ended up selecting Marshon Lattimore at the beginning of the draft to bolster the cornerback position and with the pick acquired from the Patriots, they selected the top tackle in the draft Ryan Ramczyk to bolster the tackle position. Instantly, just of those picks alone, the Saints added a stalwart on the offensive line in Ramczyk who will be able to man the right tackle spot for years and added who is now looking like the possible best cornerback in football a couple of years from now in Lattimore. With Cooks, it was a little addition by subtraction but it’s clearly panned out. That’s not all, however, the Saints also added another stud at safety in Marcus Williams which allows the Saints to deploy their former first-round pick Kenny Vaccaro as a safety that can play around the line of scrimmage which best suits his skill-set. On top of that, they drafted what was possibly one of the biggest steals of the draft in rookie star RB Alvin Kamara in the third-round that made their signing of Adrian Peterson useless. Drafting players like Alex Anzalone with Al-Quadin Muhammad will pay dividends down the road and the selection of Trey Hendrickson was huge especially now that their free agent Alex Okafor is out for the season.

So with all of that being said what do you need to know about this game? First off, the Saints quite possibly have the best offensive line in football. They are impressive in not only the push they get up front but just how athletic they are with their left tackle being Terron Armstead who is a physical freak, Andrus Peat who is a former first-round pick that has thrived at guard for this team, Max Unger who the franchise acquired for their former star tight end Jimmy Graham, Larry Warford who the organization signed via free agency and the right tackle Ramczyk. It allows the Saints to do a ton with the offensive line being able to frequently open gaping holes for the running back duo of Mark Ingram and Kamara. On top of that, it keeps legendary QB Drew Brees clean in the pocket and gives him all day to throw. They will be battle tested with the Rams defensive line up-front that has two forces in Aaron Donald and Michael Brockers that wreck the game. You can almost certainly expect Armstead at left tackle and Ramczyk at right tackle to dominate the struggling edge rushers Connor Barwin and Robert Quinn all game long so it will be up to the Rams interior lineman to make a play.

On the Rams offensive line, they are fully healthy and ready to go but there is a little concern after seeing what the Vikings did to them last week getting through and applying tons of pressure on Jared Goff who really paid the price for playing QB last week. This week the Rams offensive line will have to worry about two game wreckers in the form of Cam Jordan who has been dominant for years and hasn’t received the credit and the second-year defensive lineman Sheldon Rankins who has found his groove now fully healthy. The pressure will more than likely be on the Saints defensive line though with the injuries to Marshon Lattimore and Ken Crawley the defensive line will have a small margin for error and will need to get to Goff early and often to avoid a possible meltdown. Tyeler Davison and Trey Hendrickson will likely need to outmatch Rob Havenstein and Andrew Whitworth on the edge which will not be an easy task.

With the Saints receivers and as much talent as they possess with star WR Michael Thomas, Willie Snead, Ted Ginn Jr., Brandon Coleman and Kamara out of the backfield the Rams will be tested. Just like the Saints injury-ridden secondary, the Rams will be without their stud nickel cornerback Nickell Robey-Coleman so that means it will be up to likely Blake Countess to counter Ted Ginn Jr. or Willie Snead or even the 6-foot-6 frame of Brandon Coleman. Expect a battle between Trumaine Johnson and Michael Thomas all game long who have both had their ups and downs this season. Switching over to the Rams receivers the team will be without Robert Woods who is by far their most consistent and most productive this season so it will be up to a struggling Sammy Watkins, Cooper Kupp, Tavon Austin, Pharoh Cooper, Mike Thomas and rookie Josh Reynolds to make some plays to potentially break this game open. You could certainly see a good bunch of tight ends for the Rams in Tyler Higbee and Gerald Everett bully linebackers Craig Robertson and Manti Te’o if necessary.

Overall, I think you are looking at two really good football teams that no one wants to play come late January. I expect the running game of the Saints to have their way with the Rams defense early on but I also expect Wade Phillips to make adjustments and buckle down in the second half. We are looking at an exciting game but with Marshon Lattimore and Ken Crawley out, I think the Saints defensive line will be under way too much pressure to make some plays. I think in games like this you may see an incredible amount of blitzes and I could see coordinator Dennis Allen go that route in what would backfire into a Sammy Watkins touchdown. Goff threw three touchdowns against this team in the first half last year and the reason the Saints pulled away at the end was because of the over the top blitzing by coordinator Gregg Williams that left the Rams susceptible to being gashed for the big play. Also in that game, Greg Robinson the left tackle and Tim Barnes the center could not give Goff the time of the day to throw the ball in the second half. It’s a different team on both sides but more has been done to improve the Rams and as great as Drew Brees and that offense has looked, they do have two losses on their schedule. They have won eight straight but with the injuries, playing on the road and the opposing team coming off the loss they just came off of I expect the Rams to edge the Saints in this one.