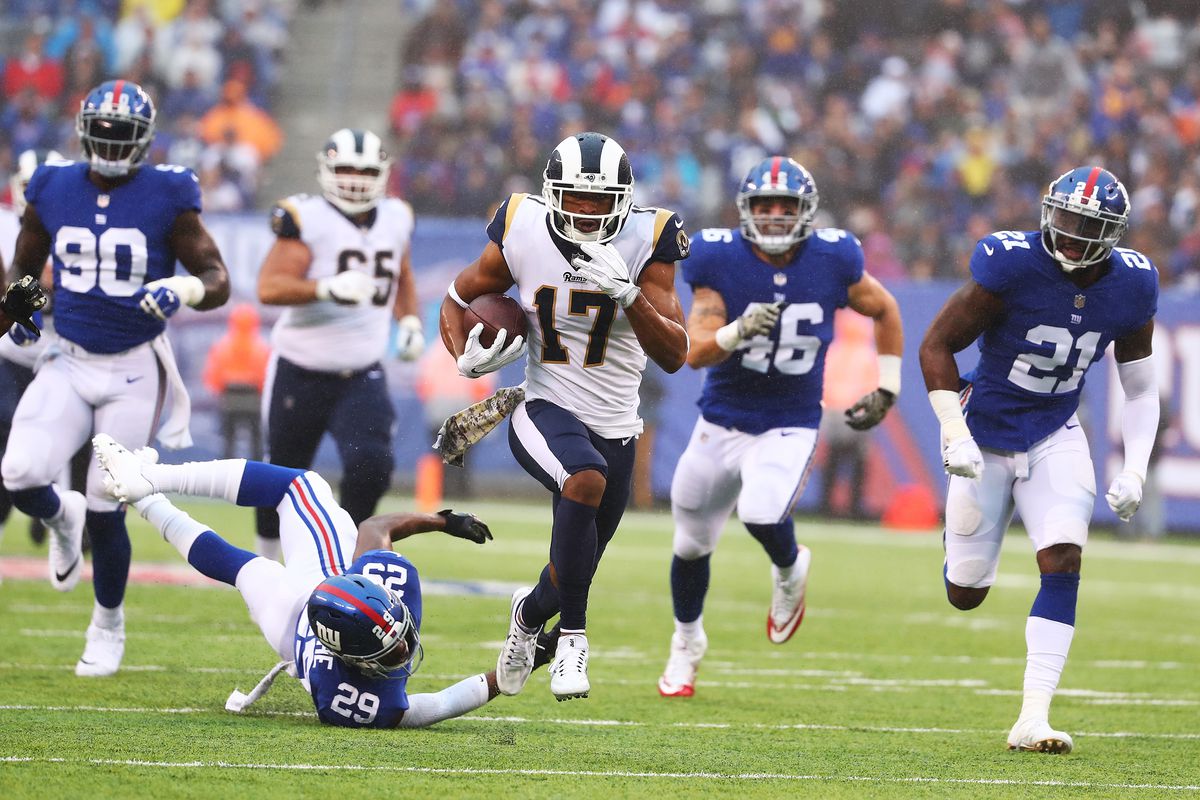 Last season the Rams had their first 1,000 yard receiver Kenny Britt for the first time since Torry Holt was in uniform. However, that translated to just a measly 4-12 record. For many, Britt looked like a must-sign but now the Rams are finding that letting go of their big-play receiver of last season has led to bigger and better things.

Now, this is not a let’s trash Kenny Britt piece because this is mainly about the impact of Robert Woods but as great as Britt looked on the stat sheet he severely lacked in certain areas, areas that Woods excels in. The Rams let Britt walk after cleaning house of pretty much all of their coaching staff. At the time for some it seemed puzzling that the Rams wouldn’t pay their top receiver eight million a year to come back but for others it was obvious. Britt was part of the old culture, the culture that was responsible for the Rams going 7-9 at best. He even proved he wasn’t part of the culture that Sean McVay has built long before the season started with an N.S.F.W. (Not Suitable for Work) rant about his former teammate Tavon Austin. With the Rams and McVay mainly implementing the “We Not Me” culture, there was clearly no room for a player like that.

The Rams did end up paying a receiver eight million annually over five years and that man was aforementioned Robert Woods. Woods, of course, is the anti-Britt. What do I mean by that? Team player, precise route runner, adamant blocker and someone that possesses smooth hands, something Britt simply did not have. Britt was for sure the Rams top big-play receiver last year but Woods has stepped in and has filled that void in no time. So why make a big deal over Woods and not make a big deal over Watkins? The answer is simply that Woods is the guy, he’s possibly turning into a star that he was always thought to be coming out of USC. He wasn’t utilized as much as he should have been in Buffalo and he is clearly proving that in Los Angeles playing pretty much in the confides of his old home which has become his current home.

So let’s cut to the chase, why is Britt fools gold? He had a good year and maybe I am too hard on him. Perhaps. However, what if I told you that the same 1,000-yard receiver has been a non-factor after signing in Cleveland. Britt only has 166 receiving yards on the season, two touchdowns and has a terrible 38.7 catch percentage. Woods, on the other hand, had less of a contract year and this season he is at 622 yards (which is 78 yards away from being a career-high), four touchdowns and has a good catch percentage of 66.1. The fact is this, the Rams could have been fooled by Britt’s season last year and to be completely honest had they not canned Jeff Fisher and company Britt probably is still with the Rams and likely underachieving after being given a long term deal. Let’s also take into an account that he is four years older than Woods and has been way more immature off the field. Britt obviously has his woes back when he was in Tennessee that almost derailed his career in the first place but on top of that he is a veteran wide receiver that missed curfew for the Browns this year. He’s the same receiver that has been listed as a healthy scratch this season as well even on a winless Browns team.

Woods meanwhile is being praised left and right for his accountability that goes back to week two after he arguably cost the Rams the game versus the Redskins on a drop and a couple of penalties near the end of the game. Woods has also received rave reviews from his teammate that was also with him in Buffalo and has always been considered the star over Woods in Sammy Watkins. Watkins had this to say according to Alden Gonzalez of ESPN: “For me, it’s Robert Woods who’s leading this group. The way he practices, the way he plays the game, the way he does everything moves this wide receiver group.” Huge praise and obviously well deserved praise. Coach McVay has always been complimentary about Woods and raved about him when the Rams pulled the trigger to sign him and he is likely one of the best signings in the league from this past free agency class. Not Britt who doesn’t even have as many yards as the Rams rookie TE and sixth receiving yards leader Gerald Everett. Clearly, the Rams made the right move in moving on from Britt to Woods.

Let’s also keep in mind what Woods was signed to be… .a number one receiver. That was also long before the thought of Sammy Watkins (or at least our thought of Watkins) popped up for the Rams. Woods was expected to be the starter next to either Tavon Austin or Cooper Kupp at the beginning of training camp. He suddenly became the number two guy behind his old teammate he left behind in Buffalo in Watkins. Now, despite everything, despite the fact that maybe he isn’t 6-foot-3 like Kenny Britt. Despite the fact that maybe he isn’t a big and thick receiver that can break tackles like Watkins. Despite the fact that he does not have the speed that Austin has for the Rams. He is sitting atop of the team and he’s on pace for 1,106 yards receiving and seven touchdowns which would shatter his career-high. Yup, just like many doubted. Many did not believe. Robert Woods was not only not overpaid by the Rams but he is giving them more than they could ever ask for and for the same price as Kenny Britt is in Cleveland giving you less than 200 yards receiving and knucklehead decision making at five years older.

You may not have Calvin Johnson, Julio Jones, Randy Moss or any totally dominant 6-foot-4 receiver at your disposal in Woods but you do have a reliable, hard-working, high-motor, intelligent, exciting and classy player donning Rams horns, wearing number 17 and giving young QB Jared Goff a star in the making in what is looking like the beginning of a special Hollywood story. It’s official guys, Kenny Britt was fools gold and could have broken the Rams but Robert Woods has been and is a legit number one receiver and one that will be available for years to come.