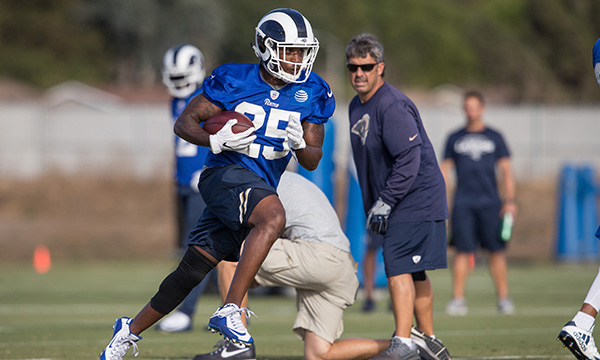 The Rams lost Malcolm Brown this week for the next few games with an MCL injury. The team just activated RB Lance Dunbar off of the PUP (Physically Unable to Perform) list and will likely deploy him as Todd Gurley’s backup tomorrow.

For Dunbar this is a breath of fresh air after signing a deal to come Los Angeles in the off-season. He has been unable to play at all and it dates back to early on in training camp. Now he will likely not only backup Gurley but even have a role in this offense. Head coach Sean McVay is known for his time with the Washington Redskins in which he used a running back in the similar mold of Dunbar, Chris Thompson. Thompson and Dunbar have a similar 5-foot-8 build and are smaller and shiftier backs that can make plays with receptions out of the backfield.

Without Dunbar, the Rams have been the best offense in football and adding him will likely help a team that is already firing on cylinders. The Rams had USC undrafted rookie free agent back Justin Davis at their disposal but they clearly were not comfortable just yet in putting the ball in Davis’ hands in a regular season game.

Keep in mind the Rams didn’t just bring in guys like this for nothing. Of the free agency aquisitions like Andrew Whitworth, Robert Woods, Connor Barwin and John Sullivan, all have played a legit role. There is no reason why Dunbar cannot do the same. We will see as the season unfolds but with Brown on the shelf for the next few games, this is Dunbar’s chance to show the Rams what they have and if they want to possibly bring him back for another year after this season ends.