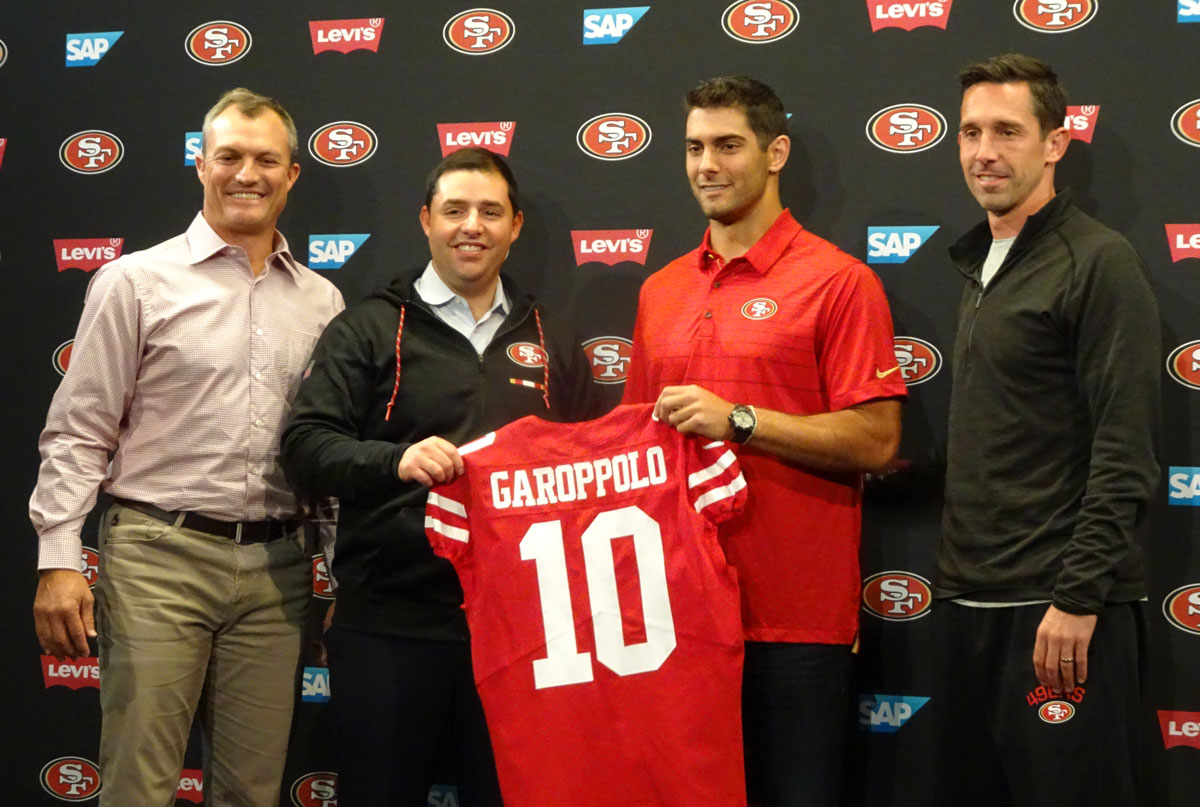 The 49ers and Patriots shocked the world Monday night after agreeing to terms on a blockbuster trade to sent franchise QB Jimmy Garoppolo to the San Francisco 49ers for a second round pick.

This came shortly after the Seattle Seahawks made a blockbuster deal of their own trading for a blindside protector for franchise QB Russell Wilson. The Seahawks acquired LT Duane Brown from the Houston Texans for what was at the time CB Jeremy Lane, a fifth round pick this year and a next year’s second round pick. That was of course, until Lane failed his physical thus reverting him back to Seattle and forcing Seattle’s hand to trade a third round pick this upcoming season. In turn the Seahawks upgraded left tackle in what was one of a small amount of holes the Seahawks had to fill and the 49ers upgraded QB from C.J. Beathard an overdrafted third-round pick for a quarterback that has been grooming and learning under Tom Brady in Garoppolo.

These two trade deadline deals shaped the NFC West a little bit but mainly the Garoppolo one. This is a QB that many compare to Tony Romo and then some push back and say he’s more so like Andy Dalton. Either way, the 49ers have their QB which opens up opportunities of plenty for the Rams all-time rival. The 49ers are sitting at 0-8 and with zero chance of making the playoffs (or a little more than zero) they are likely looking at a top five draft pick which gives them plenty of opportunity to revamp and re-tool this roster. General manager John Lynch and Head coach Kyle Shanahan have already proven they are not afraid of making big trades and this top first round pick could help them move down for a plethora of picks to possibly do exactly what the Rams have done in 2017.

Is it crazy to assume that the 49ers did not have much value for the quarterbacks in this upcoming draft class? Perhaps, maybe the 49ers loved Darnold but felt he would stay in school or maybe they loved Rosen’s talent but were bothered by his character or maybe even the fact that they felt this QB class was so deep they would not need to pick one that high. Who knows? What we do know is that the 49ers have a franchise QB and a lot of draft capital to play with. Sooner or later this 49ers team will be battling the Rams just like the old days for the NFC West title.

One thing though, when you move away from the 49ers trade and look at the Seattle Seahawks you see that the Seahawks are indeed in win-now mode and are clearly all-in. Duane Brown is 32 years old and yes the Rams do have an older left tackle but they did not give up a third-round pick in 2018 and a second-round pick in 2019 to acquire him. The Seahawks clearly see their window closing and feel the opportunity is now to strike on a deal.

Where do the Rams fall in all of this? Well, they didn’t get any better or worse by standing pat at the deadline. It’s probably something that might haunt GM’s overall when you stand there and refuse to make moves but the fact is that the Rams don’t have much room anyway and a trade might also cause a serious shift in chemistry. If it’s not broke don’t fix it. The Rams clearly stood by that mantra looking at their 5-2 roster and thinking that now is not the time to screw around with it. Sure, the Patriots could have used a Robert Quinn type of player as they make a final run at the Super Bowl, but so can the Rams who are surprisingly to many, well in the playoff hunt. The Rams will have opportunities to make their roster better after the season and this was likely a five year project regardless of immediate success with Sean McVay. The Rams are a good enough football team to win at the highest level and with everything starting to come together they were able to watch and not fret over the trade deadline. Also, don’t forget the Rams pretty much had their big trade when they made the move to acquire WR Sammy Watkins. They need to get him going, but once they do it’s only going to be even more scary for the Rams.

What are your thoughts? Do you think the Rams made the right decision to hold off at the trade deadline? Let us know!