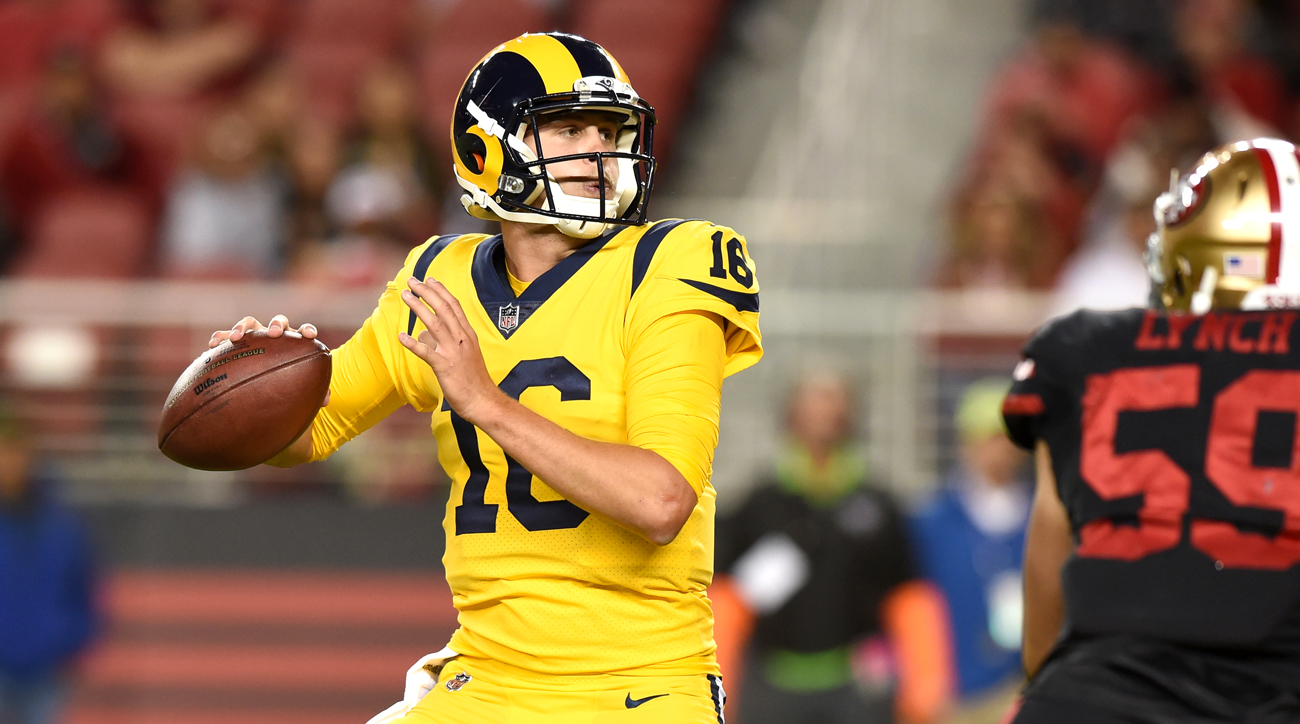 It’s hard to be considered a ‘bust’ after just seven NFL games, especially at the quarterback position, but the lack of faith in Jared Goff coming off his rookie season was overwhelming.

He lacked confidence, he turned the ball over nine times while throwing just five touchdowns and worst of all, the Rams did not win in any game he started. This all led to an offseason filled with one question: did the Rams make a mistake after trading up for the number one overall pick?

Enter new head coach Sean McVay. At just 31 years old, McVay would be the youngest head coach in the NFL by far, but he had the resume to warrant the hype. He had just helped quarterback Kirk Cousins to two highly productive and efficient seasons while also getting the best out of the likes of Pierre Garcon, Jordan Reed and Jamison Crowder.

The ideology behind the hire was clear: McVay could scheme players open, game plan on the offensive side of the ball as well as anyone, but most importantly develop a quarterback to reach their ceiling. This was the guy to salvage the career of a former number one pick before it was too late, no matter how early things fell apart.

Now, just how would he pull this off so quickly?

Let’s break down a few plays that have shown not only Goff’s progression this year, but how his coaches and supporting cast have aided him.

The play above is a perfect example of Sean McVay scheming a player open to make things easier for his quarterback. With a bunch set to the right (the ‘field’ side, which is the side with more room), Cooper Kupp is the target. The two other receivers on the field side clear out the coverage, leaving plenty of open space for Kupp to work back to for a short catch and longer run.

Kupp doesn’t possess high end speed, but he has reliable hands and upside to make something happen after the catch (Goff has a 95.2 quarterback rating when targeting him). The coaching of this design gets the hard part for him out of the way, which is generating separation. It also makes it easy on Goff by turning a one read, short throw into a first down.

Now let’s take a look at a not-so-easy throw:

Goff has options after the play-action on this throw. He first looks at his tight end, who gets by the linebacker and open in the middle of the field, but opts to make a tougher throw with bigger upside. That throw would be to running back Todd Gurley, where the ball leads him right between defenders with room to run after the catch.

This is a good example of Goff quickly seeing the field and making a near perfect throw for what ends up being a huge touchdown. He didn’t have the confidence or mindset to make this play as a rookie.

These are the plays where Goff shows why a team was enticed to trade up to the number one overall pick with hopes of him being their franchise quarterback. Here’s another one:

This is a near perfect ball to Cooper Kupp. While the rookie wide receiver has to climb high, the pass is kept away from the defenders and led into a space where only his target can go get it.

Goff’s numbers on play-action passes speak for themselves. According to Pro Football Focus he’s completed 35 of his 56 attempts (62.5%) for 565 yards (10.1 YPA) with a 102.1 quarterback rating. Teams are well aware of the threat that Todd Gurley poses and it’s supplementing the passing game for LA’s young quarterback and his new weapons.

Even mechanically, he looks like a much more confident and consistent thrower.

The biggest question after a 5-2 start and currently sitting in first place is can the Rams keep this up all year? It’s no secret the defense has game changing pieces, whether it’s all-world defensive lineman Aaron Donald, up and coming stud Lamarcus Joyner or their number one corner Trumaine Johnson.

The recipe to stay in first place will be for the offense to keep up their production, which currently has them sixth overall in rushing, 12th overall in passing and most importantly in first in points per game with 30.3. Goff has only thrown four interceptions while his defense has hauled in nine.

The offensive line, with a key new addition in veteran Andrew Whitworth, has only surrendered 10 sacks while their front has tallied 23 (according to Pro Football Focus they rank only 19th in pass blocking efficiency, but have still been a massive upgrade from last year’s disaster).

With the remaining schedule including the Giants, Texans, Vikings, Saints, Cardinals, Eagles, Seahawks, Titans and 49ers, the playoffs are far from a sure thing. With that being said, they’re playing efficient and productive football in nearly every facet of the game, even special teams where they’ve converted on 21 of 22 field goal attempts.

In just his second season, after a disastrous start in his rookie campaign, Jared Goff has done a complete 180 under new head coach Sean McVay. While there is a long road ahead, one that Los Angeles is hoping to include playoff football, the future finally looks bright for the Rams.

Connor Rogers works for Bleacher Report hosting the Stick to Football podcast with Matt Miller and writes for FanRag Sports. You can catch Connor on the Downtown Rams Podcast as well and of course follow him on twitter @ConnorJRogers.