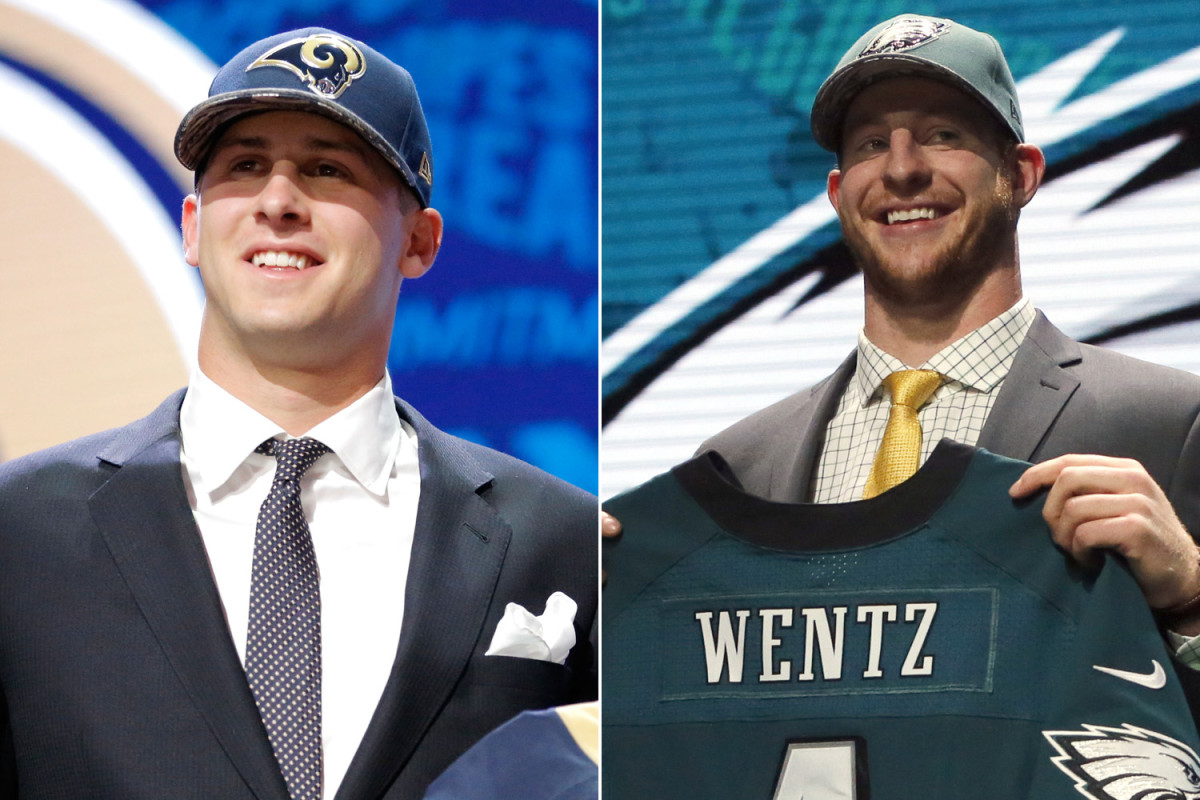 Isn’t it crazy? At one point the Los Angeles Rams had just traded ahead of the Cleveland Browns for the number one pick to take Jared Goff and right after that, the Philadelphia Eagles traded with the Browns to select Carson Wentz. Now, as the Eagles are 6-1 and the Rams are 5-2, the two teams are starting to look bound to battle for the top spot in their conference.

In just one year’s time that is crazy. However, you can see if you go back to last year at the beginning of the season Wentz had the Eagles rolling and especially showcasing their talent in a beat down of the Pittsburgh Steelers in which led to people dubbing the Eagle rookie QB as the next Big Ben. With Goff, on the other hand, it wasn’t ever the way he wanted. First off, he sat the entire first half of the season behind journeyman QB Case Keenum and watched the Rams go from 3-1 to 4-5 until he eventually took over. Goff would then go on to lose the next seven games in what was a disastrous “worst case scenario” type of season for the Rams, their fans, their coaches, the organization but most importantly Jared Goff.

Now fast forward a year later and even after Goff went 0-7 last season, he has had the benefit of a new coaching staff, a revamped passing offense and offensive line to keep him comfortable in the pocket and give him weapons to take the load off of star RB Todd Gurley. Meanwhile, Wentz has spent another year under the same coaching and has acquired plenty of new weapons on offense to succeed. Now, both teams are clearly taking advantage of what they have, it looks at times Goff might be a little more limited than Wentz, but you have to remember that Wentz, of course, is going into his 24th career game in the same offensive system. Goff just so happens to be about 10 starts behind him, not to mention Goff was younger than him coming into the draft anyway.

It hasn’t been just the quarterbacks though, these teams are for real and play well on all three levels of the game. With the Eagles defense improving every week and waiting on their prized trade acquisition CB Ronald Darby to return while the Rams defense continues to learn Wade Phillips 3-4 attacking based scheme, the teams are only building each other up. The Rams have the best point differential in the league and have almost scored as many points through half the season as they did all of last season. With the Eagles last year, they had something. Sure, they tailed off big time and so did Wentz after start RT Lane Johnson was suspended but the Rams literally only had that 3-1 start going for them which was a total anomaly. Now, you have had a culture change and serious coaching out of the likes of Sean McVay, Wade Phillips, Aubrey Pleasant, Aaron Kromer, John Fassell and Joe Barry among others that continue to improve the player discipline that was clearly lacking last year and the overall player development that was severely lacking.

These Eagles and these Rams are not perfect by any means as the Rams still are near the bottom of the league in red zone offense and the Eagles secondary is still suspect. The bottom line is this, in a season without Aaron Rodgers leading the Green Bay Packers, the Seattle Seahawks taking a significant step back and refusing to upgrade their putrid offensive line and the NFC champion Atlanta Falcons of a year ago losing their elite offense after letting their offensive coordinator and QB coach leave. This conference is waiting for a new king and the cities of Philadelphia and Los Angeles are going to likely battle for that right this season. Luckily for us and the league, these two play week 14 in a game that could have both teams playing at their best. That’s the thing now when you really think about it, these teams are top three in the league and have yet to completely tap their full potential. We could be looking at the most improbable NFC championship to date. If both of these teams keep up the consistent success this will be a fun new rivalry the NFL has been in need of for a while.