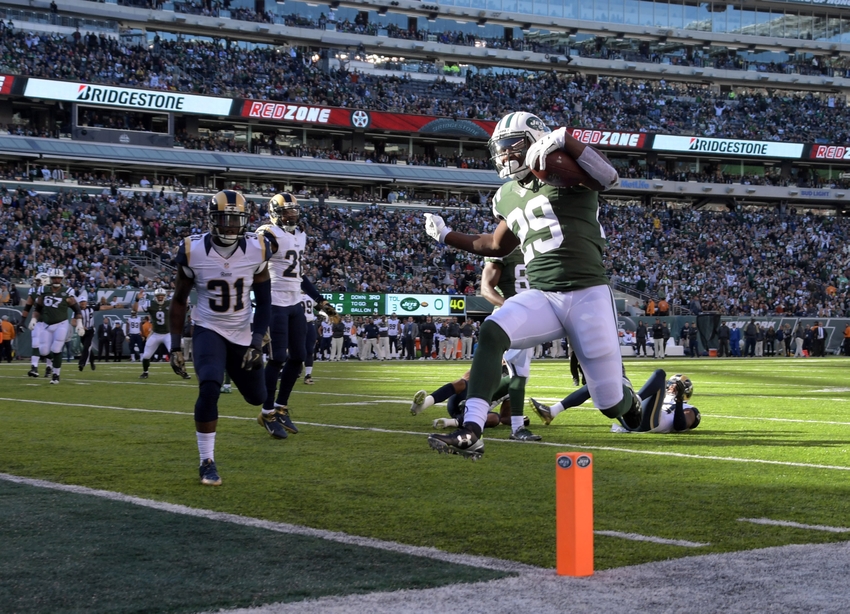 The NFL trade deadline is at 4 PM eastern time on Halloween and while the Rams may not have many needs they could possibly add another pass catcher out of the backfield.

He may not be the biggest name in the world but Bilal Powell has been dynamic with the New York Jets. Powell has accumulated 2,571 yards rushing on 584 carries for 12 touchdowns and 1,359 yards receiving on 183 receptions and four touchdowns. He is not been the starter as he has been playing behind the likes of Matt Forte, Chris Ivory and Shonn Greene. However, Powell’s usage has started to increase and has shown New York that he is in fact a weapon out of the backfield. He had a career high 58 receptions a year ago and has had a nice start to the new season relieving starter Forte of his duties while recovering from injury. Due to the fact that Powell has been playing well the Jets might want to strike while the iron is hot and trade the 29-year old back to a contender before the Jets 3-2 start goes down the tubes. The Jets have Forte when he comes back and on top of that they drafted RB Elijah McGuire out of Lousiana Lafayette in the sixth-round but seriously, let’s not kid ourselves. The Jets are not going to the playoffs this season and are going to have to play a tough schedule the rest of the year. Trading Powell at the deadline makes too much sense for a rebuilding team.

So why would the Rams want to trade for Powell? First off, the Rams offense is led by Sean McVay who is known for using multiple running backs. Sure, Tavon Austin has been utilized in the backfield and they have Malcolm Brown but what Powell has been able to do in New York could help the Rams big time adding another security blanket for Jared Goff. After all, the Rams were high on getting a pass catching back like Powell and they proved that this off-season giving Lance Dunbar potentially three million dollars for one year. Powell would offer more than Dunbar for a little more money. The Jets RB will be set to become a free agent in 2019 which would give the Rams their change of pace with Gurley for the next two years. Dunbar hasn’t been able to stay healthy and six weeks in the Rams still haven’t received word on Dunbar playing this season. If Dunbar doesn’t play this Sunday (and he won’t) he will have missed his 31st game of his NFL career.

Powell would likely cost the Rams a sixth-round pick or seventh-round pick or maybe even a conditional pick and would be a smart move for the team. The Rams were banking on Dunbar being the third-down scatback and that hasn’t panned out so having Powell who is more of a veteran with more experience and production it could be one of the little things that makes a huge difference as the Rams make their postseason push. Powell is currently ranked as the 28th RB in the league per Pro Football Focus.

What are your thoughts Rams fans? Do you think the Rams and Bilal Powell are a nice fit to help out Todd Gurley and Jared Goff? Or do you think the Rams should stay the course and wait until Dunbar comes back or even just settle with Austin as the third-down guy. Let us know!