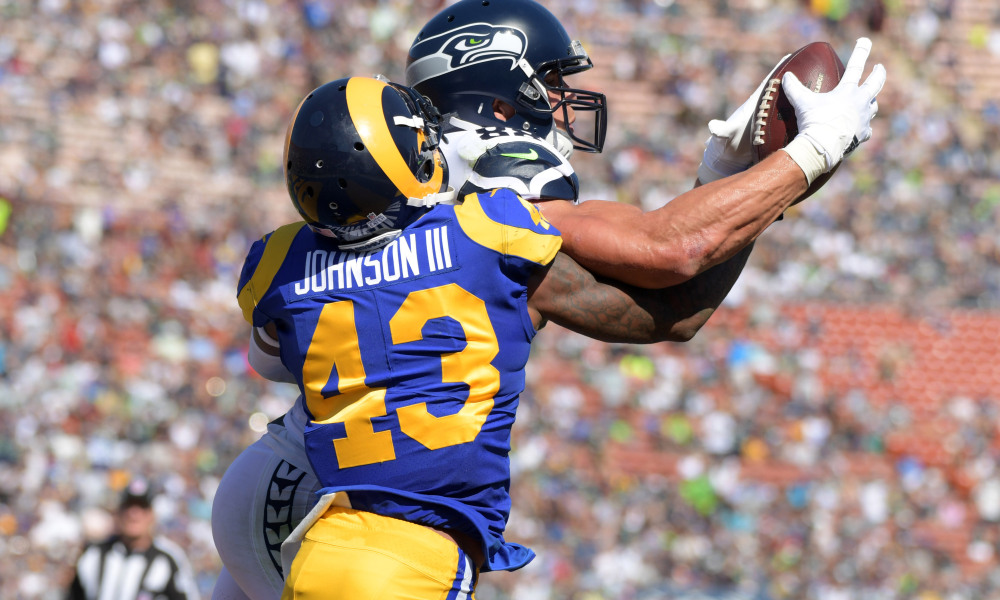 After the biggest heart-breaker of the season the Rams ended up with a crushing loss but may have found something in their young Safety and Tight end.

Overall the Rams defense for the first time since week one put together a complete four-quarter game in which they gave their offense a golden opportunity to beat their biggest rival the Seattle Seahawks multiple times. L.A.’s defensive face of the franchise Aaron Donald (96.8 grade) continued to put pressure on Russell Wilson and the Seahawks backfield racking up a whopping 10 pressures, two tackles for a loss, three QB hits and five total tackles. Next up the Rams ILB Mark Barron (86.8 grade) dominated the team in tackles with 15 including one for a loss and a hit on the QB. The secondary seemed to have had their best game as a whole. Led by the two unlikely safeties Cody Davis (88.4 grade) and John Johnson (88.2 grade) the Rams suddenly looked like the secondary threat many expected them to be with Maurice Alexander and LaMarcus Joyner. Instead, neither played and the non big-named starters on Sunday looked like a legit duo in the back end of the secondary. Lastly, we finally saw Wade Phillips’ guy he brought over from Denver CB Kayvon Webster (86.5 grade). Webster has been waiting for his time to shine and this Sunday despite the loss, Webster was fantastic. He had been held back at the first quarter of the season with some injuries but now you can really start to be optimistic with Webster moving forward.

“When you go up against the Legion of Boom, you find those windows that little bit smaller than you’re used to. Goff, who came into the game completing 66.7. percent of his passes, was off target throughout, unable to challenge the aggressive Seahawks coverage unit consistently. He was unfortunate with both of his interceptions to some degree, but he just wasn’t accurate enough, especially outside the numbers. There he completed just three of 14 passes thrown further than 10 yards down the field and beyond the numbers, a figure that is not good enough.”

“His blocking may not inspire confidence, but a career day by Higbee showed another weapon developing in this young and exciting Rams offense. His ability to work the middle of the field and down the seam in particular could really a dimension to this attack, and caused Seattle a lot of problems. His 3.63 yards per route for the game were the fourth-most of any tight end this week.”

“In what was a dominant matchup that many predicted, Donald absolutely manhandled the Seattle offensive line all game long. He made three solo run stops that contributed to his 94.9 run defense grade. Then he racked up two quarterback hits and eight additional hurries rushing the passer. That led to a pass-rush grade of 91.7 for the game.”

“Davis was impressive all game long for the Rams defense, as he helped keep the Seahawks passing game under control. Davis was only targeted three times as the primary coverage player, but he didnt allow a catch and had one pass defense and an interception. He also added three solo defensive stops which helped lead to his second-highest grade of the game.”

In conclusion PFF clearly saw what we saw during the game. Sure, Goff may have a lower grade than many feel he should have but he still did have a lower than 50 percent completion percentage. The last drive might have been the reason Goff’s grade climbed as he had a 45.2 overall grade in Dallas last weekend. The offense clearly took a step back this week, while the defense rose up to the occasion and ultimately gave the team a chance to win. The Rams will need to turn it around next weekend against a better defense in the Jacksonville Jaguars that forced five interceptions on Ben Roethlisberger. Nonetheless the Rams have some silver linings even after a brutal loss like the one they suffered at the hands of Seattle.