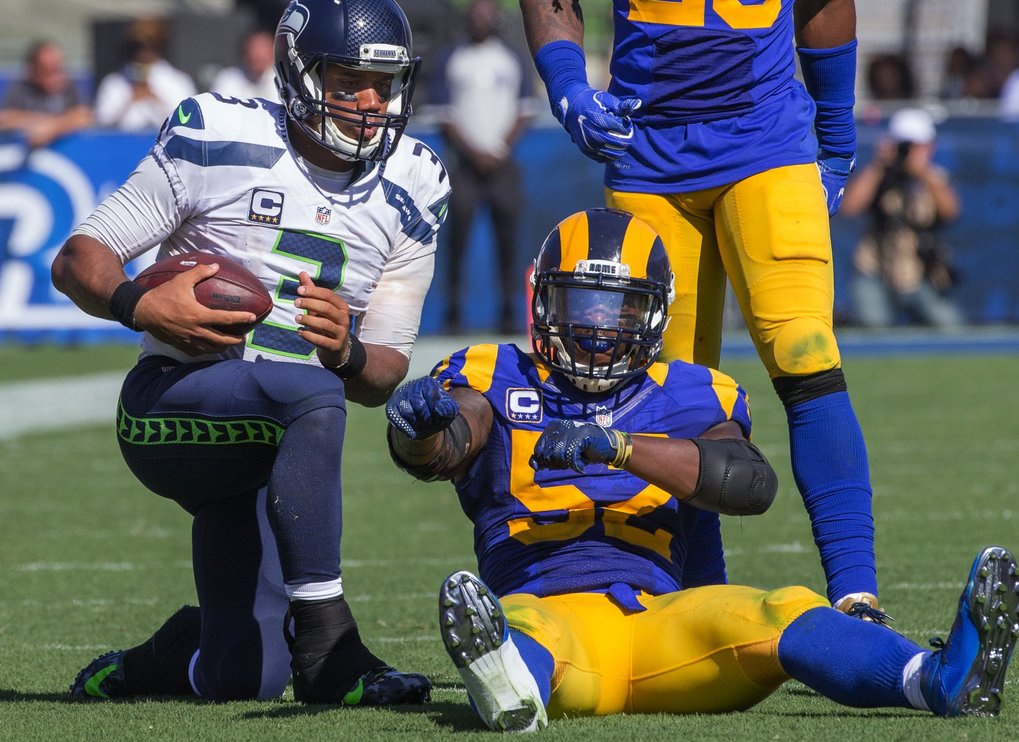 This Sunday two teams that flat out hate each other will square off in a divisional rivalry game that just happens to mean as much as it has ever before.

The Rams are riding a nice two-game road win streak and the momentum of being the best offense through the first four games of the season. Where as their rival and opponent the Seattle Seahawks are coming into this contest the Seahawks looked to have found their stride to a mild degree and the confidence should be riding high after destroying the Colts on Sunday Night Football.

The Seahawks always struggle against the Rams, that’s been a trend that has gone one for awhile now but that was with less talented teams. This Sunday, Seattle is likely playing the best Rams team they have seen in over five years. The craziest thing is that the Rams aren’t just the best offense so far but they are the best offense by far and that is proven based upon their 35.5 average scoring output. That may have a lot to do with rookie Head Coach Sean McVay and revitalized sophomore QB Jared Goff but it’s been an overall group effort.

Russell Wilson will still have to face a nasty defensive front led by monster defensive lineman Aaron Donald and Michael Brockers who have given him trouble in the past. The Rams defense have registered 12 sacks, 11 tackles for a loss and four forced fumbles, Seattle just has happened to give up almost exactly that much to defenses this season. The Seahawks offensive line is going to be a real problem for themselves in this one.

Goff on the other hand will be going up against his toughest test this season in playing a legitimate defense. The Seahawks are starting to get a little more healthy now but DE Cliff Avril has been ruled out, CB Jeremy Lane is doubtful and LB Michael Wilhoite is questionable to play. That means that rookie CB Shaquill Griffin will start across from All-Pro CB Richard Sherman. Griffin was picked on quite a bit last week by second-year QB Jacoby Brissett so the same should be expected with Goff. The Seahawks corner Sherman is absolutely expected to shadow the Rams star wideout Sammy Watkins which could open up opportunities on the other side of the field and over the middle of the field likely for Robert Woods and Cooper Kupp.

As for the Rams defense, they are looking to get on track and potentially build off what was an interesting turn of events after they made adjustments at halftime to beat the Dallas Cowboys. Wade Phillips’ crew have allowed 387 yards of total offense per game and 151.5 of that have come on the ground. Against a group of running backs like Eddie Lacy, Thomas Rawls and J.D. McKissick, we could see this run defense start to improve in a big way.

The Rams key to victory relies on giving their young QB Goff some time to throw the football. If Goff has a relatively clean pocket the Rams should win the football game but even so, the Rams quarter of the season MVP candidate Todd Gurley could be primed to blow open this game as the Seahawks have been unable to stop anyone on the ground themselves giving up a total of 134 yards rushing per game.

Overall, both teams are talented and are likely going to be battling all season long to win the division. Both teams have a QB, fierce defense and a great Head Coach. With the Rams playing in Los Angeles for the first of two matchups against the Seahawks, they should be the favorite to win this game. I, myself, have the Rams pulling off a 33-22 win headed to Jacksonville at 4-1 on the season.