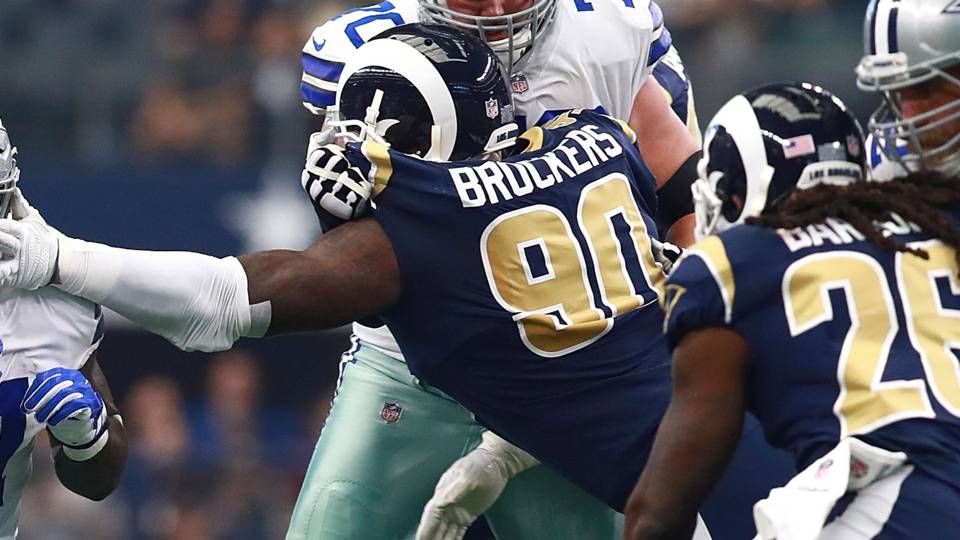 In what was one thrilling game to remember for the Los Angeles Rams, many upon many of Rams stood out. Some didn’t but Pro Football Focus graded the ones that did.

The Rams defensive line faced their toughest test of the season going up against what many call the best offensive line in the league. DE Aaron Donald (89.8 grade) racked up the highest total of QB pressures of any defensive player on the season with nine. DT Michael Brockers (84.8 grade) is turning into quite honestly one of the best defensive tackles in the game. Brockers ability to bat down passes at the line of scrimmage and his nonstop motor were not welcomed by Dak Prescott. Meanwhile on the offensive side of the ball LT Andrew Whitworth (81.9 grade) has only allowed one QB pressure all season and has proven so far he was money well spent. TE Tyler Higbee (81.0 grade) excelled in the blocking department and found himself targeted quite a bit deep downfield for what was likely his best complete game of his career. When the Rams found out that LaMarcus Joyner was going to be unable to suit up on Sunday the need for a starter grew. Even though third-round pick S John Johnson III (80.8 grade) didn’t start in his place, he was able to record some great plays on special teams and make a touchdown saving tackle on Ezekiel Elliot.

“Goff had some good plays, he had a 128.6 passer rating on throws coming from a clean pocket and his touchdown throw down the seam to Gurley was a thing of beauty. But offsetting that there was the bad: he had just a 39.6 passer rating on throws coming under pressure, completing just 3-of-11 passes for 16 yards while under duress and he nearly threw Dallas back into the game late with a ball that should have been intercepted by Anthony Brown.”

“After three down weeks to start the season, Higbee had easily his best game of 2017 in Dallas. He only hauled in three of his six targets for a total of 47 yards, two of those catches picked up first downs though and the third was a nice grab right on the sideline to get the Rams into field goal range at the end of the first half. To go with that Higbee also put up an above average 80.7 run-blocking grade.”

“Donald simply does not miss a beat; even against one of the league’s best offensive lines Donald was at his best, wreaking havoc against run and pass. His nine pressures were his most of the season so far and one of the only plays that got away from him was one of those 9 pressures where he fell off a sack on Dak Prescott, allowing the Cowboys’ signal caller to spin away for a third down.”

“This was far from a one man show on the defensive line this week for the Rams. With Tanzel Smart taking the snaps at nose tackle, Brockers played over the Cowboys’ guards and tackles and in his most productive display as a pass rusher (1 sack, 3 hits, 1 hurry) since Week 14 of his rookie season in 2012. Brockers even added a pair of batted passes as well, after four weeks he is only one pressure shy of matching his pass-rush production for the entire 2016 season.”

In conclusion PFF may not have liked Jared Goff’s play as much as we did. Let’s look at the facts so far, first off, the Rams are 3-1 heading back home, the offense is scoring at will and for the defense, it’s just a matter of time until something clicks. Regardless, there is a lot to like early on as a Rams fan.