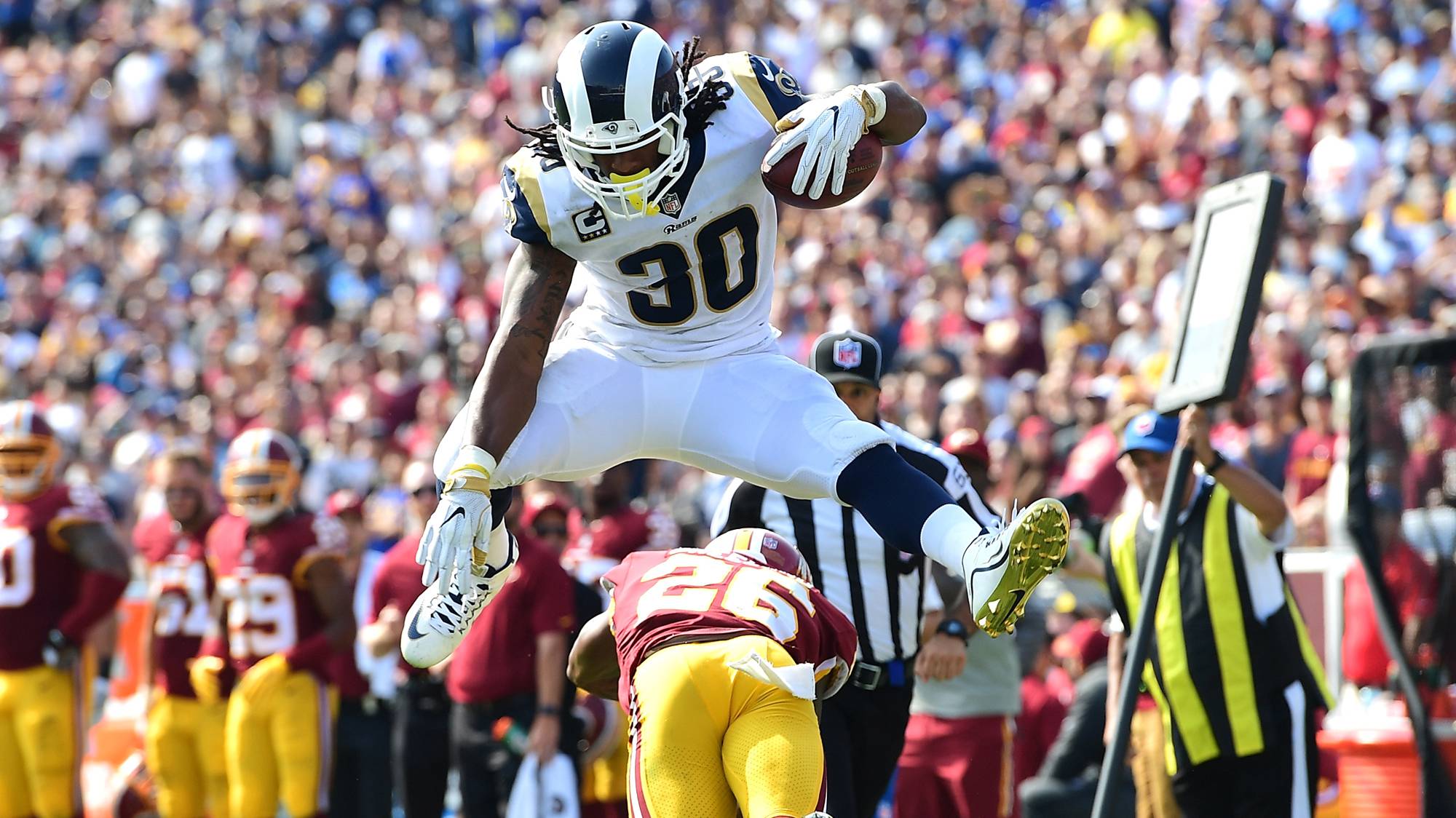 Overreaction Friday much? Todd Gurley? The best back in the league? Really? Look, I get it, it’s not exactly the smartest thing to rave about a running back that doesn’t average over four yards per carry for his career however, he’s on a ridiculous pace this season.

Think about this. LeVeon Bell is off to a slow start, David Johnson will miss more than half of the season and the only back that is looking more dominant than Todd Gurley is a rookie that no teams have tape on. Yes, I love Kareem Hunt, had him graded very highly but he’s surely not going to continue his dominance like this once teams learn to game plan for him. It’s early, but Gurley is on a pace to record 1,285 rushing yards, 21 rushing touchdowns, 69 receptions, 747 receiving yards and 11 receiving touchdowns.

Yeah, that is highly unlikely he finished with a total of 32 total touchdowns, but with the way the Rams are rolling it’s hard to say it’s impossible like last season. Gurley last season? Was unable to eclipse 100 yards once in any game and he didn’t even get over the 1,000 yard mark. On top of that fans were calling him a bust and forgetting his magnificent rookie season. Quite the opposite of Melvin Gordon who is a fellow first-round running back from Gurley’s 2015 draft. Gordon it seemed like many threw away his rookie season after an elite looking sophomore season. All these two did was have a flip flopped bunch of two years. Now, Gurley has made a statement and with improvement on the offensive line the sky is the limit.

You do realize it was the receiving plays that Head coach Sean McVay drew up that got Gurley going and ultimately built up his confidence. The resounding narrative has been that fans and analysts did not know Gurley could make plays catching balls out of the backfield like he has. It’s hard to really blame them. If you go back to his time at Georgia, Gurley only caught 65 receptions for 615 yards and six touchdowns. Gurley has already eclipsed that in his NFL career not even three seasons in with 77 receptions, 655 yards and two touchdowns. He certainly has not been the back Arizona Cardinal star David Johnson has been. Johnson in about the same amount of time has 122 receptions for 1,404 yards and eight touchdowns. Perhaps in what is a much more modern day NFL offense under McVay, Gurley will be used like Johnson is in Arizona. Don’t get me wrong the Jeff Fisher coached Rams used Gurley a bit in the passing game, but what we are finding out with this season is that he clearly wasn’t used enough.

Gurley’s ability to receive out of the backfield and make impressive runs or rather hurdles after the catch has given young QB Jared Goff not only a safety blanket, but a real dynamic and reliable weapon. Gurley before this season had never received for a touchdown, but now in only three games McVay has Gurley with two receiving touchdowns and his only two of his career. Let’s be honest, Gurley probably didn’t even know what he was supposed to do. He’s a dynamic ground and pound back that can get to the second level with his elite speed and has the strength to run head on into linebackers and safeties alike, but what we have all learned is he is also really good once he makes that catch and is able to survey the field and telegraph his moves accordingly. The offensive line isn’t great yet and might never be with a 35-year old Andrew Whitworth seemingly holding down the fort at left tackle, but you are at least showing that this improvement on the offensive line has been enough to give Gurley his confidence back.

Now, just factor in the way Goff has played through three games. He has a 70 completion percentage and is dynamic in the red zone, that is just allowing things to open up for Gurley. Think about this, all of last season, Gurley was stuffed sometimes right as he was getting the ball handed off to him. This season however, teams started it off keeping eight or nine men in the box to stop Gurley and make that the top priority. The problem with that was that it opened up serious opportunities for a talented QB Goff to pick apart the defense. Now, with the way Goff threw the ball last night and with the way Gurley ran the ball, the Rams are not a one dimensional offense anymore. There is no more lazy preparation. With McVay and LaFleur you are going to have to study the tape and really do your home work on this Rams team. Now, if Gurley continued to look off like last season that would be a different story and we might be talking about starting Justin Davis for gods sake. As of now Gurley is a hot topic around the league and so are the Rams.

The confidence only has to be building moving forward for the Rams and especially Gurley. What you have to love about this player is the fact things got tough for him, you saw him battle back from a torn ACL and still end up being selected in the top 10 of the NFL draft. You saw him struggle to get onto the field until he was healthy in week three which ended up being a rough outing. You then saw Gurley bounce back and set the world on fire against an undefeated Arizona team. You have seen the good, you have seen the bad which was all of last year. No matter what has happened Gurley has continued to fight hard and he holds himself and everyone else accountable for what goes on. Gurley has not been shy in calling last year’s offense a “high school offense” and he wasn’t shy in saying how the Redskins game that resulted in a down-to-the-wire heartbreaking loss would have been a blowout last year. Gurley wants to win, he’s a captain for the second straight season, he’s bought into a new coach even though it’s not the coach that drafted him and he’s back to being the star the Rams and the city of Los Angeles have been waiting for and need.

Make no mistake about it, Gurley hasn’t had Tom Brady under center, he hasn’t had the offensive line Ezekiel Elliott has been lucky enough to run behind, but Gurley has continued to battle with what he has had and now there is a feeling that he is not only back into the elite category of backs, but he could be only just beginning his evolution and his ascension as the top overall running back in the NFL.