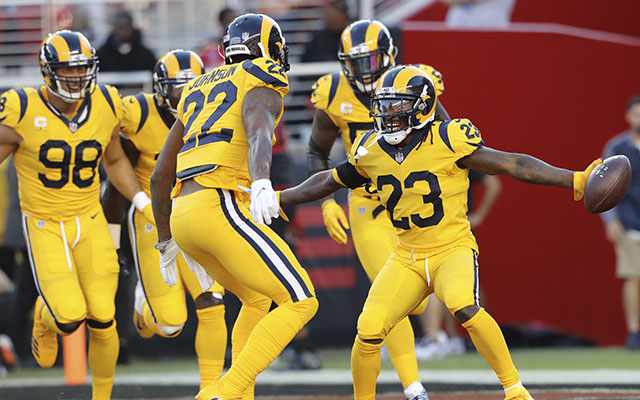 Pro Football Focus has graded every top five players on each team for every game. Rams cornerback Nickell Robey-Coleman graded the highest in last night’s game versus the 49ers with an 86.5 overall.

On top of Robey-Coleman who had a bounce-back week, ILB Alec Ogletree (85.1) and WR Robert Woods (84.8) also had bounce back weeks. Woods went over 100 yards receiving in what was his big time coming out party with his new team. Michael Brockers (84.3) couldn’t dodge injury today, but he was able to continue coming back on the field and making plays including an interception he recorded off of a deflection on the two-point conversion attempt. One of the big headlines was superstar WR Sammy Watkins (83.8) who also had his coming out party in L.A. Watkins broke out in a big way with two scores and over 100 yards receiving,

“Goff had a solid game, and he orchestrated the offense well. He was 22 of 28 for 292 yards and 3 touchdowns, including going 4 of 8 under pressure for 89 yards. Goff was 5 of 6 using play action for 119 yards passing and he was also successful going deep, as he was 3 of 4 on passes thrown 20 yards or more yards downfield for 99 yards”

“Watkins caught all 6 catchable passes thrown his way for 106 yards and a pair of touchdowns. Watkins hauled in a deep catch of 47 yards and averaged an impressive 4.61 yards per route run. This is likely the type of performance the Rams were hoping for when they traded for him this preseason.”

“A name that nobody was expecting on this list at the end of the night would be Robey-Coleman. On the very first play from scrimmage, Robey-Coleman jumped all over a poorly thrown out route by Brian Hoyer and nearly returned it to the house. On the 49ers’ third drive of the game Robey-Coleman hopped on a fumble by backup HB Raheem Mostert. Robey-Coleman did give up one 56-yard deep ball to Marquise Goodwin, but finished the game with only two receptions allowed on four targets on 45 snaps in coverage, good for an 85.9 coverage grade.”

“Brockers, who doesn’t get nearly as much notoriety as his interior defensive counterpart Aaron Donald, had a superb night on the inside for the Rams. Brockers was extremely disruptive in run defense with five tackles, four being stops. His 87.4 run defense grade was easily the highest run defense grade of a offensive filled night.”

Who stood out for you in this fun contest? Let us know!