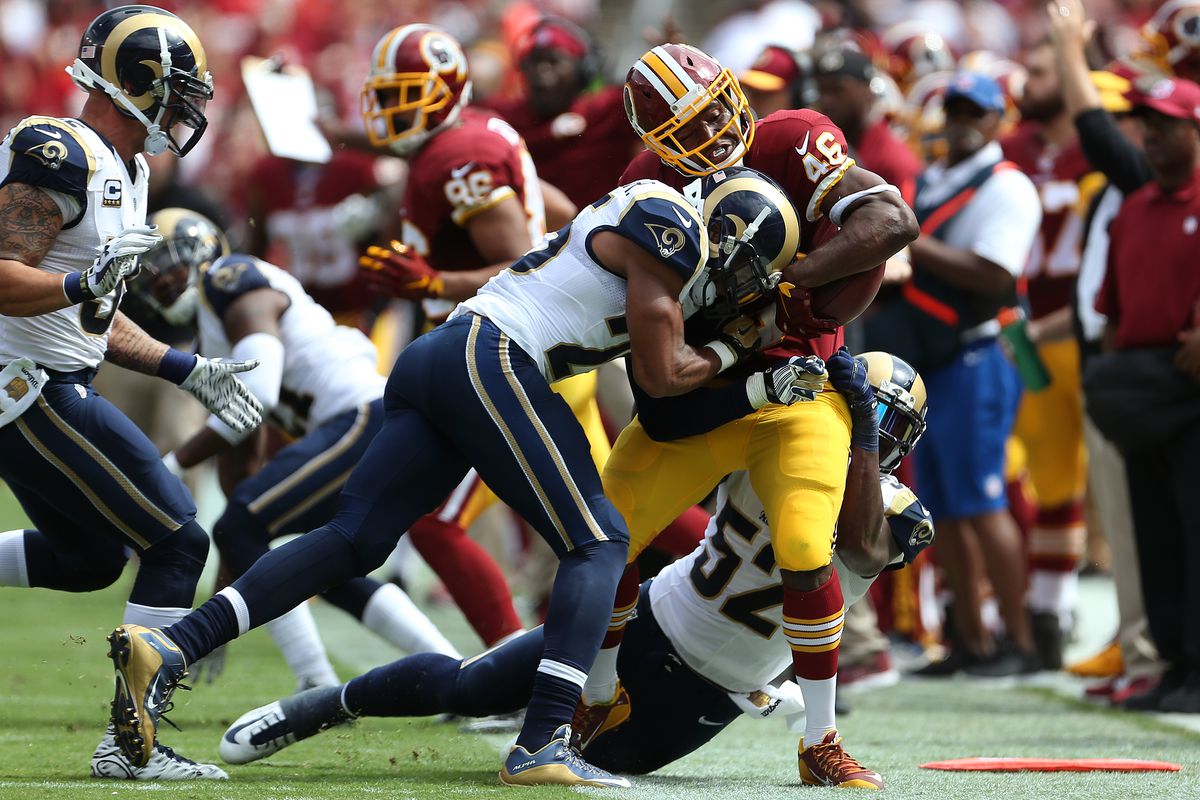 Week two of the NFL season is underway, and the Rams are preparing to take on the Washington Redskins. Who from this match-up should you consider starting in fantasy.

Gurley did not have the breakout rushing game that many expected and hoped for last week against the Colts, but he presented himself as a dangerous weapon out of the backfield by catching the ball. I fully expect the Rams to continue to make adjustments in the run game until they open the holes Gurley needs to show his explosiveness. Even if it is not this week, Gurley will catch several balls to make up for any lost production on the ground.

Cooper Kupp has gone from a sleeper to a must start. He has demonstrated both in preseason, and now in week one, to be a favorite target of Jared Goff. I expect his production to increase since last week. The Redskins defense struggled against the Eagles, but they are certainly better than the hapless Colts, and will seek to pressure Jared Goff, who can be expected to throw to his favorite target often.

Kirk Cousins is looking to bounce back from a week in which he scored a mere ten fantasy points. While deep passes were once a point of pride for Washington, he struggled to connect with his new receiving corps since losing Pierre Garcon and DeSean Jackson. The Redskins do not have a rushing attack, and certainly will not with Aaron Donald back, so expect Cousins to be slinging the ball around as quickly as he can. Cousins should only be started against this defense if your league is thin at quarterback.

Terrelle Pryor failed to excite against the Eagles last week, as Kirk Cousins often missed him on deep passes, but he was clearly Cousins’ favorite target with 11 targets. This week, they will connect on one deep pass, and Pryor will find separation in the middle of the field to make the Rams pay.

Jordan Reed might be nicked up, but the Rams allowed Jack Doyle and Scott Tolzien to make them look silly at times last week. If the Rams allow similar openings to the injured, yet supremely talented Reed, he will make them pay.

If you started the Rams defense last week, you were extremely please with the results. I certainly was. I recommend starting the Rams again this week as the Redskins offense has struggled to mesh, displaying a lack of chemistry. There is hardly a running game to speak of, so a Rams defense that is getting its best player back should be able to make the opposing offense one dimensional. Once the Rams make Cousins predictable, they will be able to get pressures and produce turnovers.

Chris Thompson is a boom or bust product in fantasy, as he functions as the receiving back for the Redskins. He caught 4 passes last week for 52 yards and a touchdown, but carried the ball only 3 times for 4 yards. The minimal rushing attempts does not bode well for predicting his future success, but he may find himself getting work this week as Cousins is forced to get rid of the ball quickly.

Robert Woods was not particularly productive last week, but this week might be his week. He did catch 3 passes for 53 yards, proving that he has the potential to break some big gains. I think Jared Goff finds Woods more often with Josh Norman shadowing Sammy Watkins, and getting Woods a chance to score a touchdown in the Coliseum for the first time since his days as a Trojan.

Despite Jared Goff’s great stat line a week ago, I do not believe there is enough tape to gauge his fantasy production going forward. It is also possible that I just don’t want to jinx it after one great game, but I would try to get Goff on my roster and bench him this week to see if he is the real deal or not. I fully expect him to spread the ball around, making all but Todd Gurley a mystery for fantasy predictions. WR Jamison Crowder and RB Rob Kelley might make some noise this week after being silenced a week ago by the Eagles, but their lack of production against an often suspect Eagles defense, does not give me any confidence. Good luck with your fantasy match-ups this week and come right back here with our fantasy reaction after the game and next week’s Rams @ 49ers Fantasy Outlook.