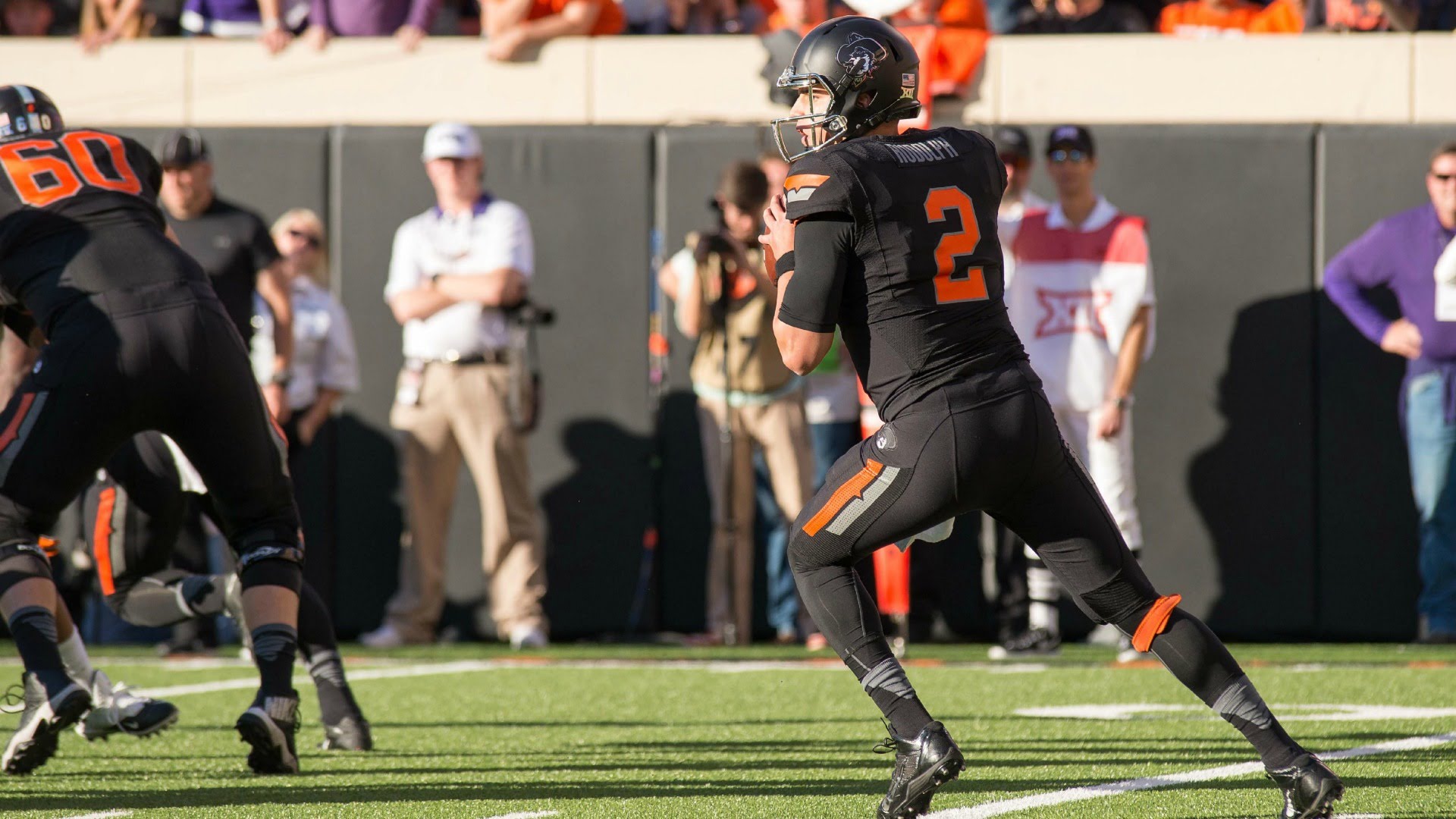 I will be starting a new series for the NFL draft coverage moving forward, it will be an ongoing series where we highlight one player that stood out to us or has been standing out to us on tape.

In this first installment of our new Draft Prospect Spotlight, I bring you Oklahoma State gunslinger QB Mason Rudolph. The Oklahoma State Cowboys have been led my a natural leader, a tough football player and now the all-time passing leader in school history. Rudolph is in his senior year and his most important year yet. After he surprisingly bypassed the NFL draft this past year, Rudolph left arguably a lot of money on the table to go back and learn and develop even more at school.

Rudolph has a lot to like overall, but there are some flaws that could keep him on the borderline of a first-round pick. There is hope he can correct it through the season and put the improvements on film, but of course, saying it and doing it are two different animals.

Things to love about Mason Rudolph:

Three year starter: Rudolph offers the ability that will put him in the more “NFL ready” category than other bigger named QB’s. Rudolph has shown ability to improve during his time in school. As for this season, it’s young and he hasn’t played any serious opponent, but Rudolph looks sharp as can be which is a good sign moving forward.

Size: Rudolph is a prototypical 6-foot-5, 230 pound QB that scouts will salivate over. Now, I am more about the fact size doesn’t always matter and that it’s not a skill, but the fact is when Rudolph has that type of frame team’s feel better picking him in the draft as he is likely to take more hits and absorb more contact with his nice size.

Toughness: Watch Rudolph’s tape if you don’t know how tough he is. Just watch it. Rudolph can be seen taking hits and either breaking tackles or even running defenders over as he plows his way into the end zone. For a starting QB in the NFL you need to be mentally tough and physically tough, Rudolph appears to be both which bodes well for him. Also Rudolph is not afraid to throw his teammate a block when needed.

Arm Velocity: Rudolph may not have the biggest arm and he might not be the fastest QB alive, but he throws the ball with a ton of zip on it. That’s a trait that is big for QB’s in the NFL. Often times you will see Rudolph go for a risky pass, but due to the fact he knows his ability and the fact he has that said ability, he completes the throw and makes it look easy. That sideline toe drag catch that teams love, well Rudolph can throw that out route to perfection and the same goes with the nice back shoulder fade he puts out.

Ball Placement: One thing I love about Rudolph the most is likely his ball placement. You can throw the ball 80 miles per hour, but if that ball isn’t where the receiver can make the catch it just doesn’t matter. I like the fact Rudolph will make that risky throw, but because of his aforementioned arm velocity and his ball placement the throw ends up being a success. The key with QB’s is giving their pass catchers a chance to make a play with their throw and when Rudolph puts the ball into the hands of others he puts it right out in front so that they can rack of yards after the catch simply.

Quick field processor: Whether you realize it or not Rudolph does a nice job of using his eyes to survey the field and pick apart defenses with ease. On top of that he does a nice job of using his eyes to bluff and look off safeties. He does it so quickly he may just look like he is a one-read QB, but if you slow the tape down he just does things at such a speed. Sometimes this can be a gift and sometimes this can actually be a curse. His ability to quickly survey the entire field gets him into trouble in another area of his game.

Nice mobility: Rudolph isn’t an all-world athlete, but he shows off a nice hustle when needed. It’s also worth mentioning that Rudolph is very smart about taking off. He is by no means a scrambling QB, he runs when that’s the best option and he doesn’t go and put the ball on the ground either.

Play adjustments: You will see on tape how many times Rudolph adjusts or outright changes the play at the line of scrimmage. It shows he is knowledgeable which is something you want to see out of a QB. Can he do that at the next level? I see no reason why he can’t.

Inconsistent deep ball: This is the exact reason you can’t judge a player off his highlight tape. If you watch Rudolph’s it would show you that he is a phenomenal deep ball thrower. However, when watching the tape you see that he shows flashes of being that, but he shows that he still needs a ton of work in this area. On tape you can see how he can nail star WR James Washington in stride for a deep touchdown, but then the next time he goes for the same pass play he under throws Washington so much that it hits the defender in the back. Rudolph absolutely needs to get better at that because when his deep ball is on point he looks exactly like Rams QB Jared Goff did at Cal.

Inconsistent footwork: This one kind of goes hand in hand with the deep ball. There are times Rudolph throws off his back foot and there are times he steps into his throw and delivers a beauty of a pass. Unfortunately those “times” can be far too consistent. He’s shown some serious improvement in 2017, but it is early. One can hope that Rudolph has improved enough that it’s not an issue anymore.

Throws on the run are too inaccurate to attempt: Sometimes Rudolph will roll right out of the pocket and look to make a big-time throw on the run whether it’s across his body or going against it. This is an issue for Rudolph as he can be seen on his film doing this and having it almost backfire every time.

Adapting to an NFL offense and playing under center: It’s not his time in the NFL yet, but Rudolph is going to need to adjust to the NFL speed as well as the fact that most QB’s are under center most of the time in the NFL. Rudolph is used as a QB in an air-raid styled offense which leads to a lot of high scoring games in college, but you really can’t run that type of offense in the NFL.

We will double back to Rudolph later on in the season, but it’s obvious. He has a lot of talent at the QB position, but needs to continue to show that he can improve moving forward. If he can prove such a thing, his chance of going in the first round becomes more likely. Can Rudolph get over the hump? I think he’s off to a great start which is for sure. We will see when the time comes for Rudolph. I definitely expect Rudolph to test well at the NFL combine, but we will see. Right now it’s best to keep an eye on Rudolph in Oklahoma State. Their games are fun and their QB is fun to watch too.