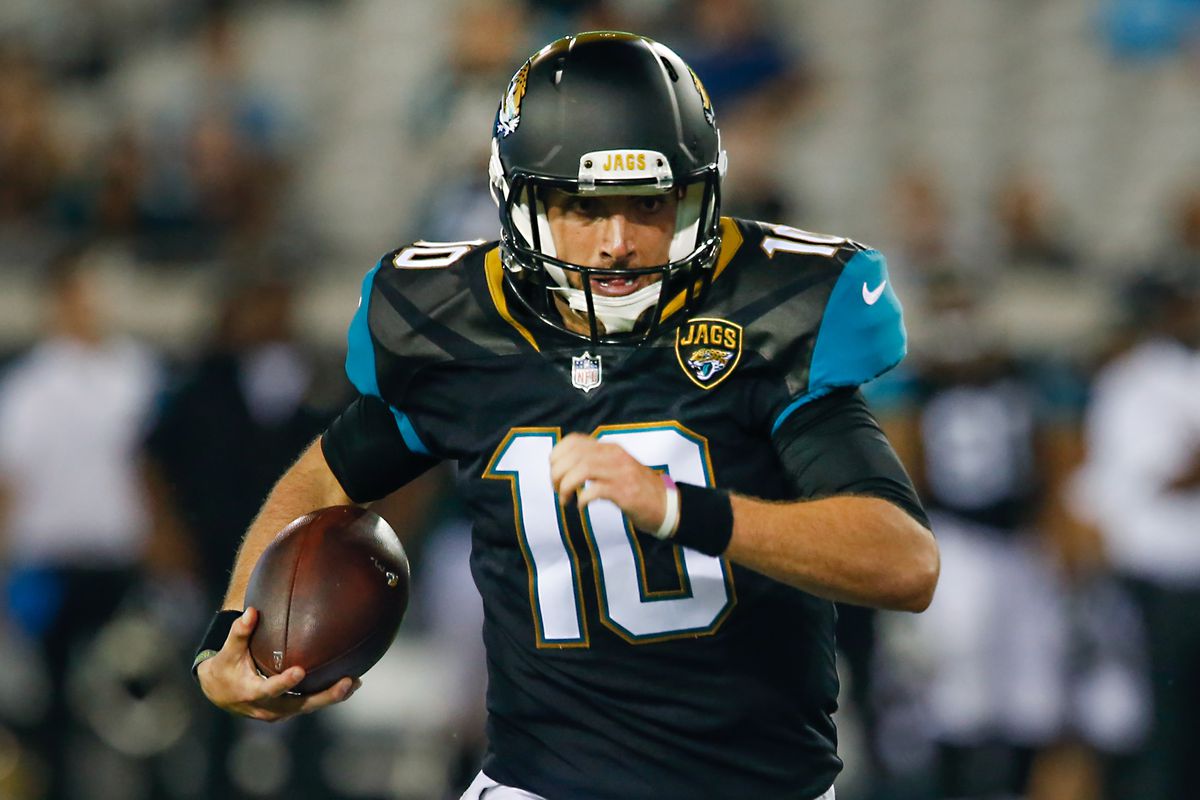 The Rams claimed QB Brandon Allen after the Jaguars waived him in hopes of Allen clearing waivers and putting him back on their practice squad.

Now, the Rams add a third quarterback to the mix behind former 2015 third-round pick Sean Mannion and 2016 first-overall pick Jared Goff. Brandon Allen is his name and you may know him just off the fact he was the guy that stretched his hands so he would have a bigger hand size measurement at the combine. Allen deserves to be known for more than that, but the 2016 sixth-round pick hasn’t been able to crack the starting job and of course won’t now after Jacksonville outright cut him from the roster.

Rams Head coach Sean McVay flirted with the idea of bringing in QB Dan Orlovsky as a veteran mentor after week one, but now it appears the Rams have gone ahead and have gone in a completely different direction bringing in a developmental third quarterback. Allen has familiarity with Rams QB coach Greg Olson and so it seemed like a combination of the familiarity with Olson and the tape Allen put out in preseason game the Rams the thought that Allen would be a nice acquisition.

Coach Olson spent time in Jacksonville as the offensive coordinator, so he obviously played a part in the decision to draft the young 24-year old quarterback last season. Now, with Olson joining the Rams he brings that same quarterback in who has some upside and has shown some growth going into his second year in the league. Since the Rams claimed Allen off of waivers they will assume control not only of Allen, but his contract as well. The Jaguars pay his bonus, but the Rams get a deal with Allen that makes him a Ram until the conclusion of the 2019 NFL season. What makes this interesting is the fact that backup QB Sean Mannion’s contract expires after the 2018 season.

Allen is a threat just off his talent alone to take over as the backup, but the financial flexibility, age and contractual longevity make it even more likely he takes over. Allen may not possess the big prototypical QB body like Mannion with his smaller stature at 6-foot-1 and 219 pounds, but he has some tools that make him a nice developmental project for his former coach Olson and Rams HC McVay.

When I went through the quarterbacks last season and I watched film on pretty much all of them, I actually found myself intrigued by Allen. I have never been one to care about size so that didn’t bother me like it did for everyone else. However, what I did care about was his ability to show he could lead men and he did that very well at Arkansas. He’s an effective passer on the run, but has shown his ability to adapt to more of a pocket passer style. One thing to like about Allen is his ball placement and it’s not just good it’s great and sometimes it’s top notch. Sure, he is still somewhat raw, but when he is given time he puts the ball right out in front of his receiver to continue the play. He has solid mechanics which ultimately allow him to drive the ball and make tight window throws and he has an understanding of what it takes to play quarterback and seems to have that “it” factor. When talking to draft expert Matt Waldman on our podcast he told us a quarterback either has it or doesn’t have it, Allen is a gamer and he has it.

One of the obvious problems with him is decision making at times. He can get a little too loose with the football and it showed up in preseason along with the great decisions he made as well. He still has a problem bailing on the pocket and turning to his legs to get him out of danger. He’s not a QB that will hang in there and take a big hit sacrificing himself for the perfect throw, instead he might take a big hit while he is on the move. Allen is not a finished product and it’s not really even close, but the best thing to do is get him working behind QB’s that can handle the game day operations at the position while he continues to work in practice and grow under the coaching staff and mainly his old coach Olson. If the Rams didn’t have any plan for Allen they wouldn’t have claimed him and probably would have brought in Orlovsky as a veteran presence like the original plan. However, the Rams clearly see enough in Allen to consider developing him as the backup behind Goff or maybe even someday the backup plan if Goff doesn’t pan out.