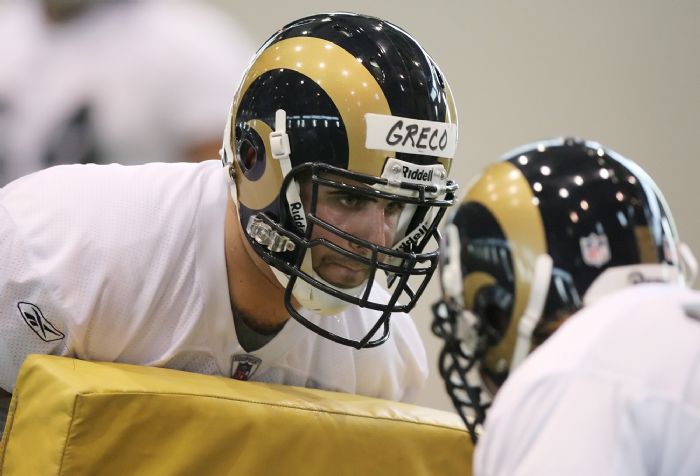 Preseason is over, but the madness has just begun. Teams all over the NFL cut players from their squad and left one executive to say that he believes Sunday will have the most waiver claims and signings the league has ever seen. Here is one player that was drafted by the Rams and makes too much sense to bring back to the organization.

His name is John Greco and he is a former third-round pick from the 2008 NFL Draft. He was selected by the St. Louis Rams out of Toledo. Greco, after three seasons with the Rams was traded to the Cleveland Browns for a seventh-round pick in the 2012 NFL Draft. After that, the Rams continued to have offensive line trouble and Greco started to shine in his new home. Greco even nabbed a five-year contract extension for his production in Cleveland and shortly became known as one of the better offensive guards in football.

Greco played with some serious all-world talent in future Hall of Famer Joe Thomas and Alex Mack. He even took over for Mack at the center position after he was sidelined with a broken fibula. The 32-year old veteran guard was considered a reliable player during his time in Cleveland and just these past couple of days Greco was cut from the Browns. With the combination of the Browns signing Kevin Zeitler in the off-season and Greco coming off the lisfranc injury the Browns found they weren’t going to be able to start him and so they let him go giving him a chance at a starting gig somewhere else.

Last season according to Pro Football Focus, John Greco graded out at an 81.3 overall which ranks him 18th for all offensive guards. That’s already pretty good and probably an upgrade on most teams, but with the Rams they employ Jamon Brown at right guard who put up the 54th highest grade at offensive guard. The Rams may like Brown’s upside, but the bottom line is that Brown has been inconsistent. He’s shown flashes of being a starting caliber NFL guard, but then again he’s shown plenty of miscues that have hurt his team. Brown would be a good backup to have, but as a starter the Rams can’t be too excited. Make no mistake, players get better in the off-season and while Head coach Sean McVay was excited to get Brown going, ever since the preseason started Brown wasn’t the player that McVay had made him sound.

The Rams aside from Brown are looking at a pretty solid offensive line. They signed an All-Pro left tackle Andrew Whitworth to protect young Jared Goff’s blindside. They still have veteran former second-round pick they drafted back in 2010 Rodger Saffold who continues to be solid year in and year out. The Rams scooped up a stop gap center that had familiarity in McVay’s offensive system in Washington, John Sullivan. Plus the Rams have a nice young right tackle that was drafted in the second round of the 2015 NFL Draft, Rob Havenstein. So, if the Rams pick up their old draft pick Greco as a stop gap option for right guard while the Rams try to develop a player like Jamon Brown or even Andrew Donnal that might be the best plan of action. Obviously, with the season a week away, Greco wouldn’t start right away. He would have to learn the system and develop some chemistry with the guys in practices, but if the Rams could get Greco acclimated to the system and ready by week four of the season that would be an upgrade.

Like aforementioned Whitworth, Greco has been a model of consistency. The Rams would likely employ a top 12 offensive line in all of football if Greco came to the organization and especially if he continued to play at the above average clip he’s been playing at for the last half decade.

The Rams starting offensive line with Greco would look like this according to Pro Football Focus.

Keep this in mind as well. Saffold’s grade from last season looks amazing with the fact he had to play on the same side next to Greg Robinson. Plus, Havenstein had to play next to Brown and still ended up with a 78.9 grade. The reason I bring this up is simple. The Rams are going to see serious improvement in the offensive line this season, but if they bring in Greco and install that continuity, you will see players like Havenstein playing at the highest level. Just by having Whitworth next to Saffold you are going to see Saffold more comfortable than he has ever looked. The thing many people seem to overlook is the fact when you have talent and put someone who is below average or an overall struggling player next to that talent. You see immediate regression from that player. One perfect example of this is when you go back and look at former right tackle Joe Barksdale and how he started off looking great, but then the amount of miscues caused by his right guard Davin Joseph disrupted his play and pretty much everyone else’s.

It may seem unfair to bail on Jamon Brown now, but the Rams seriously need to have that reliability in place for at least this year. This is not to say Brown can’t play in this league, this is about Brown developing further with the new coaching staff that are complete teachers of the game. This is so the Rams know they have a reliable veteran that has logged many quarters in his career and this is so the Rams have a veteran presence that takes the load off of the young talent on offense. Greco is an ideal offensive lineman and his forte is in the run blocking department. Todd Gurley, last year had a rough time finding anything, but opposing defenders in his face. Greco would continue to add to the new look Rams defense and allow Gurley some help with his run blocking as well as Havenstein on the right side.

The first step to fixing any problem is realizing there is one. The Rams have done a nice job in fixing many problems this off-season, but they now have an opportunity to fix one of the biggest ones and most important ones. The Rams need to sign John Greco and bring him back for round two with the organization.