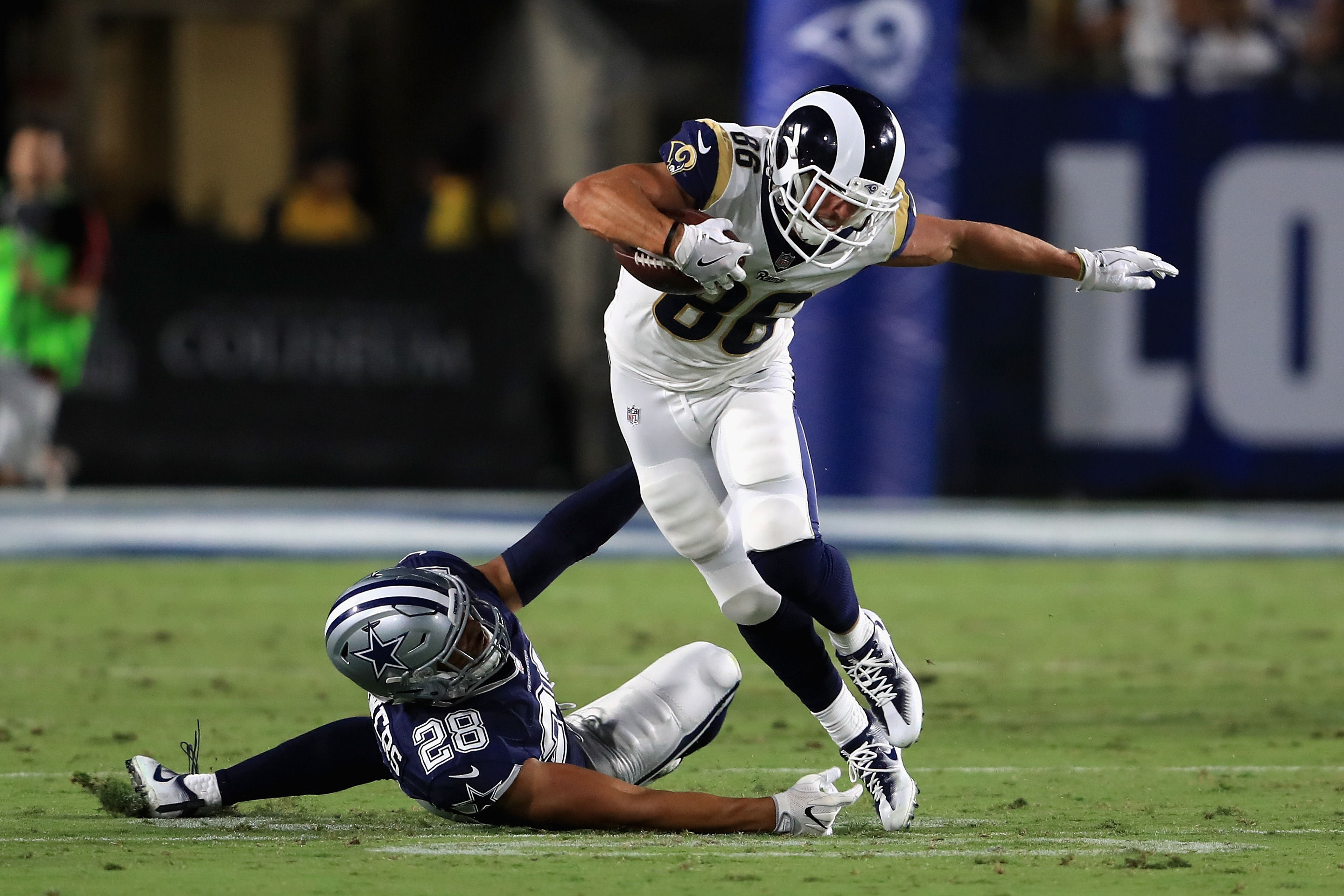 On Saturday, the “Fight for L.A.” will really begin as the Rams face off against the Chargers in the Los Angeles Memorial Coliseum. While many outside observers will be focused on which of these teams will be setup for long term success in Los Angeles, many players will just be fighting to make a roster. Here are three players who need to really stand out these next two weeks if they want to make the Rams’ 53-man roster.

While Spruce is a fan favorite, he has not done much to stand out in the preseason games. He saw more action against the Cowboys than the Raiders, and did not show anything approaching the fireworks we were treated to a year ago. This is a group with a lot of depth, something no Rams fan would have predicted at the end of last season. The fact is that there are four receivers who are guaranteed roster spots, and three more who are recent draft picks in Mike Thomas, Pharaoh Cooper, and Josh Reynolds.

With Mike Thomas and Josh Reynolds performing well against the Raiders last week, Spruce’s tenure as a Ram begins to look more tenuous. While it would not surprise me to see him make the 53-man roster during the first four weeks of the season, it would surprise me if the Rams favored Spruce over Thomas when the latter returns from suspension. Reynolds has seen very limited action, but the 20-yard game winning touchdown he caught last week showed the Rams why they drafted him.

If this is an offense that likes to have receivers fit into the various receiver archetypes, Nelson Spruce falls undoubtedly into the same category of slot receiver with Pharaoh Cooper and Cooper Kupp. When you consider that many downs will be played with two receivers on the field, it doesn’t make sense for the Rams to keep so many slot guys. Nelson Spruce will need to perform exceedingly well over the next two weeks to earn a roster spot.

Murphy’s stock is on the rise after he performed much better against the Raiders than the Cowboys. However, I still believe that Andrew Donnal will be the Rams’ swing tackle. Murphy could be the odd man out.

The tape he put up against the Cowboys was horrendous, and he was consistently the weak point on the backup offensive line. Last week, the line provided mostly clean pockets for Goff and Mannion, so Murphy did little to separate himself.

Pace Murphy is going to have two more games to try to stand out, so he will need to continue with improvement, or he could find himself out of a job come final cuts.

I would love to see a complete game out of Justin Davis this preseason. Against the Cowboys, he was an explosive and savvy runner who found holes and exploited them for big games. He also fumbled twice, and was responsible for a costly holding penalty when asked to pass protect. The potential was definitely there though.

Against the Raiders, Davis looked like the complete opposite. He struggled to find holes and was constantly dropped for lost yardage. However, he was an active participant in the passing game, and had no problems with ball security.

Davis has the potential to be a good backup running back, especially given the explosiveness he played with against the Cowboys. He is competing with Aaron Green and Malcolm Brown for a backup spot, and it would be surprising if the Rams kept more than three backs on the final roster. If he can put it all together at some point in the next two weeks, do not be surprised if he moves up the depth chart and finds himself on the 53-man roster.